The Star Wars Dark Side Half Marathon Weekend had finally arrived! I was so excited for this weekend for such a long time. I registered for the 5K back when it first went on sale in September 2015. At that time I hadn't even run my first race at all, but I thought a Disney race would be super fun and I knew they had a reputation for selling out. The Star Wars theming and the fact that it was an inaugural race weekend were also very appealing. Arthur and I both signed up for this race and were looking forward to running it together.

Very shortly afterwards, I started to regret not signing up for the 10K race instead (or perhaps as well). When I signed up I wasn't even sure I'd stick with running, but I knew that Disney races were relatively walker friendly (especially the 5Ks). As the weeks went on though, I started to love running more and more, and I knew I could be ready for a 10K by the time race weekend came around. A couple of months later I regretted not signing up for the half marathon itself! Of course that did end up happening eventually... read about that in the half marathon race report.

Sometime in late fall, Arthur got invited to an important work conference that would take place over most of the weekend. So I'd be running the 5K by myself. This was a huge bummer but I still tried to look forward to the weekend.

The race would take us from the Epcot parking lot, through parts of World Showcase and Future World, before returning to the parking lot to finish the 5K race.

Training & Goals
This weekend was all about the half marathon. I had been training for that race since mid February. I had also been regularly running 5K races for several months prior to this race, and had very happily finally run a sub-30-minute race the week prior.

Disney 5K races are true "fun runs" -- they are not timed. So my only goal here was to PR in fun. Prior to the actual race I had the idea I would stop for every character photo opportunity, in both the 5K and on Sunday during the half marathon. That strategy did not hold (read on...).

I dressed up as Rey from The Force Awakens in a costume I pieced together from thrift store finds and some fabric scraps. I had other ideas about this costume (a mashup of Rey with Mr. Ray from Finding Nemo) but they ended in disaster and should rather not be spoken of again. The Rey outfit as I ended up wearing it was far from ideal and my sash flopped around in a rather unsightly fashion. My running photos are not good. Not good at all.

Race Day: April 15, 2016
The race was set to start at 6AM and it was suggested we be ready in our corrals at least 30 minutes prior to race time. I left home at 3:45AM to get to the Epcot parking lot in time. Parking was uneventful and I was able to get into my corral, E (second to last) in plenty of time. Unfortunately I didn't realize there would be character photo opportunities before the race so I arrived too late to have my picture with any of them -- the lines were already closed by the time I got there.

It was a warm 70° and muggy at the start. The runners in corral A started on time at 6AM but the rest of us were sent off at regular intervals. Each corral had a separate starting fireworks blast. According to my Garmin I crossed the starting line at about 6:24AM. 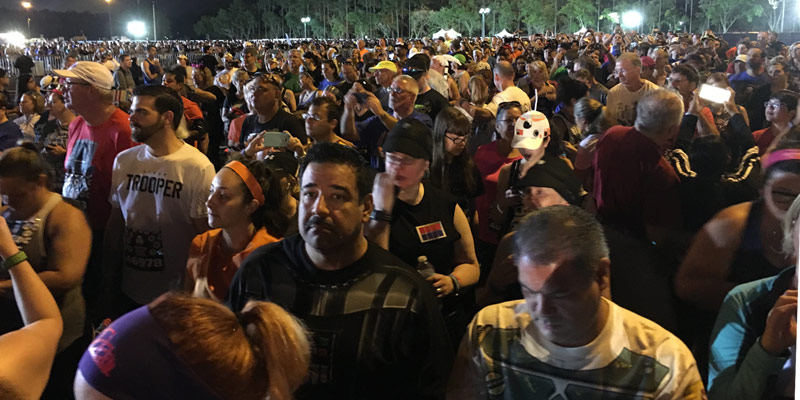 Lined up at the front of corral E, looking back at a ton of runners! 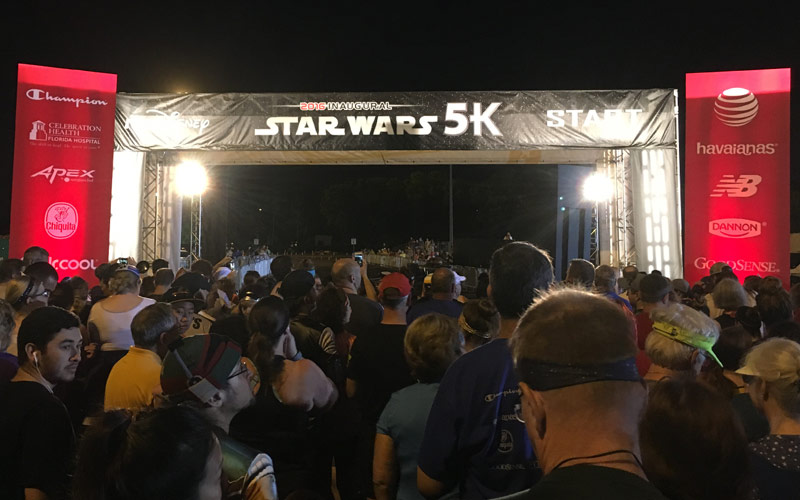 I did my best to be at the front of the corral for the start!

Mile 1: 12:58
Participants were walking from the start so I did a lot of dodging around folks for this mile. Because of this my GPS data is a bit skewed, but it's still funny to see -- check out my Garmin Dark Side 5K summary. You can see I stopped briefly at the first photo op on course -- a disembodied Scout Walker leg shrouded in smoke. There were no cast members or photographers here, so I asked the runners behind me in line to take my picture. 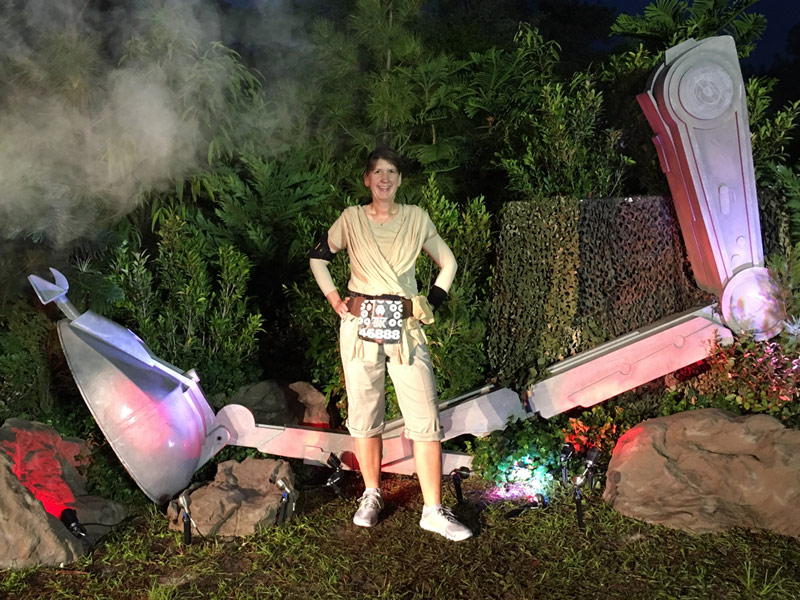 Mile 2: 28:29
My slowest mile ever! I stopped (turned around actually) to have my photo taken with R2D2. It was first depressing and then alarming to see all of the runners passing those of us who stood in line to have our photo taken with the droid. It was shortly after this, back on course, that I passed the official Mile 1 marker. I was among run/walkers from corral F now. But I like to run, so I did my best to slalom around everyone and that was a lot of fun. Though I really liked getting my photo taken with R2D2, I decided stopping for photos might not be my thing after all. 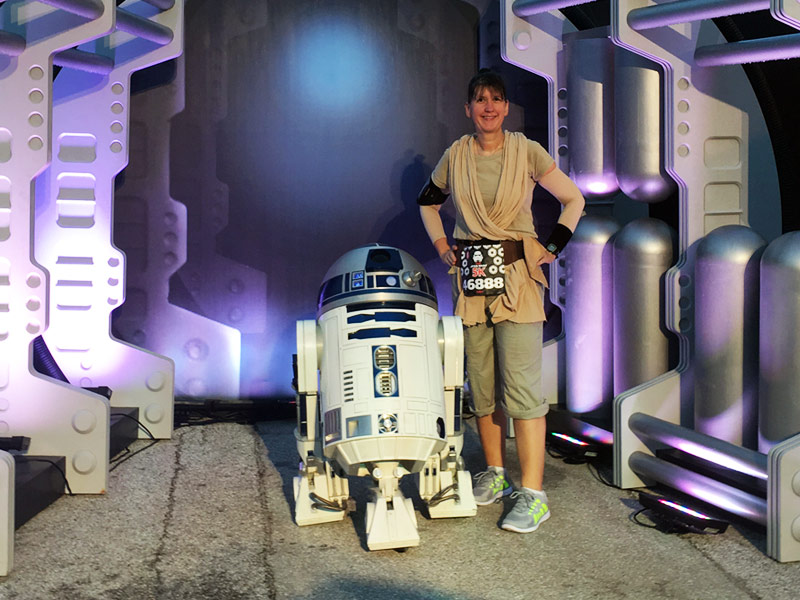 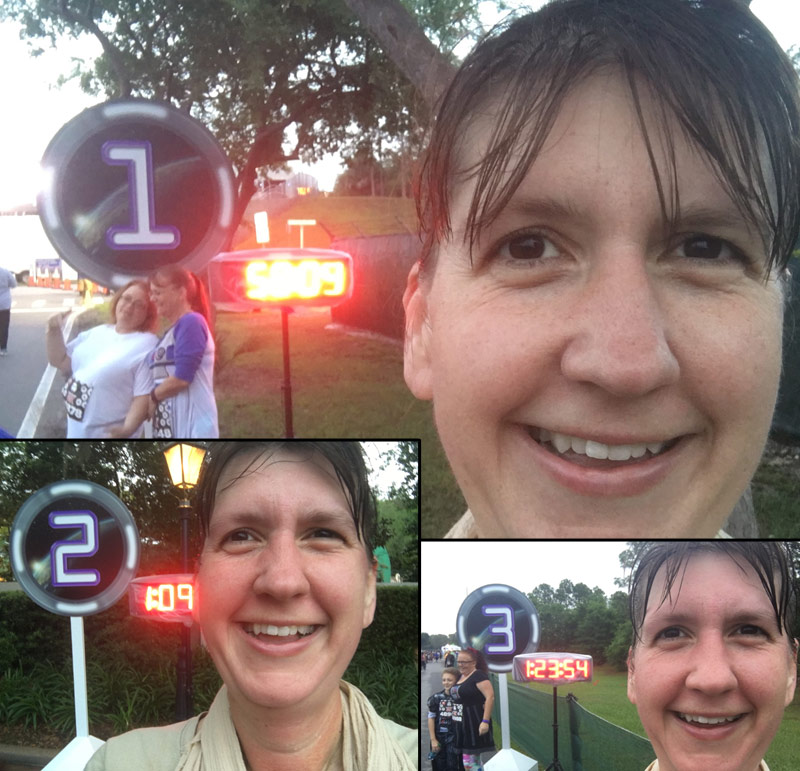 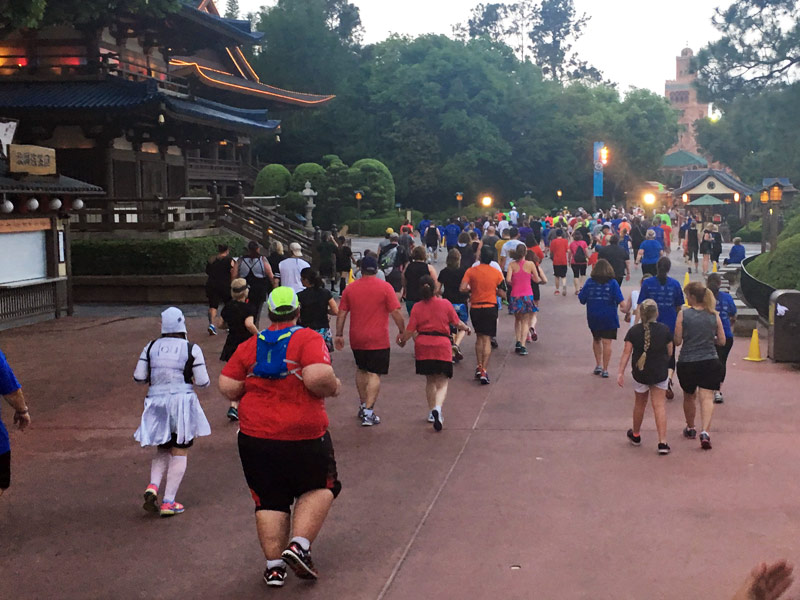 Running through Japan on the way to Morocco

We entered Epcot at Mexico and shortly passed another photo op - Sabine and Ezra from Rebels. They posed in front of a Tie Fighter. I snapped a quick photo on the run and kept going. We exited the park briefly by France and passed another photo op, this time with Chewie. I can give him a hug any time I want at Hollywood Studios so I snapped a quick selfie. We passed the Mile 2 marker shortly after.

Mile 3+: 13:55, 8:38
Back in Epcot to finish World Showcase, race through part of Future World and then back to the finish at the parking lot. Before Spaceship Earth I stopped to take a selfie in front of a couple of Stormtroopers. Another runner offered to take my photo and though I didn't really want to, I thought it would be rude to refuse. After she snapped a couple of terrible shots of me she asked me to return the favor. I did so and was about to run off when another runner asked if I'd also take her picture. What the what? I said, "Sorry, no time, gotta run!" and took off. Maybe well over an hour into a 5K it was stupid to want to keep running, and I felt bad afterwards. But I think it's not unreasonable to take the photo of just one other person per op during a race. Sorry random runner, I hope you found someone to snap your picture!

I got my banana and RunDisney snack box and sat down on the asphalt to rest and text Arthur. After sitting for a while I saw that again I was missing photo ops -- many of the characters and scenes from before the race were available again! Argh! I got in the huge line for a pair of Stormtroopers and got my picture taken with them. By the time I was done there was hardly anyone left and all of the other characters (and photographers) had gone. I had to ask fellow runners to take my picture at the remaining non-character photo ops. There were less than 50 runners left by this point and I thought it was a bummer the characters (Darth Maul, Captain Phasma, etc) couldn't stay out for a few more minutes so we could all get pictures. 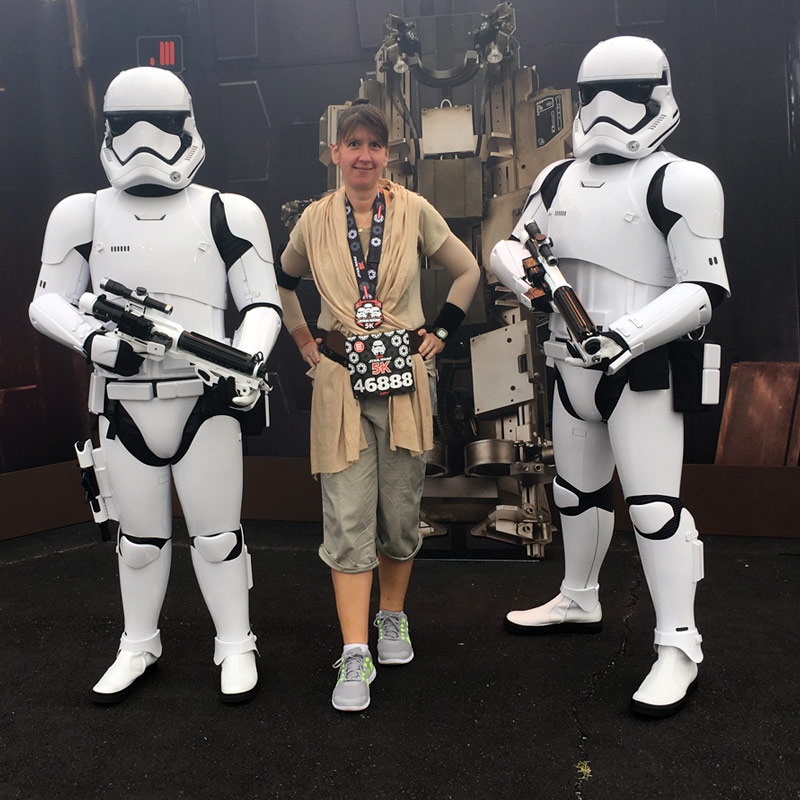 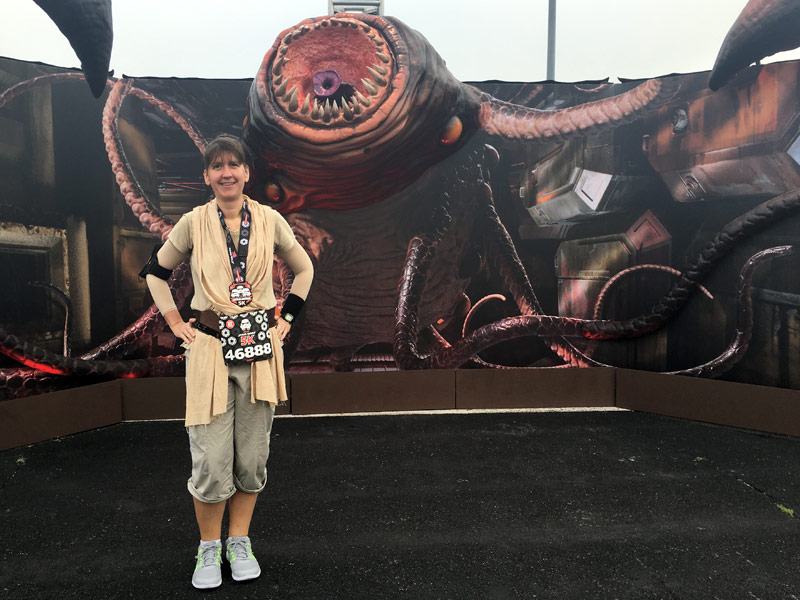 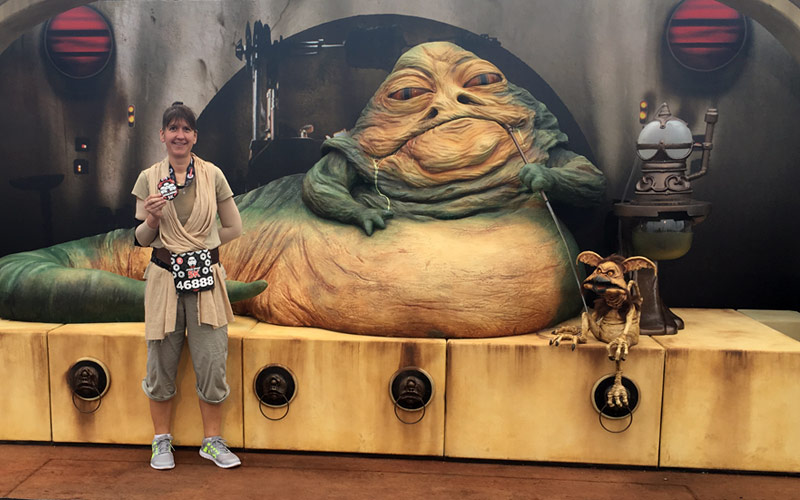 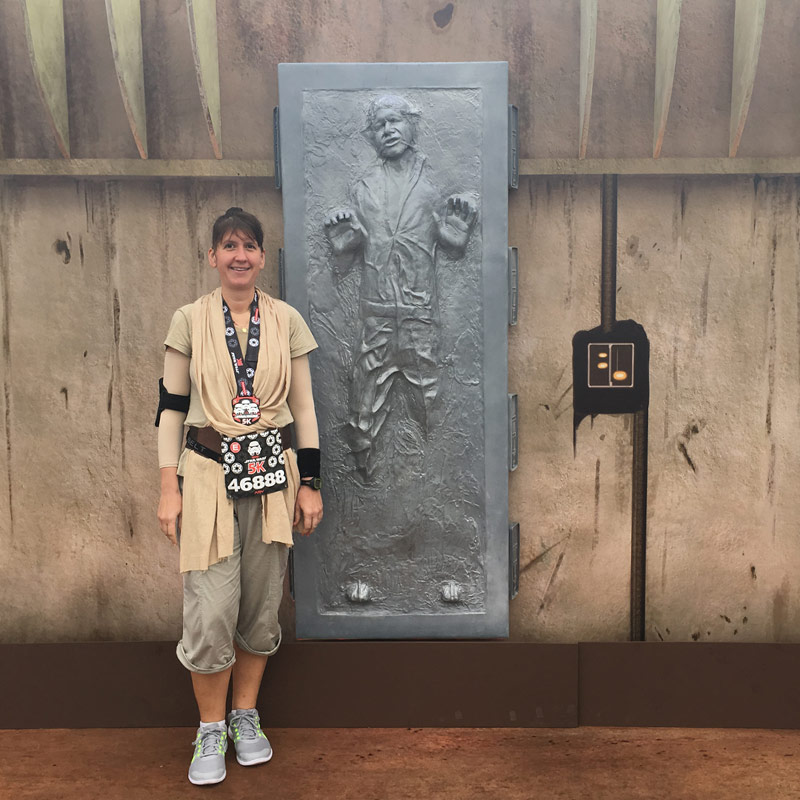 After getting my photo with Han in carbonite I headed back to the car. I had breakfast and a quick change of clothes at Art of Animation resort (the best food court!) before heading to Hollywood Studios for a celebratory Darth cupcake and a few more character photos. 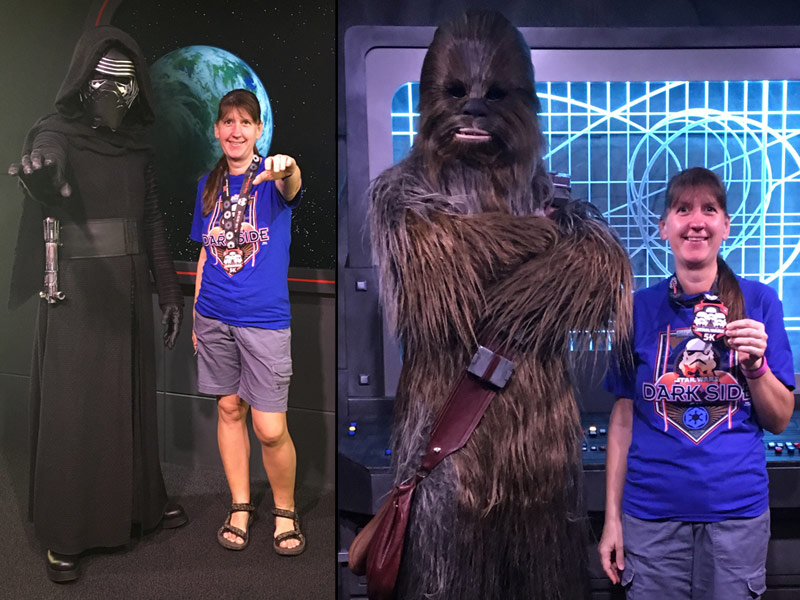 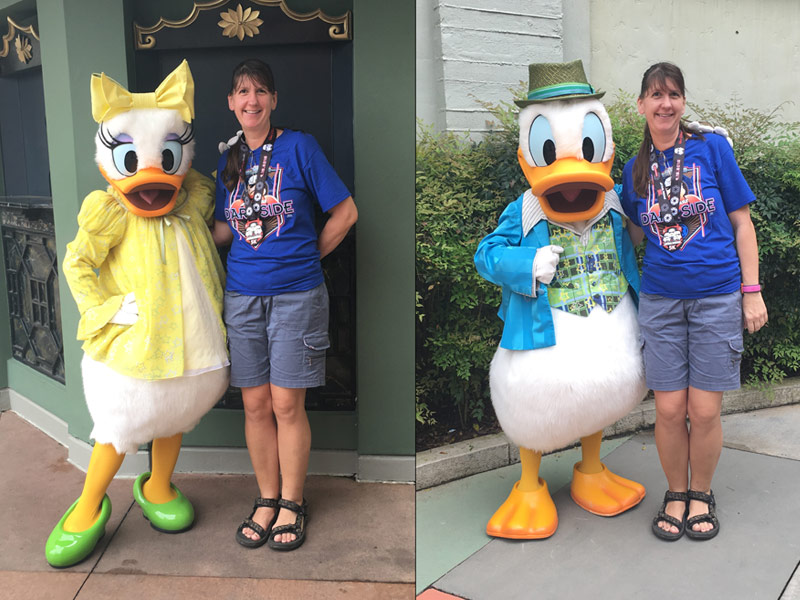 Before heading home I stopped at the expo to see Jeff Galloway and RunDisney nutrition expert Tara Gidus give a brief talk on first half marathons. And a couple more photo ops. :) 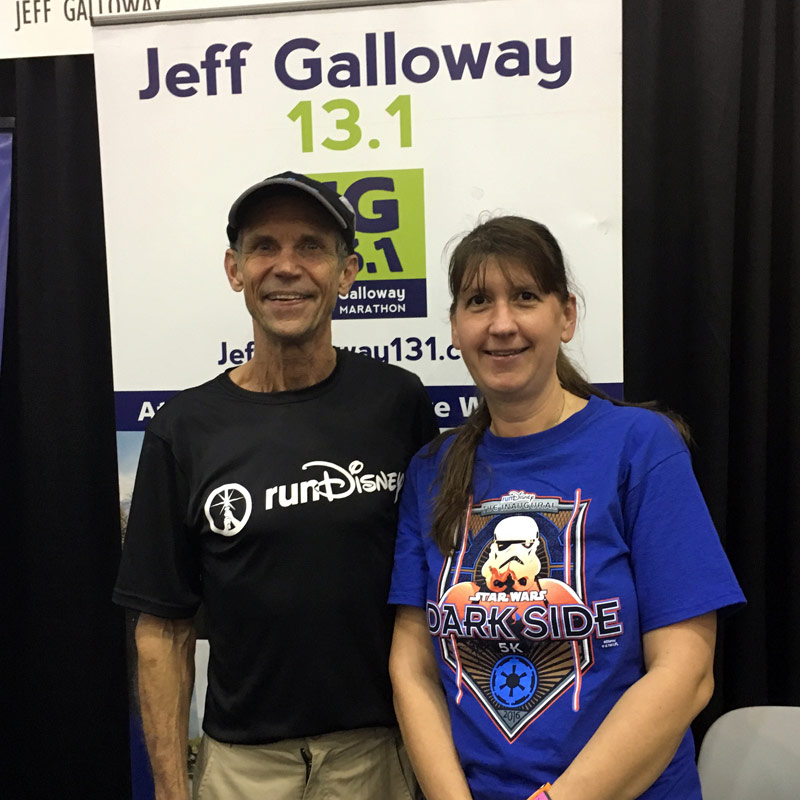 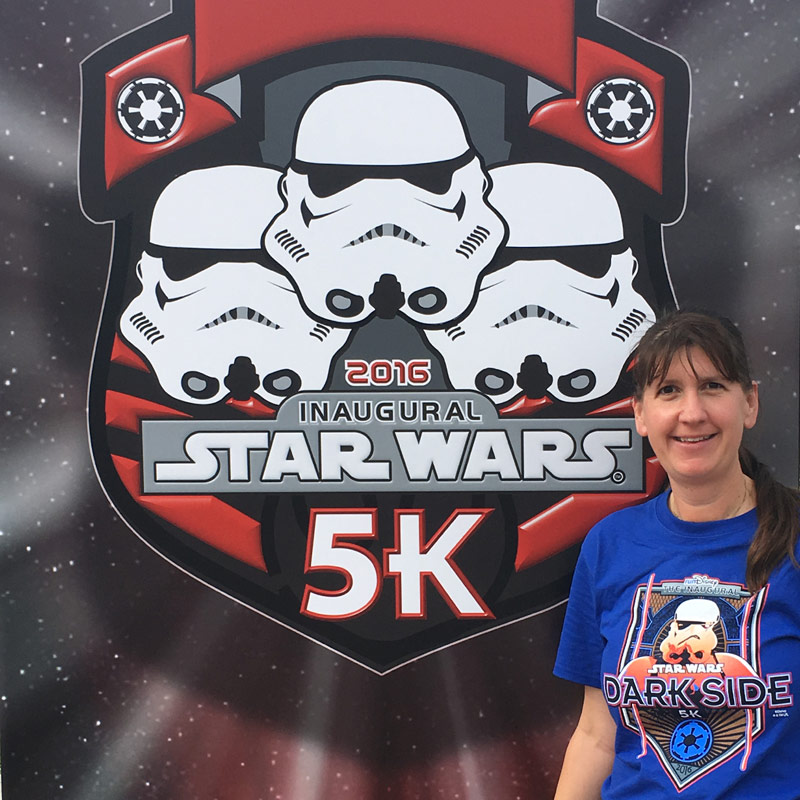 Garmin GPS time: 1:04:00. Strava accounted for all of the stopping and gave me a bit better time of 35:47 for 3.5 miles.
Race Amenities: Swag included a cotton shirt and a rubber medallion. Lots of opportunities to get free stuff at the huge race weekend expo. And, of course, running a super fun Disney course through Epcot with Star Wars characters, music, and theming!
Cost: $80.38 (including $5.38 fees from Active.com) 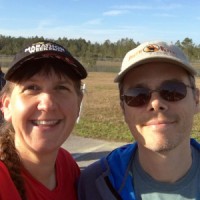 I ran the Belle Terre Bobcat 5K on February 10th. Proceeds from this race go to support student programs at Belle Terre Elementary School in Palm Coast. The race was accompanied by a cute little health fair with local vendors, as well as a free pancake breakfast for... 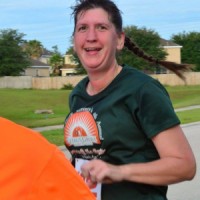 The DeBary 5K is sponsored in large part by a local contracting company, DBK. Proceeds go towards DeBary Elementary School and the Kruid Foundation. The 2016 race was the 2nd annual. Training & Goals I had just come back from a 10-day holiday in Costa Rica...