The 2018 Dopey Challenge concludes with a full marathon! My first 26.2!

This MAGICAL course takes runners through all four theme parks in Walt Disney World, plus the ESPN Wide World of Sport complex.

For my first full marathon I decided to wear a shirt with my name boldly printed on the front. I got an obnoxious neon greenish yellow tech top with the balloons from UP printed on the front and back. On the back I added the slogan "26.2 Miles of Adventure are Out There." 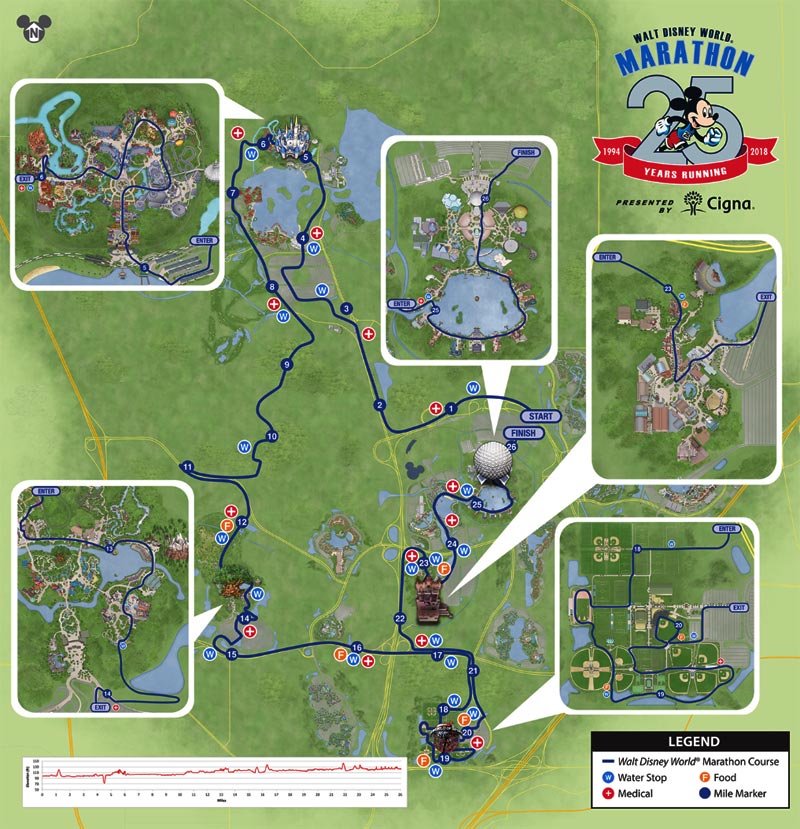 Training & Goals
The last 3+ months had been all about Dopey training, with the goal being to finish all of the races and have lots of fun. I wanted to enjoy every minute of the full marathon! I was hoping to arrive in Animal Kingdom at the right time to be able to ride Everest, to pet all of the animals, stop for some character photos, and to take a funny picture with the grave diggers.

Race Day: January 7, 2018
Arthur and I left our All-Stars room at 3:52AM and arrived in the Epcot parking lot at 4:04AM. We sat in the car for about 20 minutes before heading out to the staging area so I could get one last photo with the Dope before running. Yay, I got him each morning!

It was another cold morning, but I was prepared. I had on a throw-away hoodie and wore a thermal shirt and extra arm sleeves under my shirt. Again I picked up a discarded blanket to keep my legs warm in the corrals. 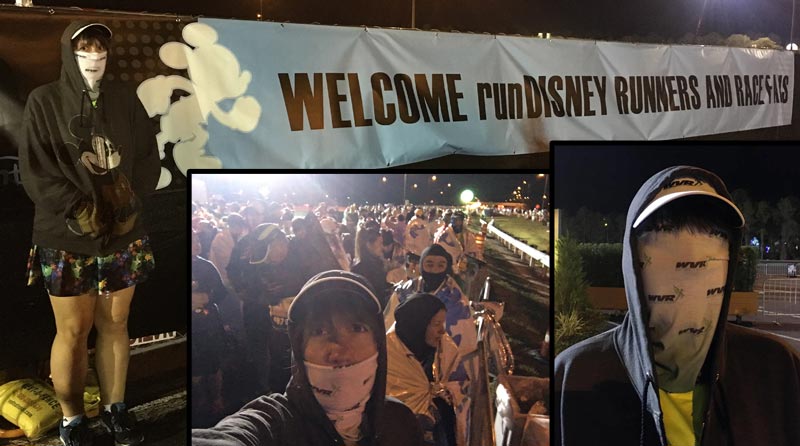 At the end of the 26.2 mile run my Garmin had me at 27.7 miles. I'm not going to post my Garmin mile splits below, just the official timing mat splits from runDisney.

Around the Mile 2 marker I was running along the left side of World Drive in a very wide part of the course. It was really dark and people were thinned out. I heard someone go down hard to my right, and looked over to see someone had fallen on the other side of the road. Several people stopped to help. The injured runner was wailing and it was so heartwrenching. It sounded like such a hard fall -- her race was almost certainly over, if not worse. I almost started crying. It was terrible. About a half mile later we came across bike medics and several runners in front of me told them they were needed back up the course.

Sometime after the Mile 3 marker I heard the theme to Ducktales and knew I would be making my first character stop. 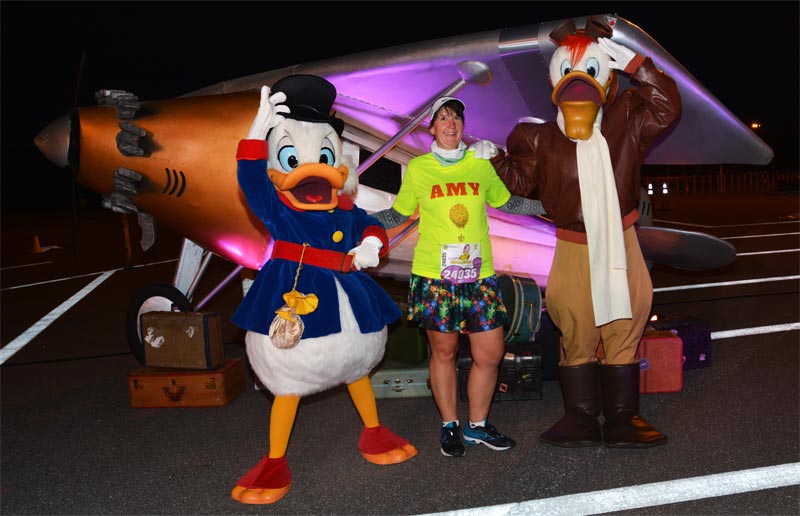 I dropped my hoodie before reaching the Magic Kingdom. It was an old well-loved Mickey Mouse zipped hoodie that was too big for me after weight loss but I'd held on to it. My first marathon felt like an appropriate last hurrah. Thanks for your service, hoodie. LOL

Mile 6-10 | 10 Mile Split: 2:33:51
Another fun mile run through Magic Kingdom! I saw Arthur at the same spot on Main Street and then I was able to spot him as I ran through the castle, but he didn't see me.

This guy ran in front of me by the photographers outside the castle. I'm not even mad. LOL 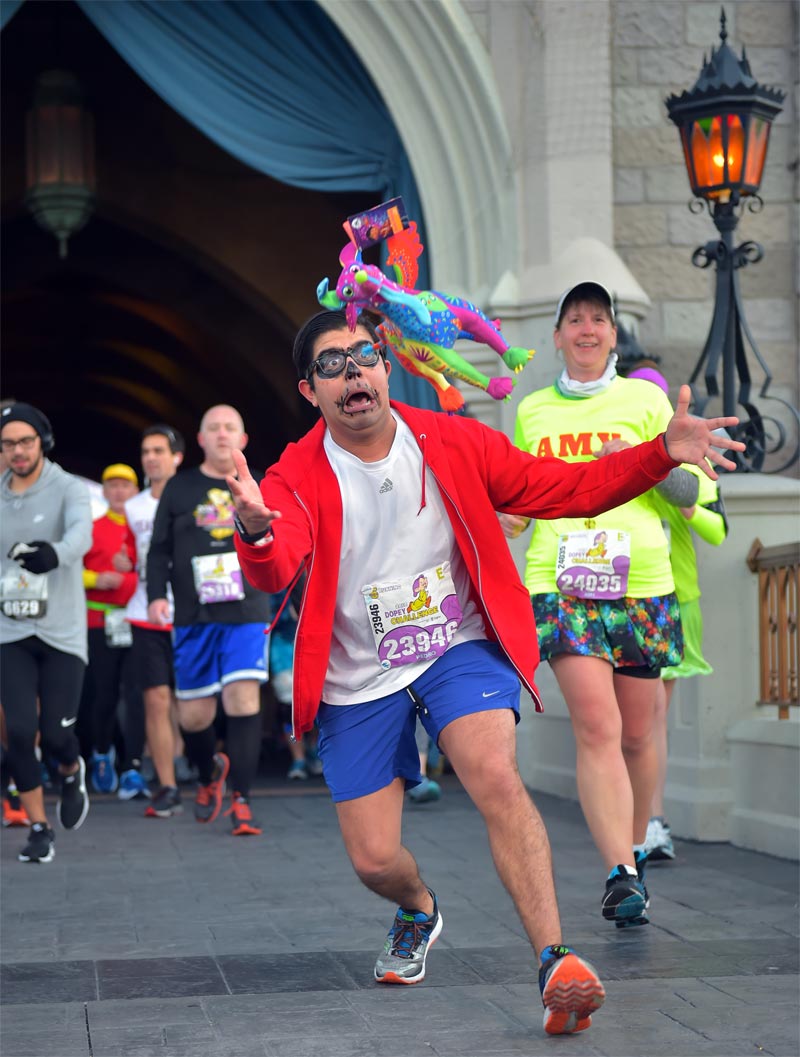 Backstage at Magic Kingdom they had the steampunk dragon from the Festival of Fantasy parade out and it was really cool to see up close. Too bad it wasn't breathing fire -- it was still cold. 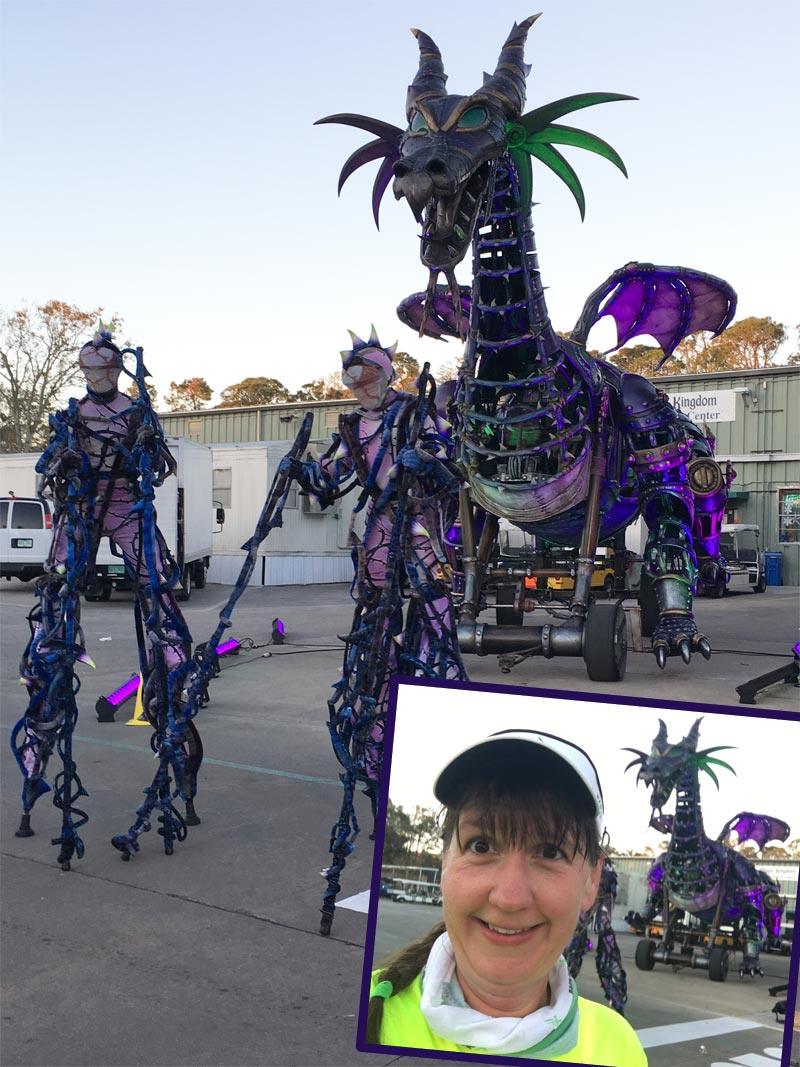 In Mile 9 I stopped again for another character photo -- Russell, Carl, and Dug from Up. I mean, when your shirt refers to the characters, you have to stop, don't ya? 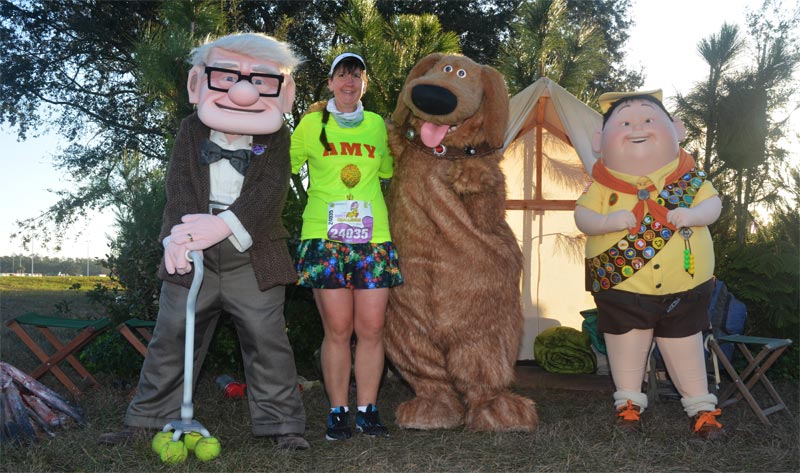 Further down the road there were old ride vehicles and other Disney artifacts set up on the side. I'm still trying to figure out what everything is, but some of them I know. The ride vehicles are an old nautilus from 20,000 Leagues Under the Sea, plus vehicles from Mr. Toad & Snow White, an old Space Mountain shuttle, and a skyway bucket. Some of the large heads are old float decorations from a food court at Port Orleans. I don't know about the bears (Club Cool? Maelstrom?) or where the Finding Nemo tiki head aquarium decorations were originally found. 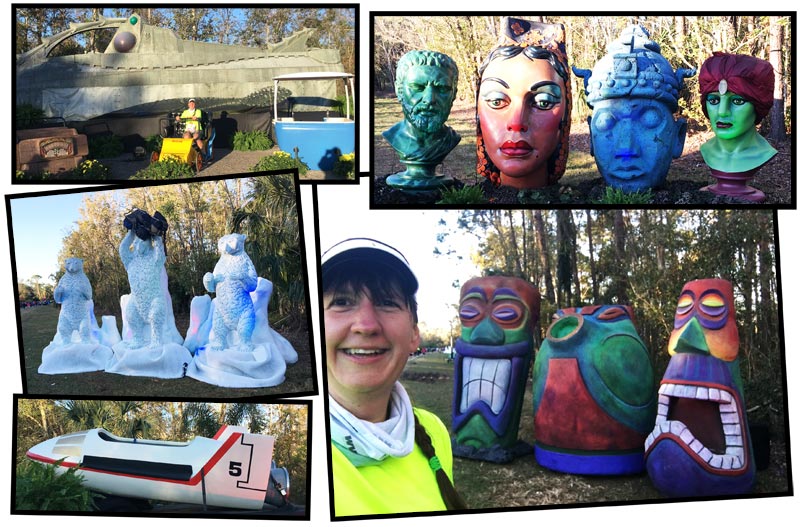 Around here I was excited to see the Adventurer's Club out for photos. I had regretted running by them during Wine and Dine last year. 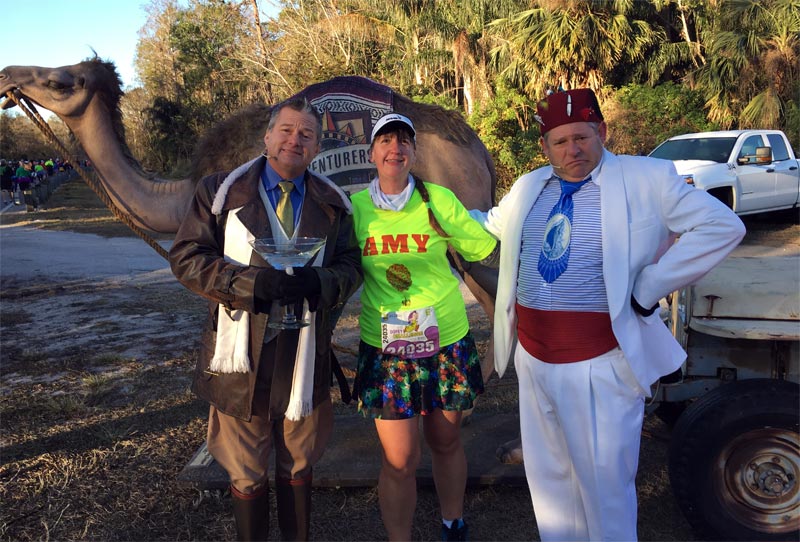 Some more back road miles brought us through a stinky waste water plant on our way to Animal Kingdom.

Mile 11-13.1 | Half Split: 3:17:43
A little out-and-back on Western Way and another couple of back road miles were up before we reached our second park. In Mile 13 we were offered bananas but I didn't think I would be able to stomach one. I was keeping with my gel / sport bean / salt tablet routine and felt fine so far.

Before entering Animal Kingdom I saw a big bunny out for photos. I got excited because there were so many animals out for the runners last year, but as I ran on I didn't see any more animals. No goats, no pigs, no hawks, no horses. I was bummed.

Mile 14-20 | 20 Mile Split: 5:24:24
I reached Everest at around 9:15AM. There were so many excited runners in the single rider line! We tried to gauge how long we'd have to wait and some runners who were tracking the balloon ladies (effectively the last runners before the sweepers come through) let us know we had about 40 minutes on them. I was seated by 9:29AM. 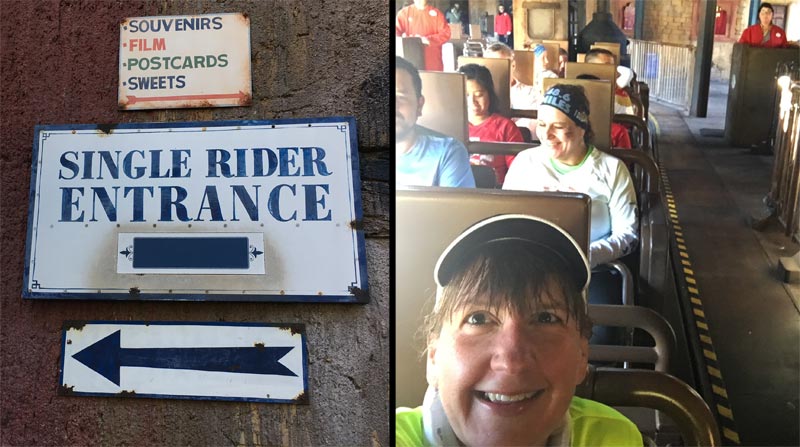 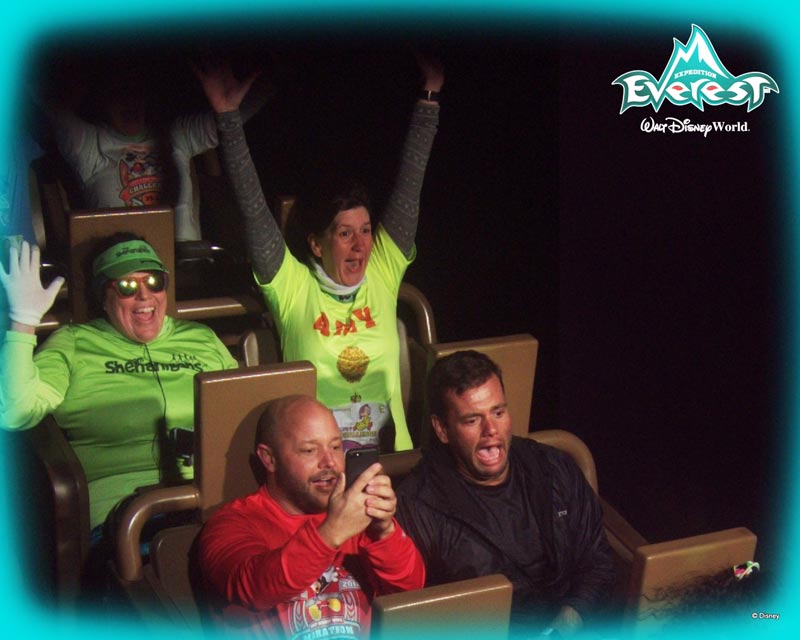 Arthur found me outside of Animal Kingdom and walked with me for a little bit. It was great seeing him again on the course. I am sure I was completely giddy from being able to ride Everest so I'm not sure I made any sense talking with him.

So I really thought I was paying attention and taking everything in, but somehow in the Animal Kingdom parking lot I completely missed seeing the grave diggers! I only found out about them after the race was over -- I thought they just weren't on the course. Sad face.

Back out of Animal Kingdom we ran on to our next destination -- Wide World of Sports. 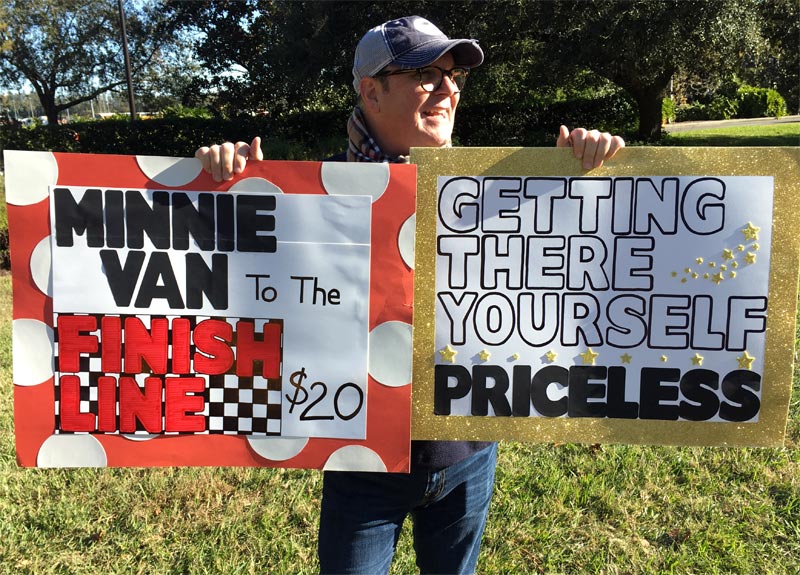 There were few spectators here but some characters and, for me, a couple of familiar friendly faces. Two club members were course marshals in WWoS, so I got to shake hands with Naymond and took a selfie with Diane. Diane also got a photo of the back of my shirt. 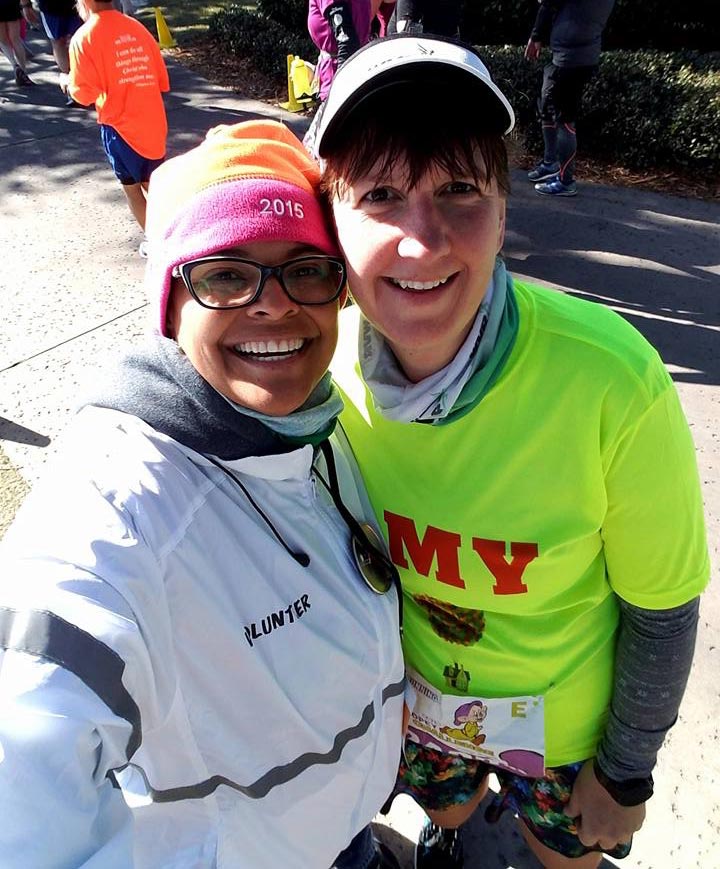 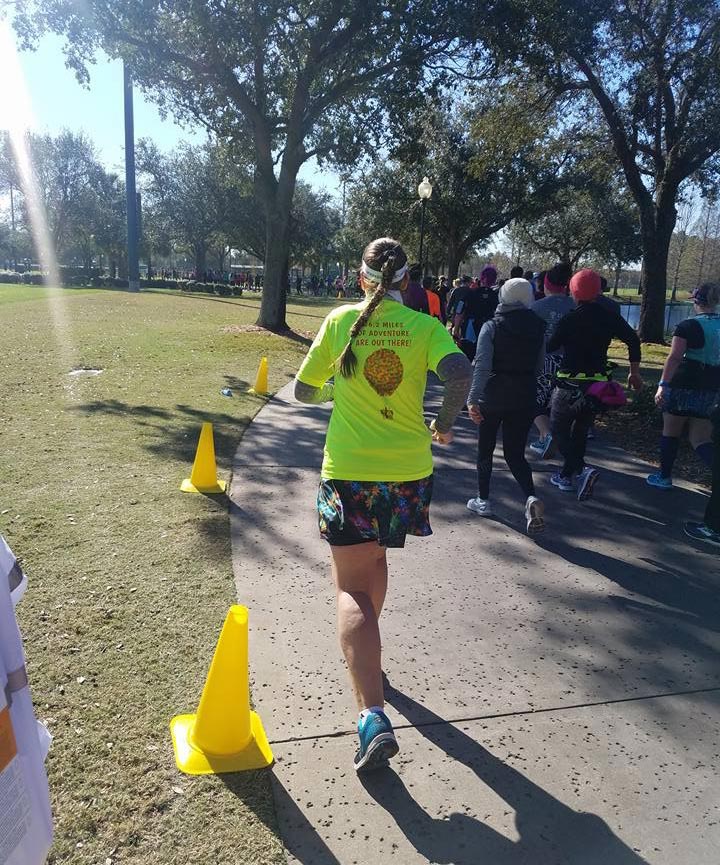 Thanks for sharing your photos with me, Diane. ♥

Mile 21-26.2 | Finish: 6:59:33
After WWoS we had just five miles to go, with lots of characters and other stuff to look at. We ran through Hollywood Studios and Boardwalk before finishing with a run around Epcot.

I had thought it would be fun to get a margarita in Mexico to have for the last mile and finish line. For the last few miles of the race I kept checking my watch, struggling to calculate my projected finish (race brain, I can't math after 3 miles). Anyway, it seemed like a sub-7 hour finish was possible if I didn't stop. I didn't wait for a nice blank slate for photos by mile markers 25 and 26 because I was looking at my time. I'm glad I did because I squeaked in just under 7! 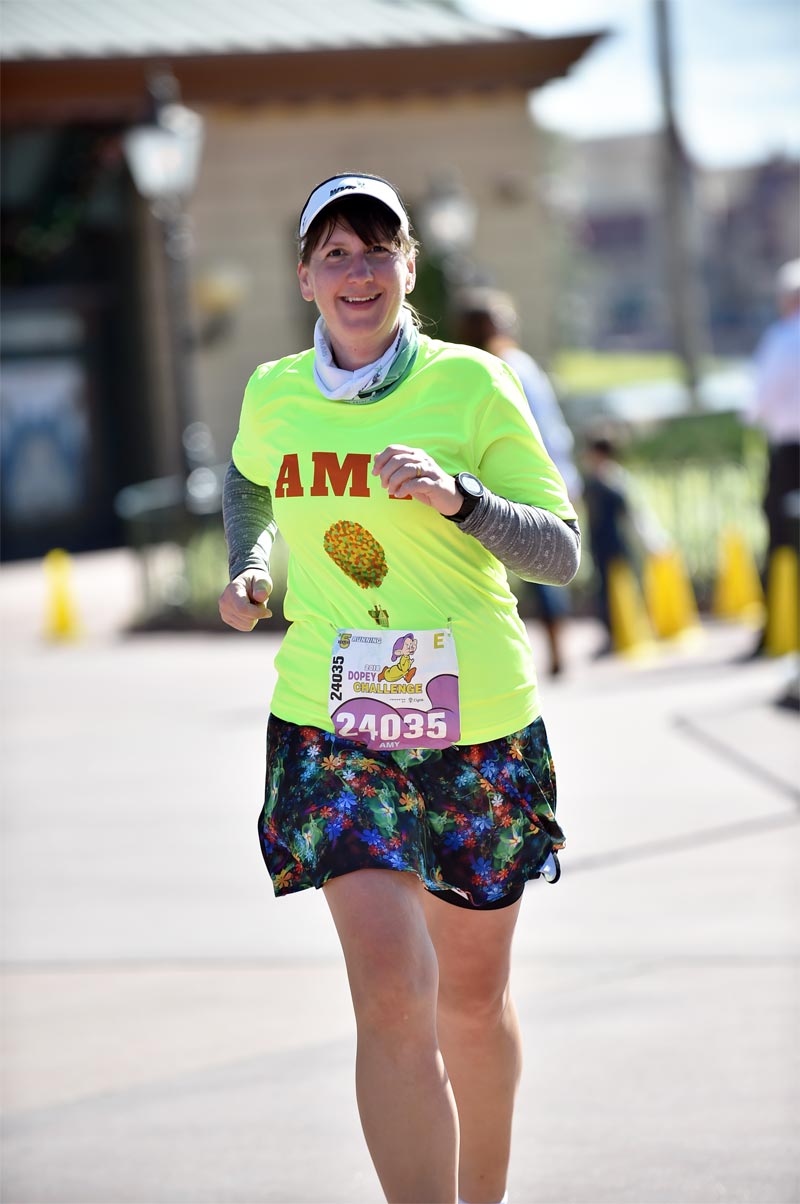 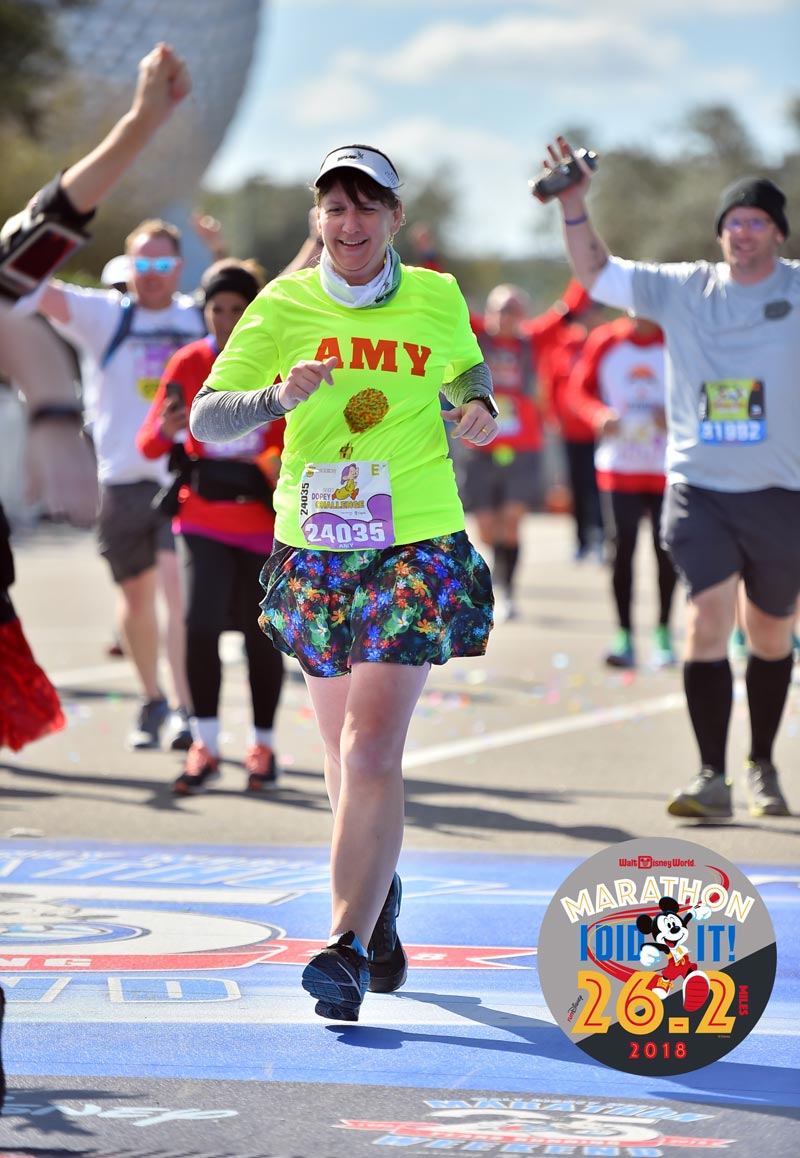 After the Race
I got my marathon medal and found Arthur spectating right after the finish line. He handed me my other medals. 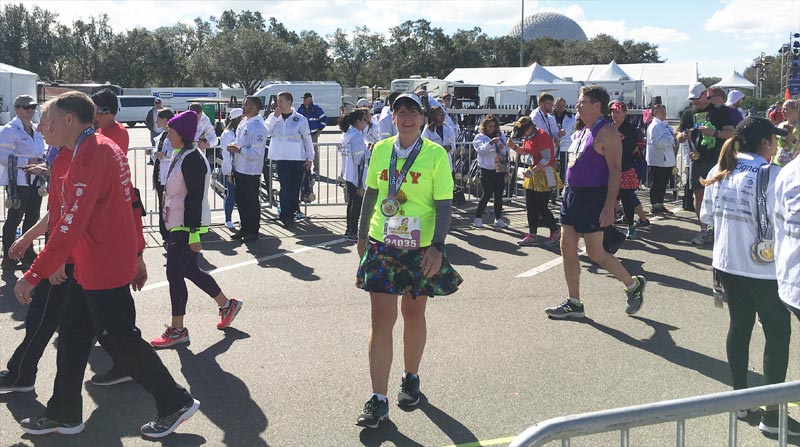 I got a water and a banana and a snack box. I scooted over to the challenge medal tent for my Goofy and Dopey medals. Further down the chute I saw volunteers handing out something else to runners but I couldn't see what it was. Surprise! They were giving us special Mickey ears for the 25th anniversary of the marathon. I took "I Did It" finisher photos with all of my medals and reunited with Arthur. The line for Donald was short so I had a finisher photo taken with him, too. 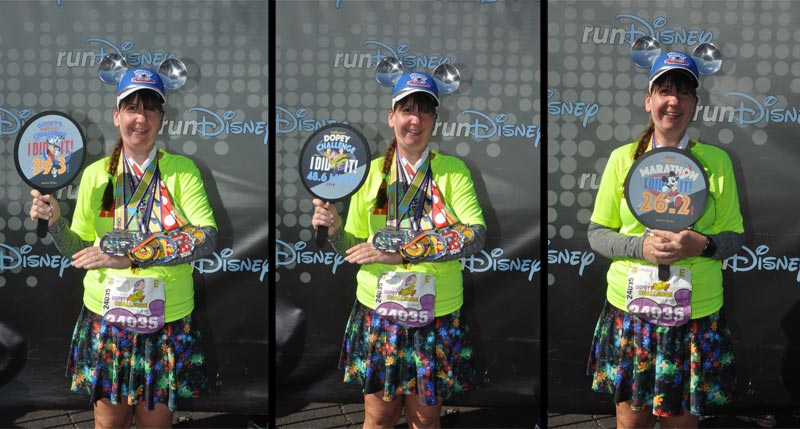 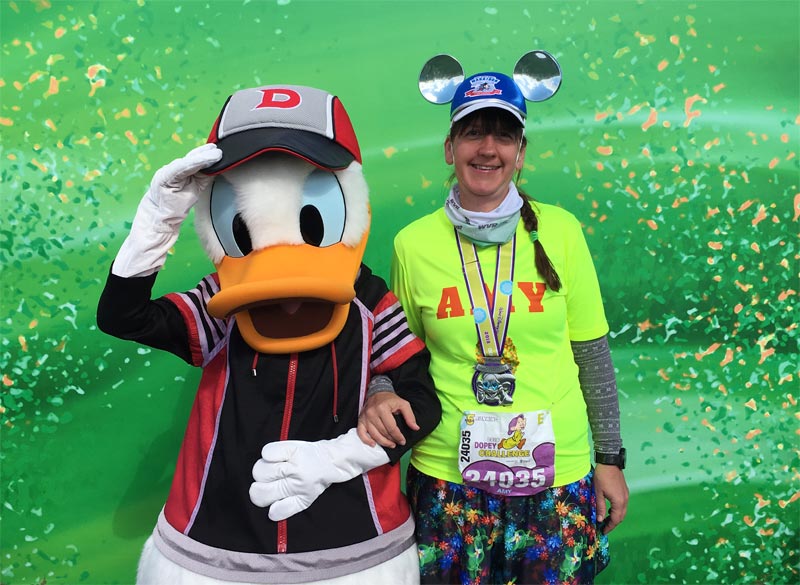 I got a big beer and saw Amanda and Carrie from my running club walking by. It was also Amanda's first marathon. I don't know what I said to them but I am pretty sure I was still grinning from ear to ear like a lunatic. It was SO MUCH FUN! 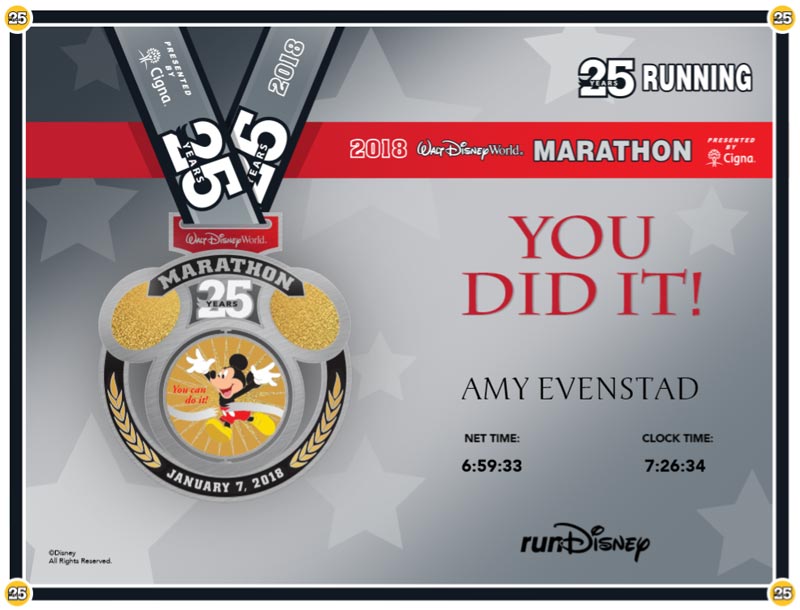 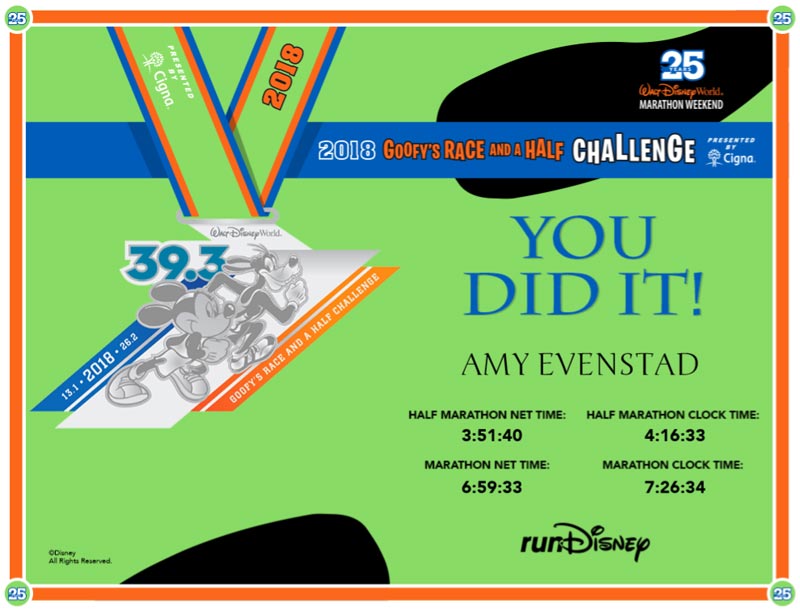 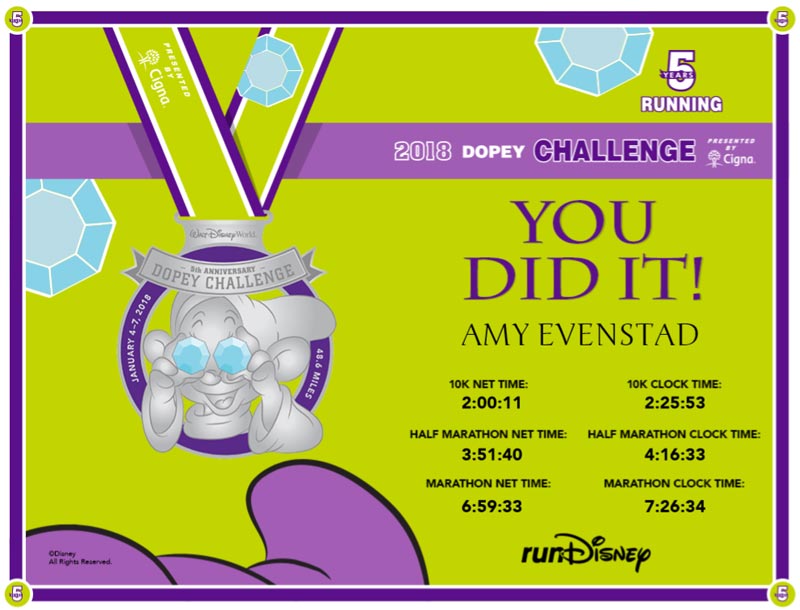 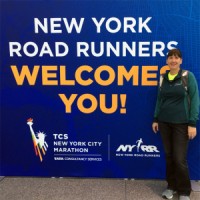 Back in February 2018 I entered the New York Marathon lottery, along with 105,183 other hopefuls. The day after my birthday I found out that I was among the lucky 14.9% to get in via the lottery. First reaction: OMG! Training began on July 2nd. I was getting...