Universal Studios Orlando had their inaugural running events for the general public in the form of a 5K and 10K race over the first weekend of February. I signed up for both races when registration opened up. Arthur surprised me by signing up for the 5K about a week before the race.

Race Goals
Arthur's not a runner, but he can walk faster than me, and he can sprint faster than me. We didn't really make a plan except to try to stay together, which didn't end up working very well. We also wanted to be able to stop for some photos and to meet some characters. We had no time goal in mind. These races both had a very generous, walker-friendly pace. The minimum was a 17 minute mile for the last starters.

Race Day: February 1, 2020
We left home around 4:30AM and made our way down to Universal. We had the car parked by around 5:15AM. The forecast for the morning was comically bad: the last time we checked, there was a 90% or more chance of rain between 6AM and 9AM. 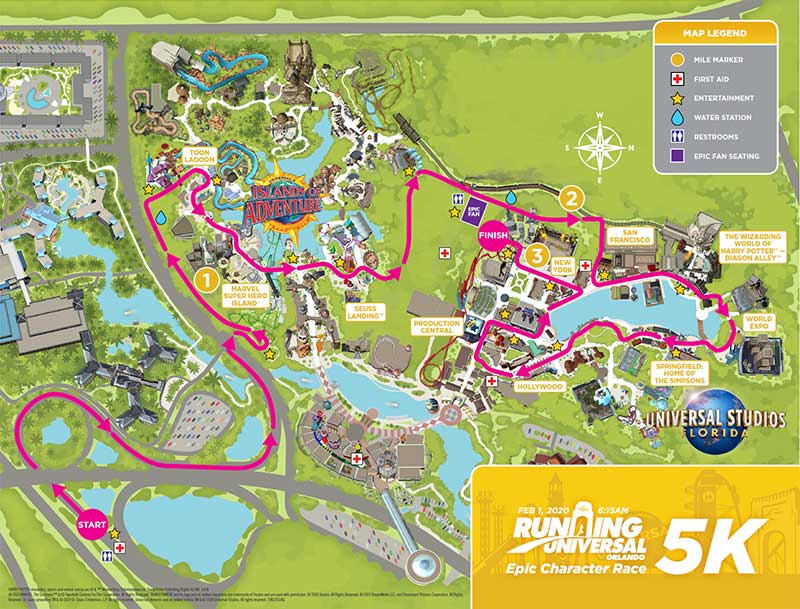 The start line was close to another part of the parking garage, so we were under cover for the walk towards the start. Real restrooms were available in the parking structure hub and there was a group of porta-potties as well as drinking water available for participants close to the starting line. 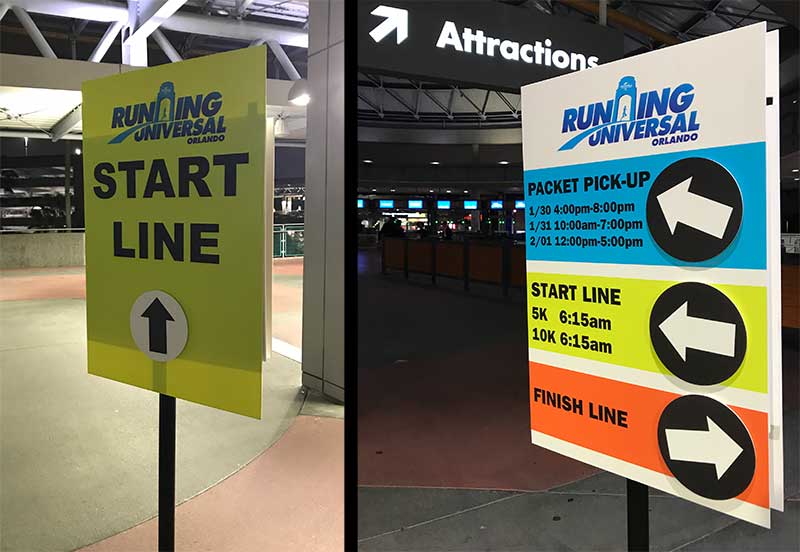 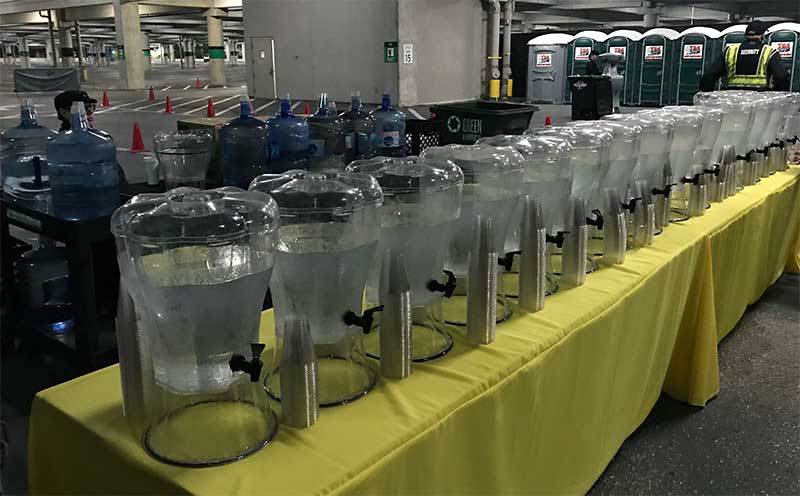 We stood under a parking kiosk roof to stay dry for as long as we could, but team members pushed us forward and we ended up getting pretty wet in steady light rain as we waited for the race to start.

I was assigned to Corral A but I stayed with Arthur, who didn't have a corral. We were sent to C because B was already filled up by the time we arrived.

Mile 1: 13:49
We jogged, we ran, we walked, we leap-frogged. I didn't notice any characters out at all for this first mile, which took us from the Volcano Bay bus depot and then along Universal Boulevard and Hollywood Way towards Islands of Adventure. 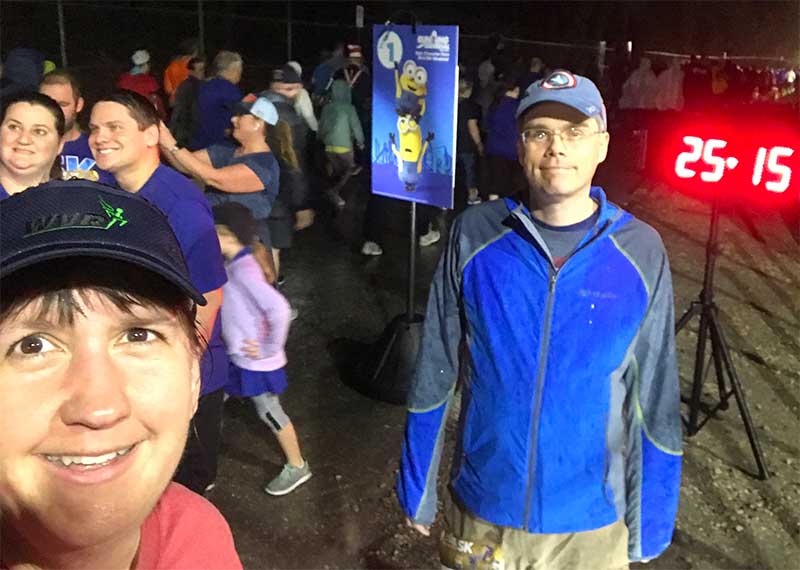 Mile 2: 21:22
This mile took us through Toon Lagoon, Super Hero Island, and Seuss Landing in Islands of Adventure. We ran backstage along the Hogwarts Express train line towards Universal Studios park. Here we saw our first characters out on the course. Betty Boop and Popeye with Olive Oyl were out in Toon Lagoon. We also passed by Puss in Boots and stopped for a photo with some Spring Whos (Whoville characters). All of the characters were under cover because of the rain, although it had cleared up shortly after we started running. 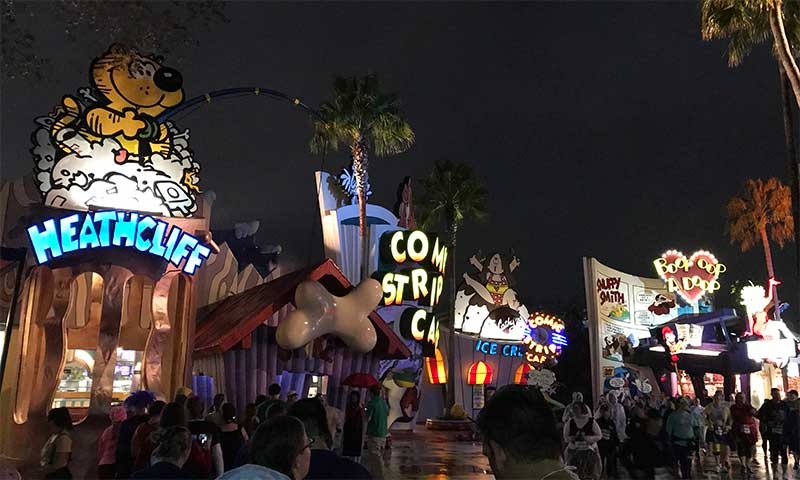 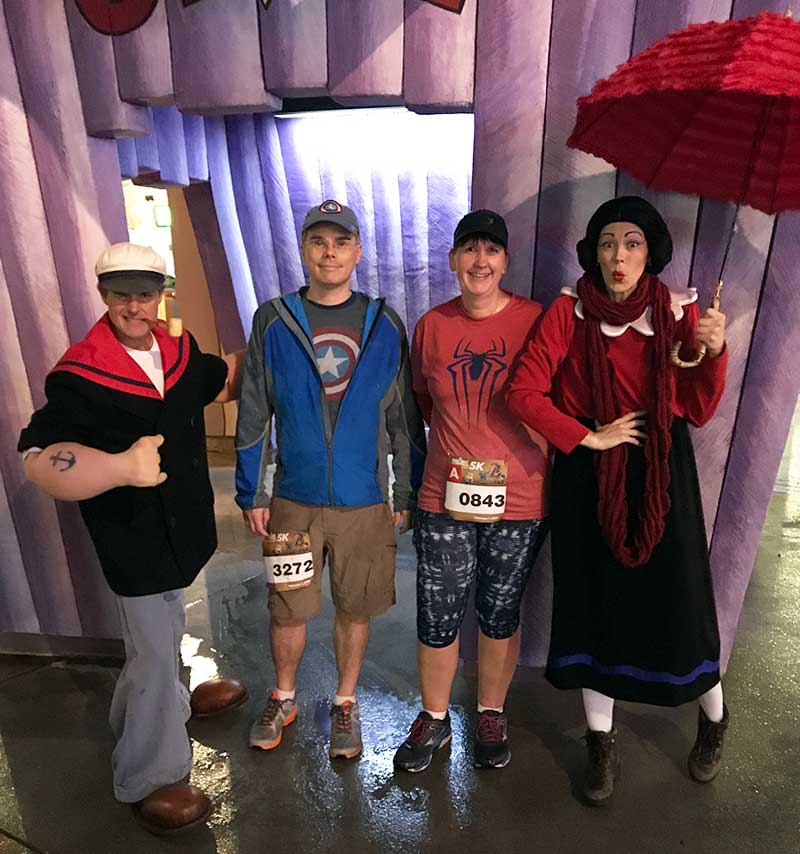 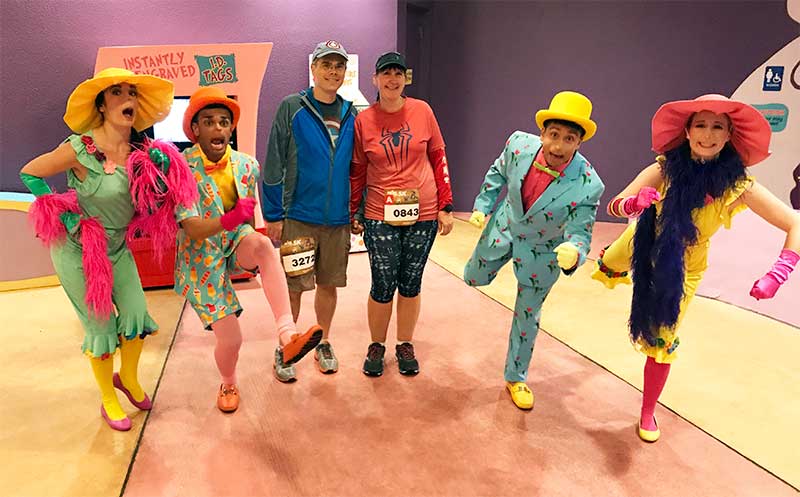 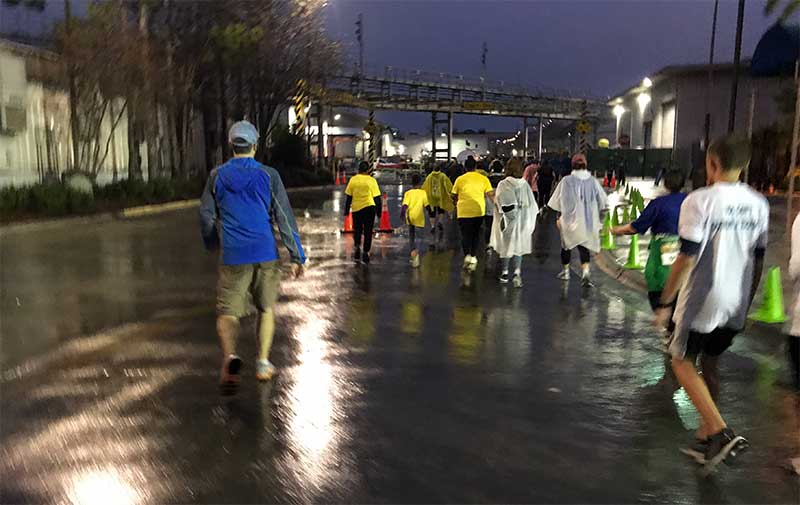 The last mile took us through much of Universal Studios Park. We passed the Knight Bus from Harry Potter, with a driver and the funny animated Dre Head. Krusty and Sideshow Bob were out in Springfield. We passed by some Mardi Gras characters under the Horror Make Up Show marquee. Bumblebee and Optimus Prime were out in front of their attraction building. 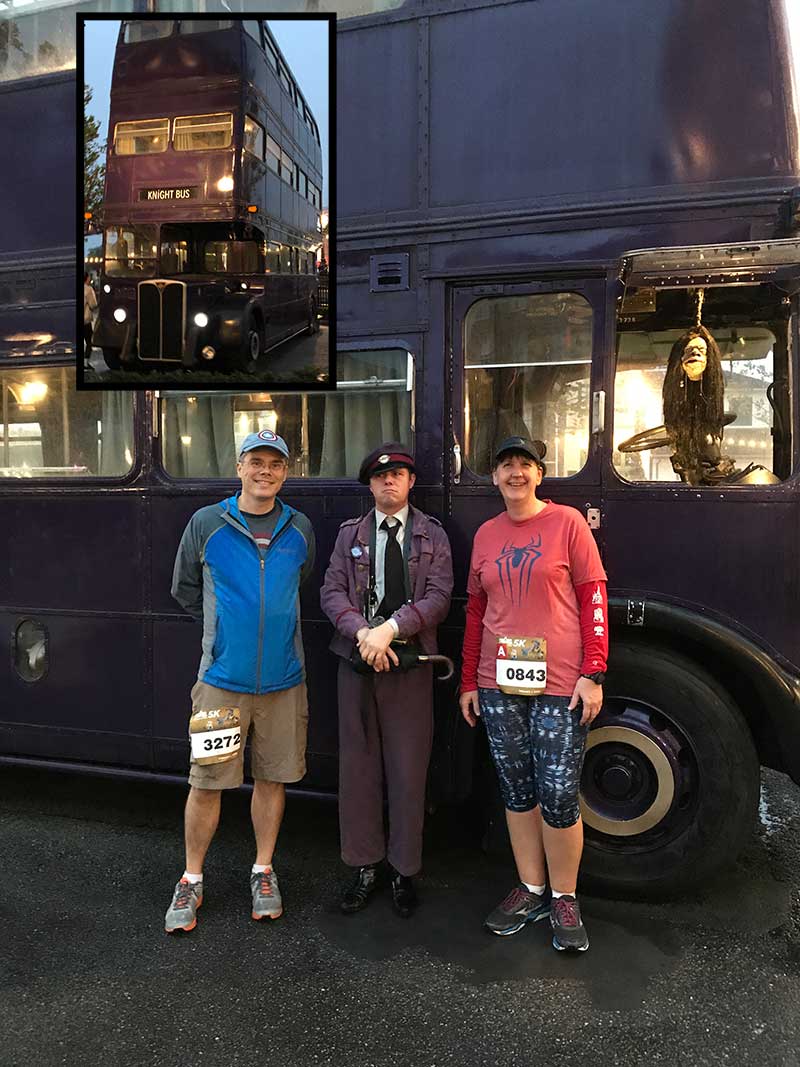 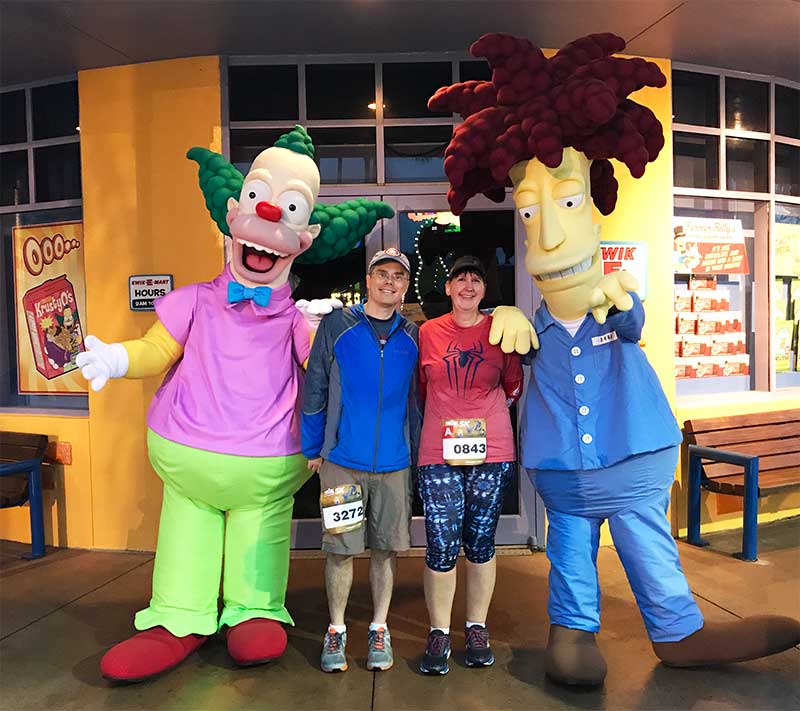 While we were in line for Krusty and Bob we saw Tim Tracker (Disney / Orlando / new parent YouTuber) walk by. After we got our character photos, we ran on to try and catch up with Tim, to say hello and let him know we are fans of his channel. I asked if we could take a quick selfie. You can find his video report of the race here: Tim Tracker at Universal Orlando's First Ever Running Universal Epic Character 5K. You can see us taking our photo with the Summer Whos at around 5:33 and you can see making a fool of myself at around 10:00. 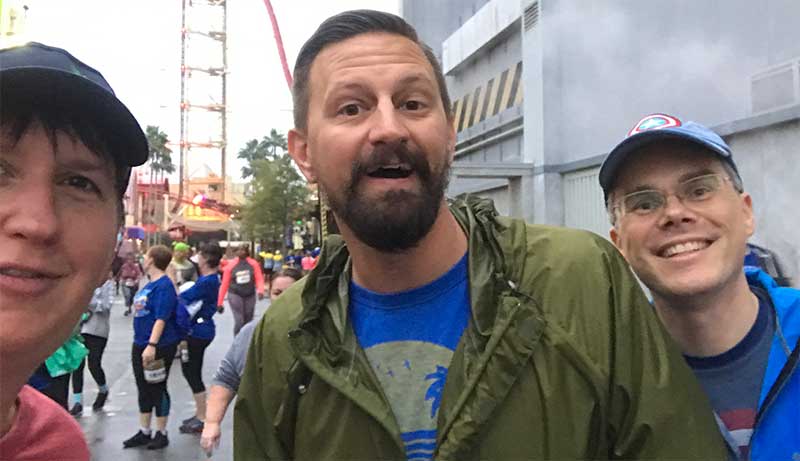 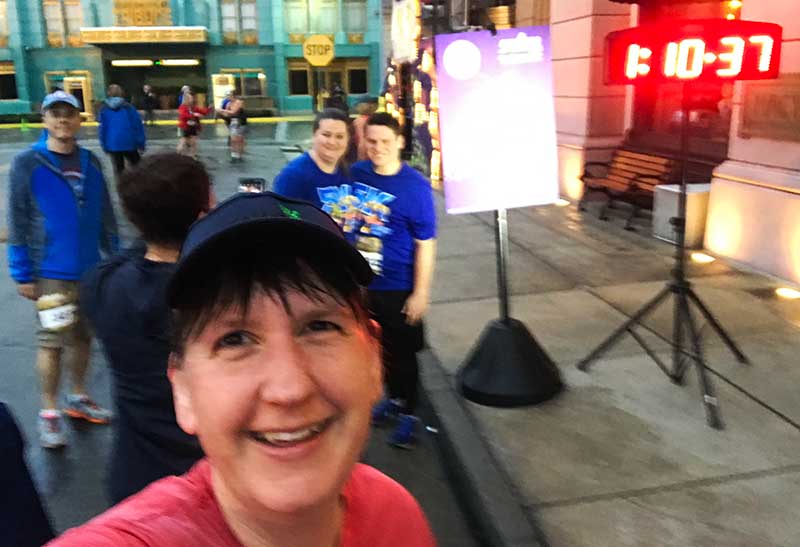 Moving on, we stood in a short line to meet the Blues Brothers. Unfortunately they took a break as we reached the front of the line and we decided to keep moving rather than wait any longer. Shrek and Donkey were out for photos as well, but somehow we completely missed them.

After the Race
After we passed the finish line, Alex from Madagascar was available for photos. We skipped the line and picked up our water, bananas, and Running Universal snack boxes. It was starting to drizzle again so we didn't stay long. The walk back from the finish line took us backstage to City Walk near Blue Man Group. We were back to the car pretty fast and decided to head home because of the lousy weather. 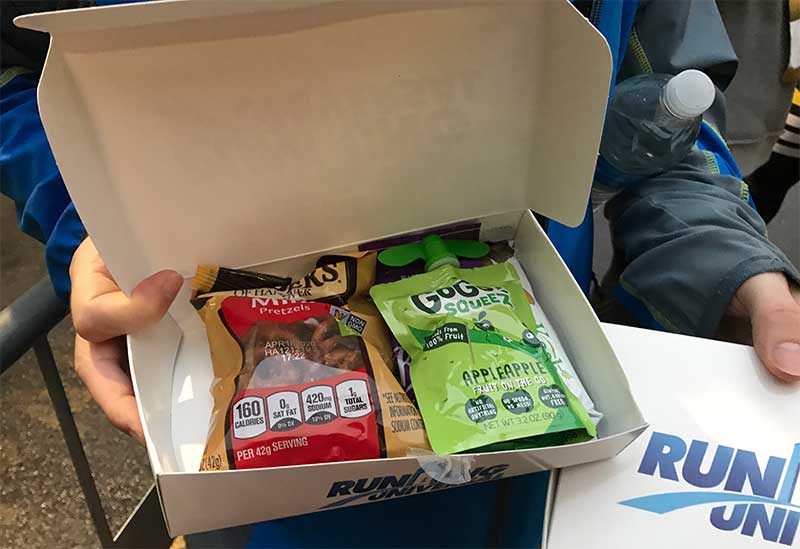 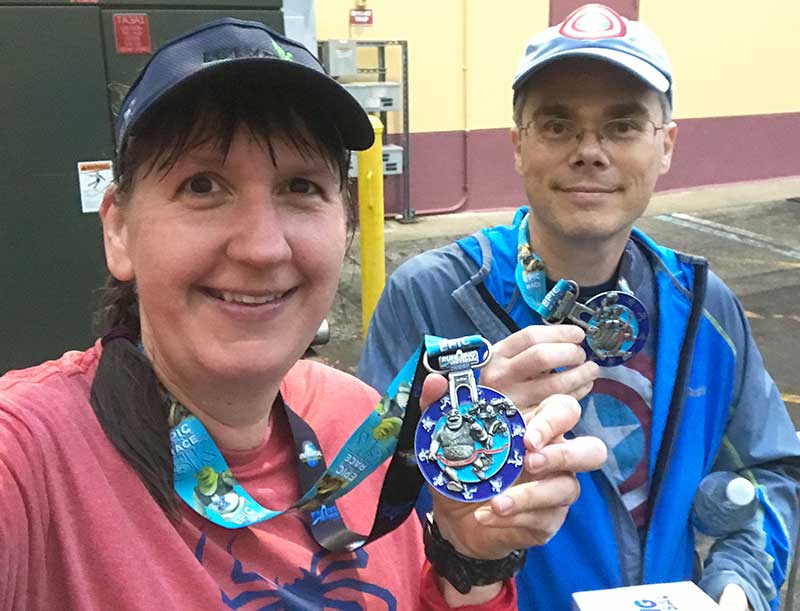 Room for Improvement
I enjoyed both races but I had a few problems here and there. I thought I'd keep the negativity in this one section.

Arthur and I had some small issues during packet pickup, which we did on Thursday before race weekend. I read the entire online FAQ before we left home. When we arrived at the parking kiosk, the attendant asked for our parking voucher. I actually thought she was kidding at first, because I read nothing about a voucher in the FAQ. It should have been sent to us via email. I didn't get it. Arthur checked his email and found it, but showing the voucher on the phone was not acceptable; it had to be printed out. We were told that we would have to pay for parking or leave.

My 5K bib had a corral sticker on it. My 10K did not. I asked about this and was told to go to runner relations to get a corral assignment for the 10K. There were two women with laptops at a table outside. I asked about the corral assignment and they asked if I had proof of time to show them. I needed to pull up something on my phone. I said I registered for both races together in one transaction and that I had put my proof of time in the registration. I asked if they could pull up my registration but they could not. I flustered, stood to the side and tried to think of what race I might have used for proof of time. Then one of the ladies said she could figure it out and she started staring at an email which gave the time standards for corral placement. She said it would take her a minute to figure it out but after a couple of minutes she seemed flustered herself and just got out a sticker to put on my bib, rolling her eyes and making me feel like she thought I was trying to do something wrong and she just wanted to get rid of me. Only later did I realize that in the printout I had with me was the proof of time I had entered in my original registration.

Recommendation
Although we didn't have a good time during packet pickup, the 5K race (and the 10K as well) was a lot of fun.

I enjoyed the course, which was partially through the parks and partially backstage. There was a fine amount of photo opportunities, especially considering the weather. The course was well-marked and there were plenty of water stops. The start and finish locations were very convenient to the parking lot.

The race shirts are kind of cheap, made of heavy wicking material with a thick print, and only available in unisex cut. The bibs are oddly printed off-center and not special, though they are custom. The medals are nice spinners. 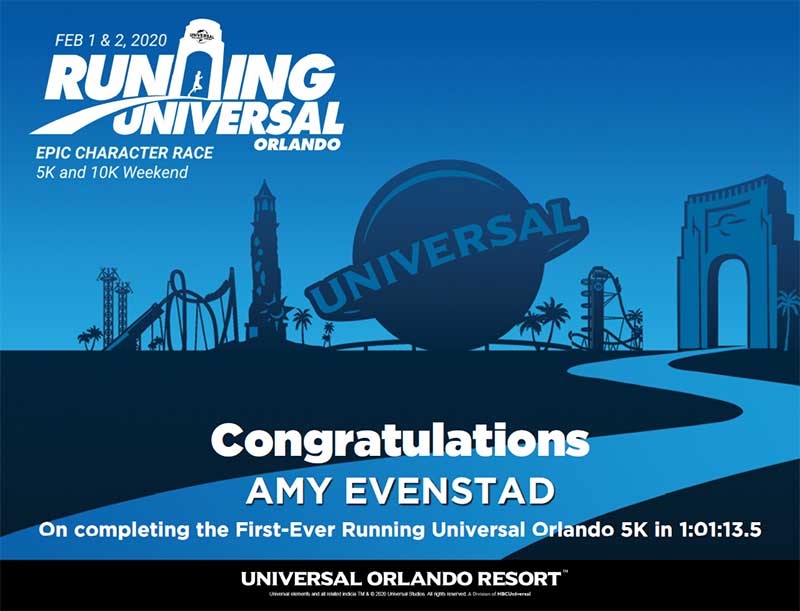 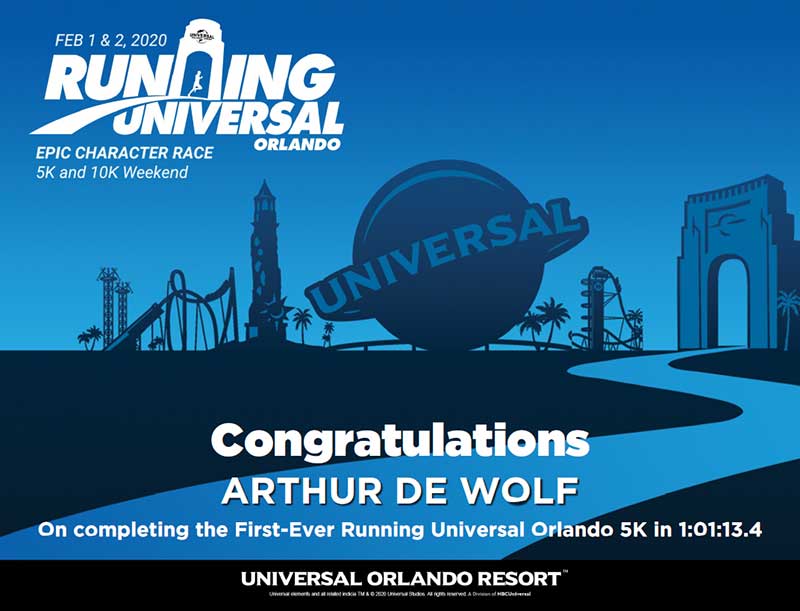 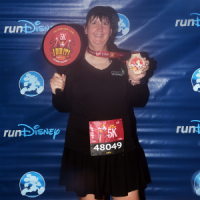 The 2021 Wine and Dine 5K, part of Disney's Wine and Dine Half Marathon Weekend, marked the return to in-person racing events at the resort. The last run at Disney World before the pandemic started was the 2020 Princess Half Marathon, held back in February 2020. This race... 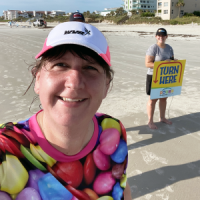 The Flagler Avenue Business Association puts on a series of beach 5K races in New Smyrna Beach, Florida, each year. I participated in their July event, the Ice Cream Beach 5K, for the first time this year. The race is an out-and-back run on the hard-packed sand of NSB. 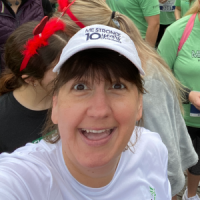