There was a lot wrong with this race. Here's a Runner's World article about the Weeki Wachee Mermaid Race, under their "watchdog" series.

I had signed up for the Big Splash Challenge, which meant I would participate in the Weeki Wachee Springs Mermaid Race Half Marathon, 5K, and One Mile Dash. This would give me an additional challenge medal. Signing up was easy. Most of the rest was a straight up disaster, from packet pickup to race day to the aftermath.

Early Signs of Mismanagement
Pre-race information emails changed details, like the availability of race day packet pickup (not available to available) and the start times for all of the races.

Packet pickup at Disney Springs two days prior to the race took way too long. When I was there the line was almost out the door and moved very slowly. There were two people helping runners and my own pickup was quick and easy so I have no idea what the problem was for everyone else.

I heard from others running the race (members of my running club) that packet pickup on site the day prior to the race was a complete mess, taking 2 hours or more for some runners, with only one person to serve everyone.

Training & Goals
Dopey training had begun and my plan called for a long run this weekend. Back-to-back runs are also in the mix, and with the Global Energy 10K the following day, the Big Splash mileage would make for some good training. The idea was to just go out and have fun and not worry about my finish times.

Race Day: September 23, 2017 | Screw-Ups & Dangers
Pre-race emailed information told runners we could start as early as 6AM, with waves of runners being set off at 15 minute intervals. This was great news, especially for Big Splash runners, as we were initially told the Half Marathon would start at 7AM.

I had to leave home around 3:30AM to arrive in time. I was there just before 6AM and figured after a stop at the restroom I could start in the second wave. But no one was running yet. The crowd of runners increased... and increased... and increased. Time passed. More time passed. Pretty much everyone started grumbling, and there was no information coming from race staff or volunteers. The sun came up. At around 7AM we were told we would be starting in about 15 minutes. More grumbling. We didn't start until 7:30AM. By then it was 73°F with 94% humidity.

The course was on sidewalks along a major highway. The grass around the sidewalk had been recently mowed, leaving major debris (some still from Hurricane Irma) and piles of grass, leaves, and weeds all along the way. Some runners took to run along the side of the highway. I did this for a while but it seemed more unsafe than dodging the debris on the sidewalk so I went back. I saw a lot of runners with burrs on their socks and shoes. I got a couple of really painful ones that were difficult to remove.

There were no cups, no staff or volunteers at the first water stop. There was a cooler of water, but runners like me who were not carrying their own bottles could only try to drink from the cooler or skip the stop. I ran on... 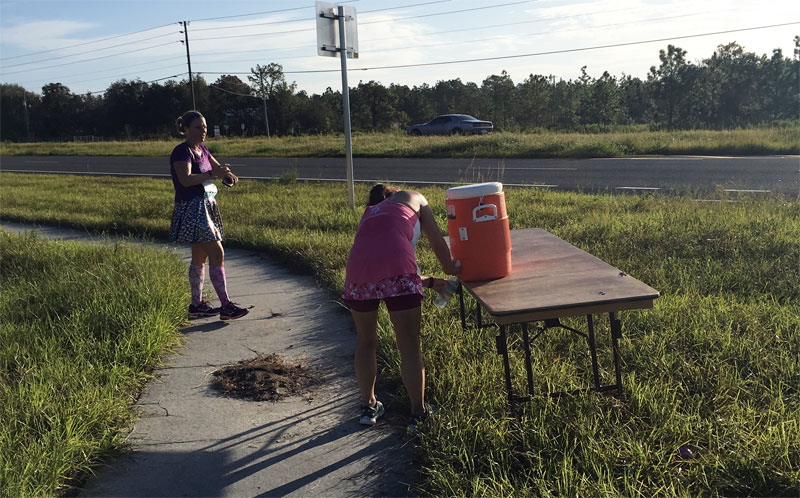 No cups, no staff or volunteers at the second water stop. I should have turned around here. But I pressed on.

No cups, apologetic volunteers at the third water stop. I tried to drink from the cooler and just spilled water all over myself. From this point I really should have turned around, but instead trugged on, abandoning any hope for a decent finishing time. I pretty much walked the rest.

At the turn-around (mile 6... hmm) volunteers were giving out bottles of water (see featured photo). There were either bottles or coolers at the following water stops. I kept my plastic bottle so I could refill it.

Mile markers were sporadic during the race, but at least the mileage was consistent with my watch up until mile 9. My GPS gave me about 7.5 at that time and from there the markers were off. I finished at about 12.5 miles according to my Garmin (a half marathon is 13.1 miles).

There were several major highway crossings, which were known. However, these were unmanned and unstaffed. Usually a race will have police officers or other officials to help runners safely cross roads (any road! let alone major highways).

I am probably forgetting stuff... but all that was just about the Half Marathon.

Big Splash runners had to exchange bibs for each of the subsequent races. It was a little annoying to have to stand in line, but whatever, okay. Bad news though, our results for the 5K and One Mile Dash never posted, even after I emailed asking what was going on. No acknowledgement whatsoever.

There were no water stops, no mile or distance markers, no directions, no volunteers or course... NOTHING! for the 5K and One Mile Dash. At the first major road crossing by the starting area, a volunteer pointed out where we should go for each of the shorter races, but it seemed like it was just up to us to figure out where to turn around. I did hear afterwards that the 5K course was short and the One Mile Dash course was long, so I guess some runners were able to find course direction.

Aftermath
In a sadly unceremonious fashion, runners picked up their medals after completing the race(s) from a dedicated tent manned by a couple of uninterested staffers, rather than receiving them immediately after each race. The medals were all still bagged.

Recommendation
Are you kidding?! Stay away from Landmark Races at all costs!

I should mention that one great perk for this race was free admission to Weeki Wachee State Park following the event. I took a dip in the spring and watched a mermaid show. I got some ice cream. The park is great and had very little to do with the disastrous race event besides the location.

Also the medals for the races are super cool. I have to give 'em that. Excellent medals.

Lighthouse Loop is an awesome local race that benefits the athletic departments of 10 Volusia County schools. The schools man 10 water stops on the half marathon course and the stop with the best cheer squad wins the most spirited award (and a cash bonus for the...

I ran the 8th annual Daytona Beach Half Marathon on February 5th. It was my first time running this race, which takes participants from the famous International Speedway to the beach and back through the streets of Daytona Beach. The race was available as a two-person relay this...