Arthur and I headed to the expo on Thursday and I picked up my bib and shirt. Everyone participating in the Half Marathon also got a cute luggage tag shaped like the finisher's medal as an extra perk for the 20th running. I purchased my usual commemorative race Mickey ears car magnet, and then we picked up some freebies (obligatory Good Sense pain relief, obligatory Chiquita banana, obligatory GoGo squeeZ applesauce, cowbell, and Cigna race belts) and extra running fuel in the expo hall. I even got an airbrush tattoo! 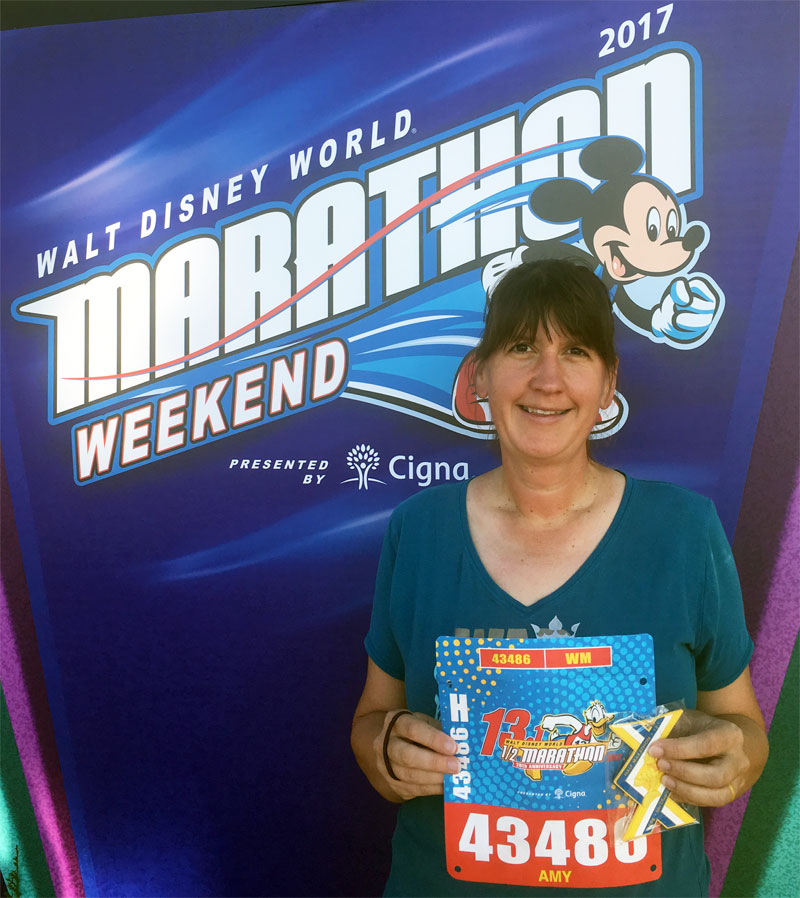 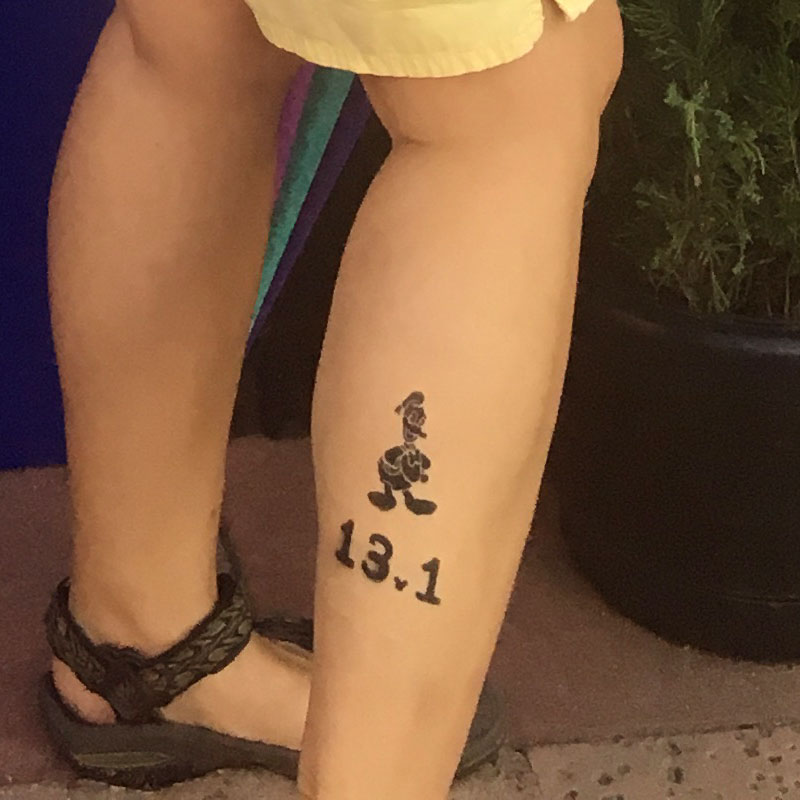 The forecast for Saturday looked bad all week. A front was moving in and the timing couldn't have been worse. By 7:30PM Friday night runDisney got the word out that all of Saturday's race events, including the Half Marathon, were cancelled, because of the chance of severe weather.

Everyone registered for the race would receive the medal along with a form of compensation. Those running in the weekend's challenges would also be eligible for their medals (Goofy for doing the Half and Full; Dopey for doing all four races). Even Coast-to-Coast runners would be able to get those medals upon completion of their eligible Disneyland race. In my opinion Disney made the right call in cancelling the race for runner, staff, and volunteer safety. They were also very generous in offering compensation options. I took a refund in the form of a Disney gift card; others took a deferrment, or park hopper tickets. At least 250 runners took the opportunity to run in the full marathon -- totally badass! (Arthur and I spectated during the full marathon on Sunday and I was especially enthusiastic when cheering on the Half Marathon runners).

As soon as it was known that the official race was cancelled, Disney runners on social media started organizing virtual runs. Many wanted to earn the medal by running miles on Disney property. Goofy and Dopey runners wanted the full challenge experience. I was super bummed when the official race was cancelled, but reading about all of the planned runs taking place around WDW property got me pretty excited. I decided to run 13.1 miles on Saturday, after the storms passed, along with many others around the Boardwalk area and between Epcot and Hollywood Studios.

Arthur dropped me off at Hollywood Studios at about 10:30AM. I was wearing my race bib but I elected to wear regular running clothes rather than my planned costume. Immediately I saw runners getting in their miles -- some in costume, many with race bibs, and every single one with a welcoming smile. Right from the start the atmosphere was phenomenal.

My plan was to get in my miles between Hollywood Studios and Epcot (using the public restrooms outside of Epcot as a water stop), running around Bay Lake and the area. 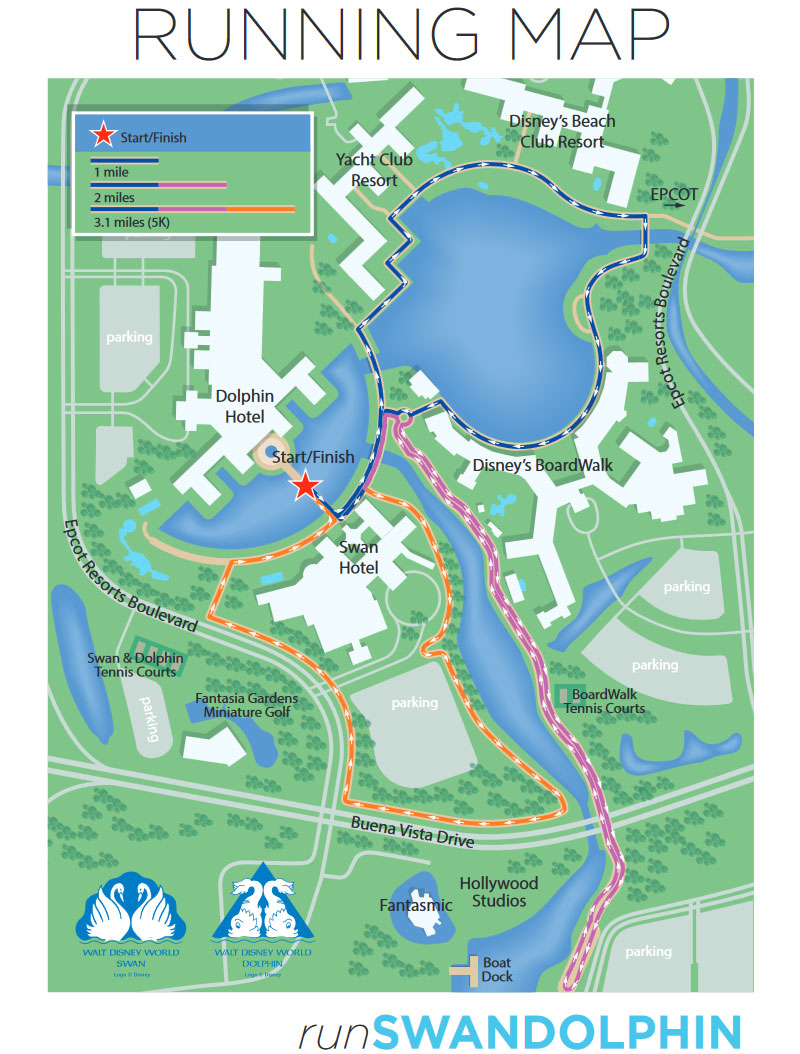 Miles 1-3
In very light rain I ran from Hollywood Studios to Epcot and back, taking the north side of the Boardwalk area both times and hitting up the lighthouse path for extra yards. There were cheering spectators between the two parks and along the Boardwalk, and they were awesome. 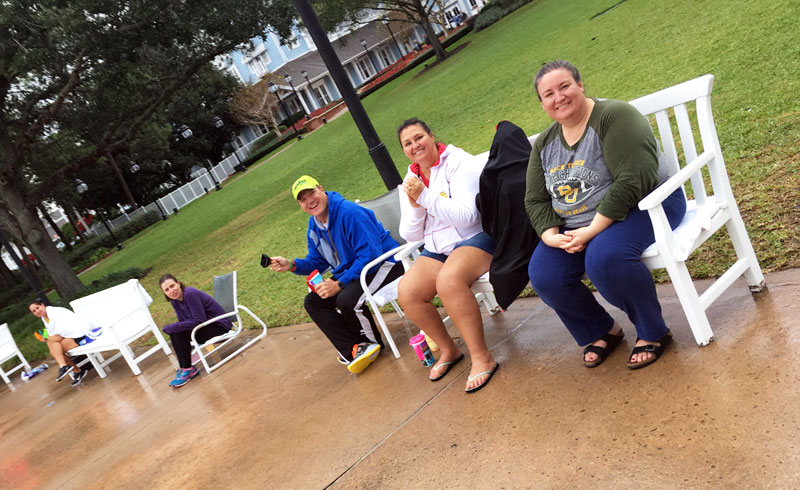 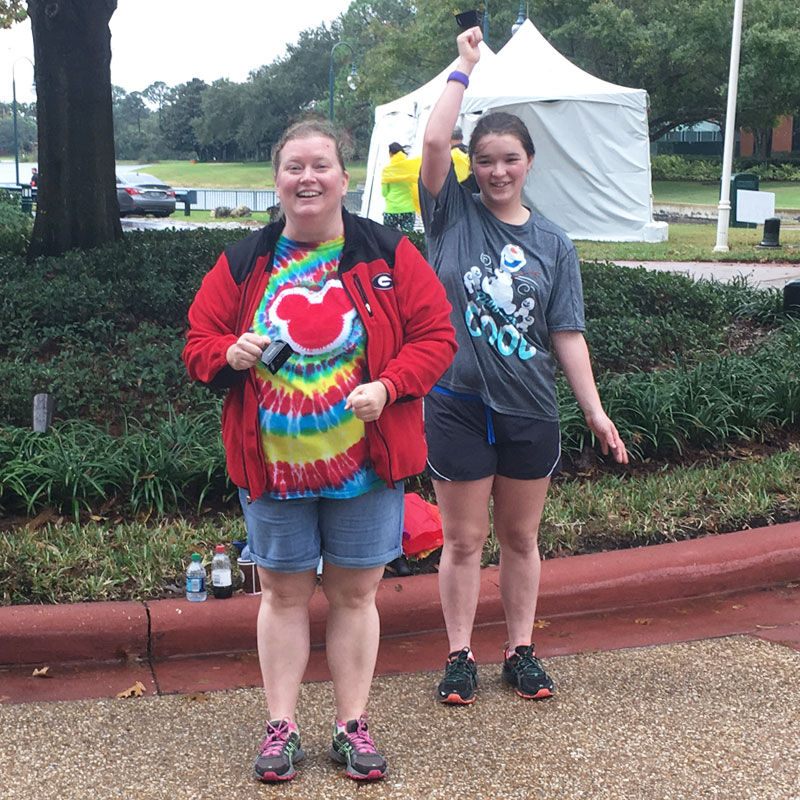 I did run/walk intervals for the entire run and from the start I raised my arm to indicate walk breaks, as is standard (Disney) race etiquette. Several times I got chuckles from other runners -- indicating a walk break in such a relatively sparsely populated course was pretty funny.

Miles 4-6
I headed back out around the Boardwalk parking lot for some variety, and took the steps down from the resort back to Bay Lake. I was surprised to find Arthur when I made it back to the loop. We walked together to the entrance of Epcot where we parted ways until the end of my miles. I ran back to Hollywood Studios again and continued with my irregular loops. 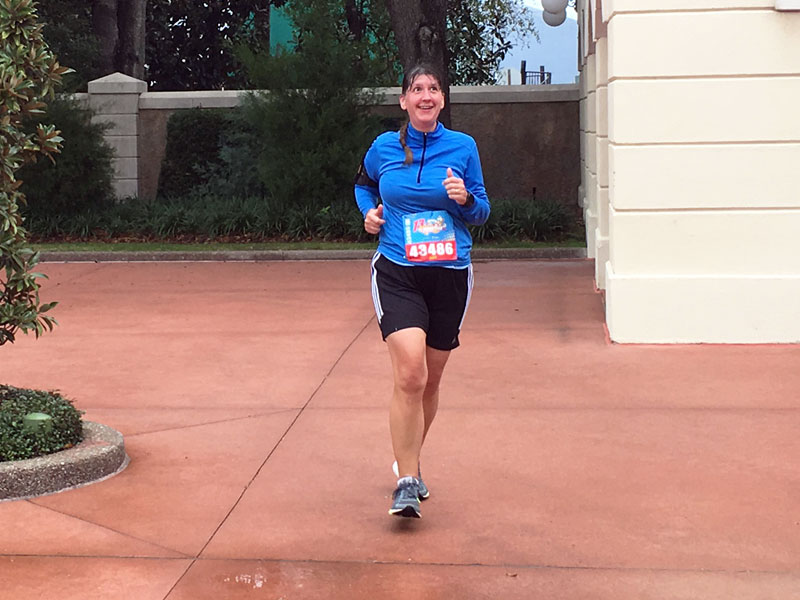 We Disney runners were missing our race photo ops, so we made our own. I took a couple of selfies by items of "interest" during the run, including a sign indicating mile marker 24 for the full marathon. 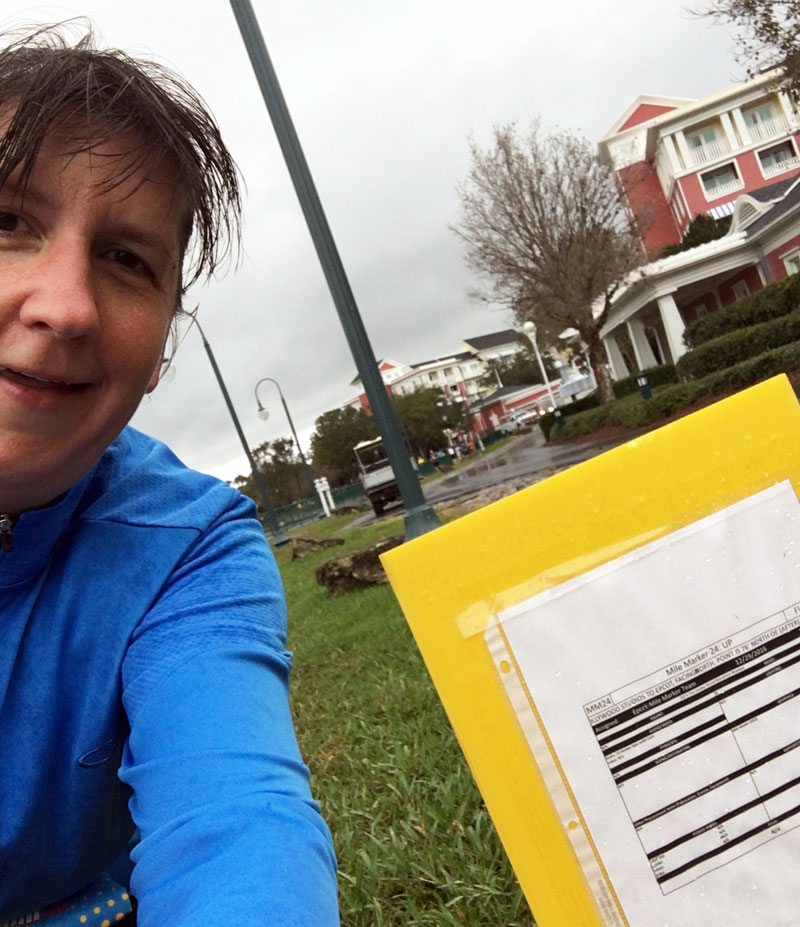 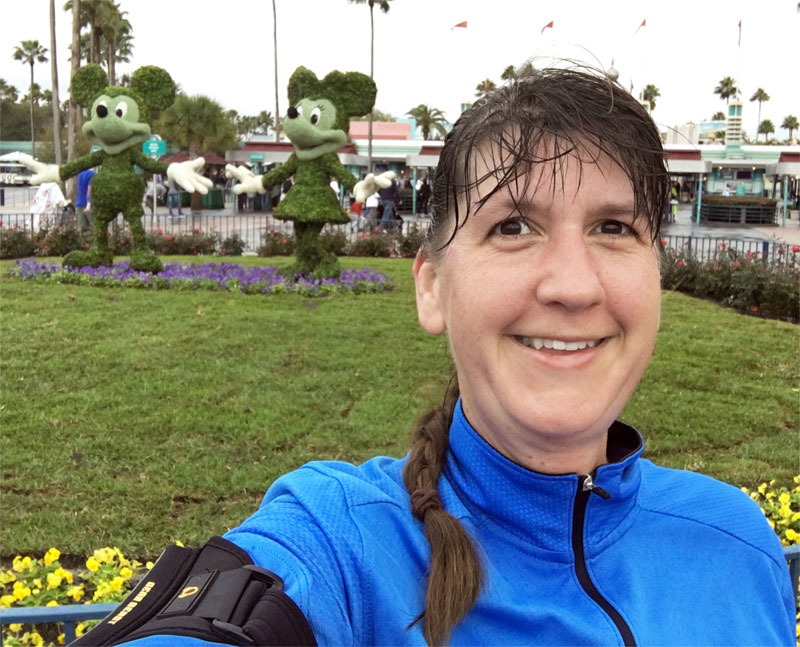 Miles 7-9
I took another different turn at mile 7 for some variety. I ran around the Swan's parking lot and back again along Swan property to the Boardwalk and Bay Lake loop. At one point cast members from ESPN Zone were standing outside the club handing out water to us runners. Someone shouted out that they liked my tattoo and I didn't realize they were talking to me until a few minutes later. During this segment it started raining harder. 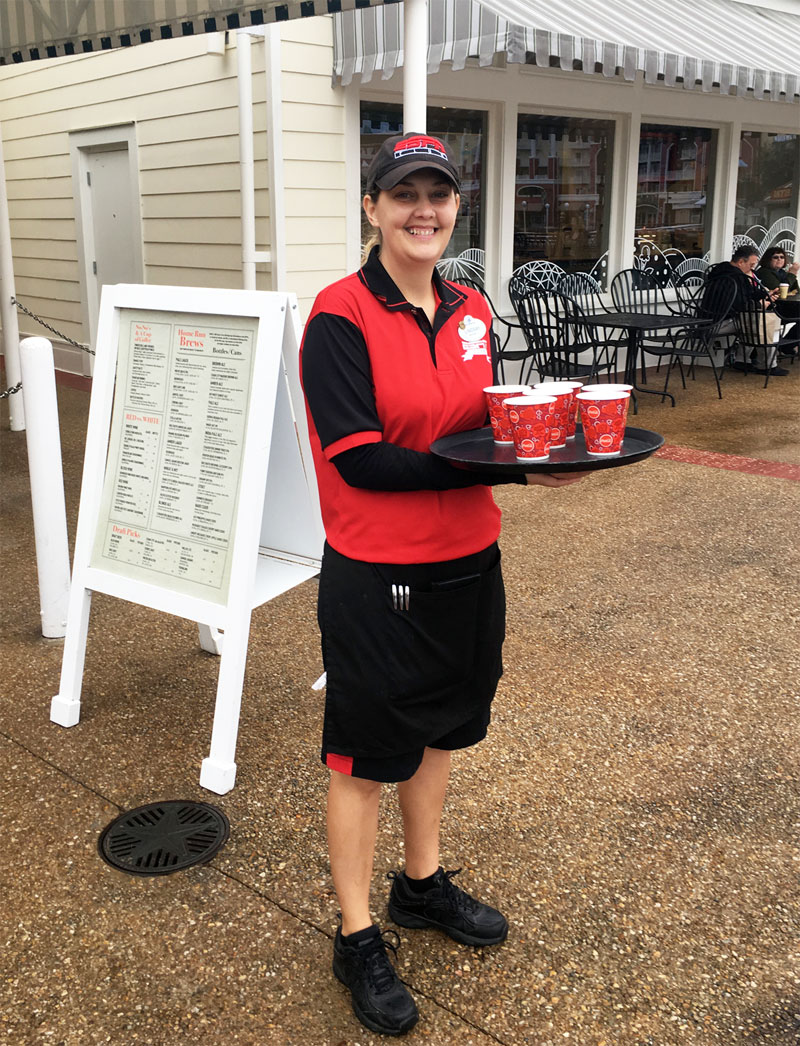 Miles 10-13+
I had decided to finish my miles in Epcot, which meant I'd be walking the last bit. At my 10 mile "turnaround" back at the Hollywood Studios entrance they were playing the theme from Rocky over the loudspeakers, and I heard several runners wondering aloud (as was I) if that was on purpose for us.

A few times as I was nearing the end of my run I came across others who finished their miles and exchanged high fives and motivating cheers as I continued on.

I took the Boardwalk parking lot detour again, and the difference between taking the stairs back at mile 4 versus mile 10 was pretty hilarious. I "ouch"ed my way down and then back to the back entrance at Epcot with exactly 1 mile to go.

Once inside Epcot I met up with Arthur and we proceeded around World Showcase. I had a celebratory beer and then at mile 13.05 we stood in line for a real character so I could get a photo with Pluto. Just a little bit further and I was done! 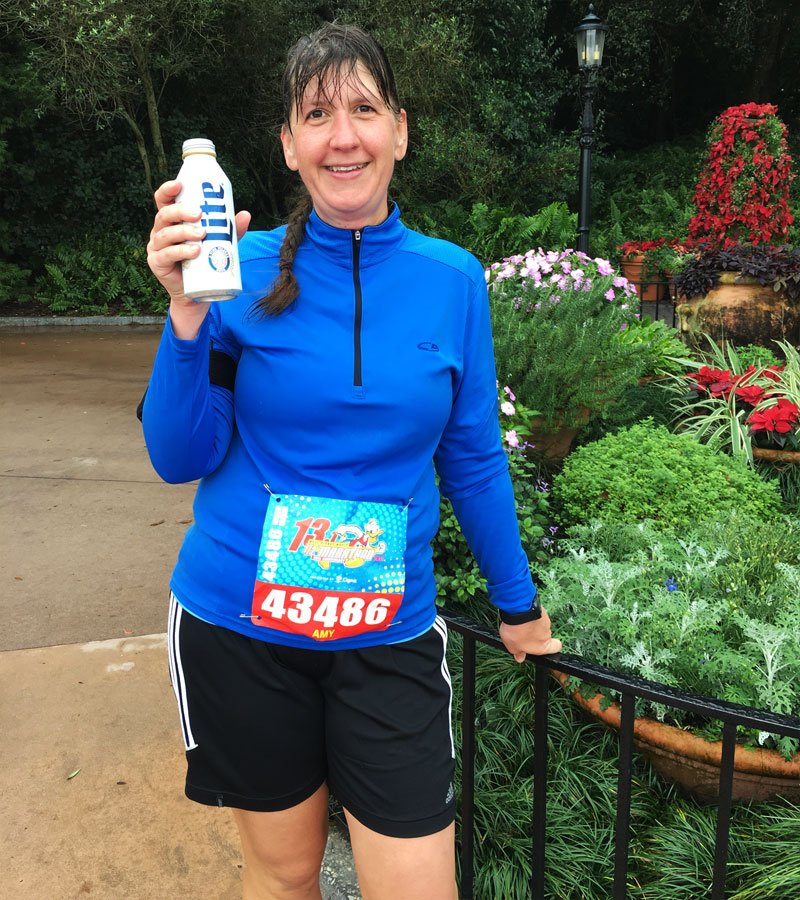 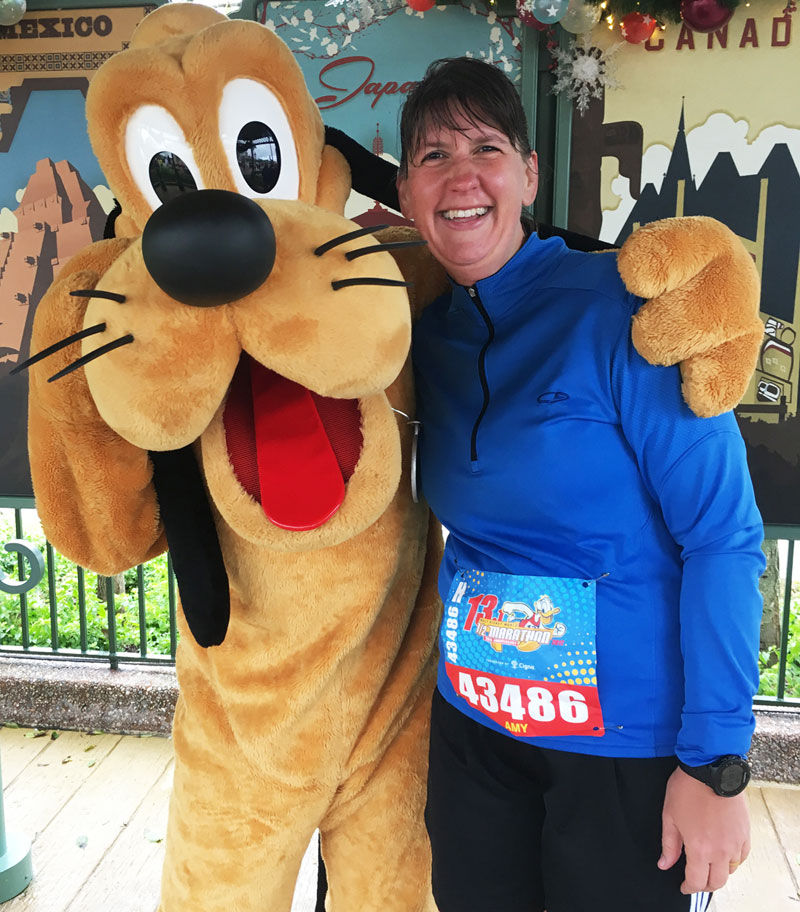 It was no official race but I was happy to take the medal after getting in my virtual miles. Medal pickup was quick and I even took a finisher photo with Donald to commemorate the day. For me this medal will always have an asterisk but it was a great run among fellow runDisney fans! 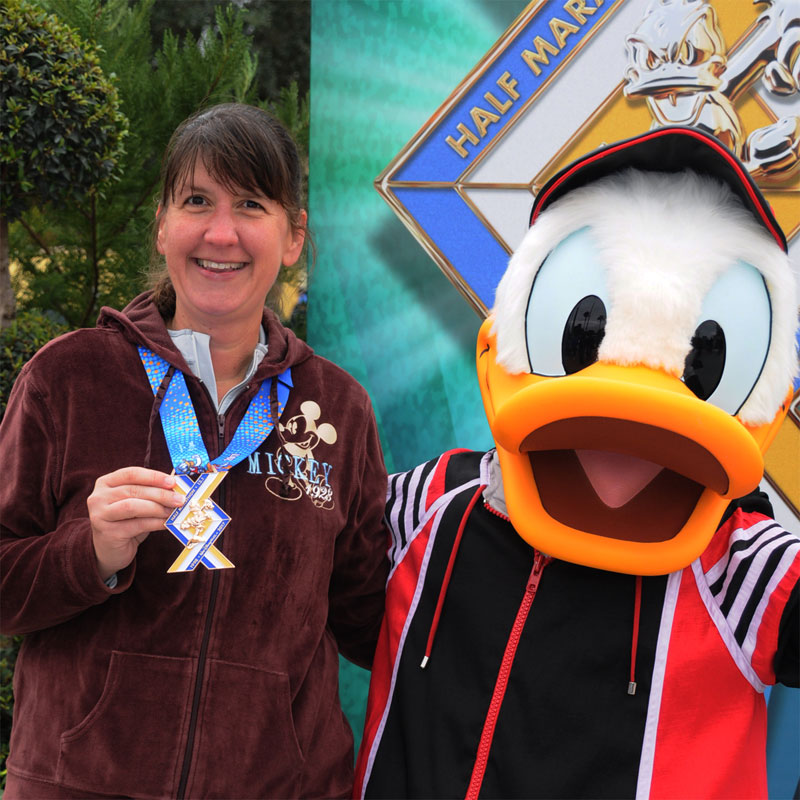 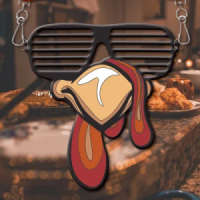 An unresolved nagging injury has kept me from making running goals. I finally got a referral from my primary doctor in mid-September but I've still got to make my appointment. I've put it off long enough that we're... 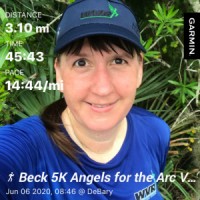 Before the Beck 5K Angels for the Arc race was converted to a virtual event due to the pandemic, it was on my radar as a local-ish race up in Palatka, Florida. The race is put on to support The Arc of Putnam County, a charitable... 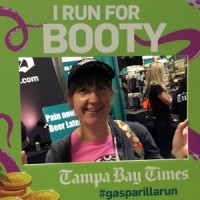