Back in mid-February I signed Arthur and I up for this short race at the St. Augustine Alligator Farm. I had always wanted to visit the farm, mostly because the boardwalk is famous for hosting wading birds. Although the race would take place a bit early in the breeding season, I thought the race plus a visit to the farm and then spending some time in historic St. Augustine would make for a nice Saturday outing the following month. A big bonus: the Raptor Run 5K would benefit the Avian Research Conservation Institute, which studies Swallow-tailed Kites through satellite tracking, among other scientific research projects.

As the race date, March 15, approached, the novel coronavirus was continuing to spread, ramping up in the United States. Social distancing was just starting to be recognized as a necessity in order to stop the spread and many races were being cancelled. I had signed up for two races this weekend, and both ended up taking place, which I thought was unfortunate. I didn't attend either one in person. The Raptor Run 3K kindly agreed to send our packets to us in the mail, so we could complete the race virtually. I know they also offered refunds to some runners.

I haven't been a fan of virtual races but I've got some ideas to try to enjoy them more, since there are more than a few in my future.

Virtual Race Goal
I'm so bad at making goals, but I thought maybe I could try to set goals for virtual races to make them more meaningful somehow. I decided to make a goal of sub 25 minutes for this short race of 3K or 1.87 miles. I aimed to run:walk 90:45 for the duration.

Race Day: April 11, 2020
The Raptor Run 3K was organized as a physical race that I opted to do virtually after the fact. The physical race took place on March 15, 2020. April 11 was a perfect cool morning for running, with a temperature of 63°F, 68% humidity and clear skies.

Mile 1 (1.6K): 12:21
I ran familiar streets of my neighborhood. I've been avoiding our popular trail system in favor of the more empty residential streets. It's easier to avoid running into people, I'm not getting surprised by passing bikes, and I'm always relatively close to home.

I know it's not good to pace-shame oneself but I've been quite bummed about being so slow lately. It felt good to push it a little bit this morning.

Swag
For this race I received an extremely comfortable cotton unisex t-shirt and a custom medal.

Recommendation
I was very grateful for the race director to offer to send our packets to us in the mail. I certainly hope to run this race on location in the future. 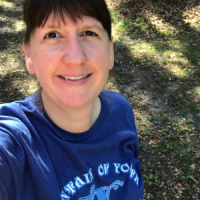 Central Florida Legends is a new race event put on by my running club, West Volusia Runners. Races include the Skunk Ape Marathon, Mermaid Half Marathon, and Fountain of Youth 5K. Arthur and I volunteered for this inaugural event back on November 24, 2019. I was... 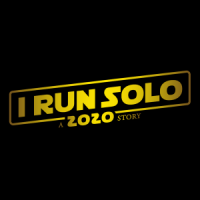 I'm trying to complete a 5K a day runstreak (or walkstreak) this month. My aim is to have each 5K (or longer) be some kind of "event", from free online challenges to organized virtual races plus a few DIY runs. I posted about the... 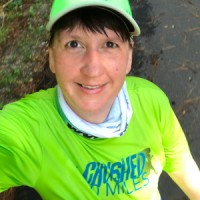 A local race company, Red Pointer Productions, put on a very popular and successful virtual challenge for the month of May - the Miles de Mayo Challenge. I participated in this, making the 100 mile tier. For the last day of May they offered a virtual...