The Turtle Krawl 5K claims to be the largest 5K in Brevard County Florida. The race takes place on a barrier island, in coastal Indialantic, and runs through residential streets as well as along a seaside roadway. Proceeds from the race benefit the Sea Turtle Preservation Society.

Training & Goals
I really like the cause this race supports so that was my primary reason for running. Swag included a sweet turtle tech shirt and awesome optional medal which also made me want to run this one. My only goal was to have a good tempo run as part of my ongoing half marathon training.

Race Day: September 10, 2016
So Indialantic is pretty far from home, which meant I had to leave home pretty early to arrive in time. I was on the road by about 4:45 and the drive in was smooth. I arrived in time to park along the main beach drag, run to packet pickup (which was incredibly well-organized and fast), run back to the car, and then run back to the starting area. The race used chip-timing in a D-Tag that was attached to the back of the bib and had to be transferred to our shoes. Interesting method! 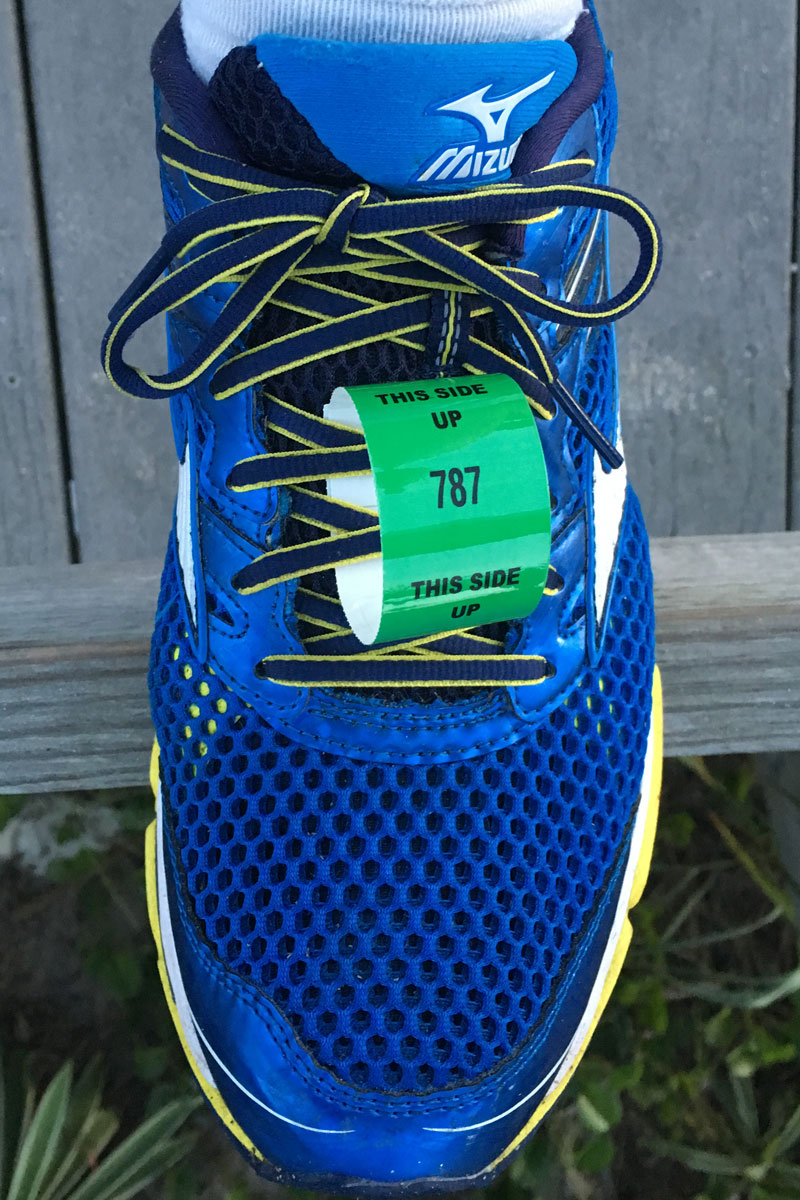 The temperature at the start of the race was a balmy 77° with a stifling 94% humidity. I had thought a seaside race would provide a nice ocean breeze. Instead this felt like the hottest race of the year so far and it ended up hitting me hard in the last mile.

Mile 1: 9:55
I lined up around the 10 minute mile pace sign. In other races I have had to bob and weave a lot at the start, but the lineup for this very large race was almost perfect and I could run at pace from almost the start. Everyone lined up as they should and it was great. I felt really good during this first mile and didn't stop for any walking.

Mile 2: 10:19
There were several groups of volunteers out on the course with professional-looking spectator signs that were fun to see and helped motivate us runners. "You run better than Congress", "If you fall down, I'll stop your Garmin", "Worst Parade Ever", etc. I took one small walking break during this mile but I started feeling bad about halfway through.

Mile 3+: 13:11, 3:14*
Yikes, somewhere in this mile I suddenly started feeling extremely fatigued and had to slow down. I took a lot of walking breaks and ended up walking almost the entire last half mile. I did manage to pick up my feet to "finish strong" -- at least I ran over the line. It was a disappointing finish. 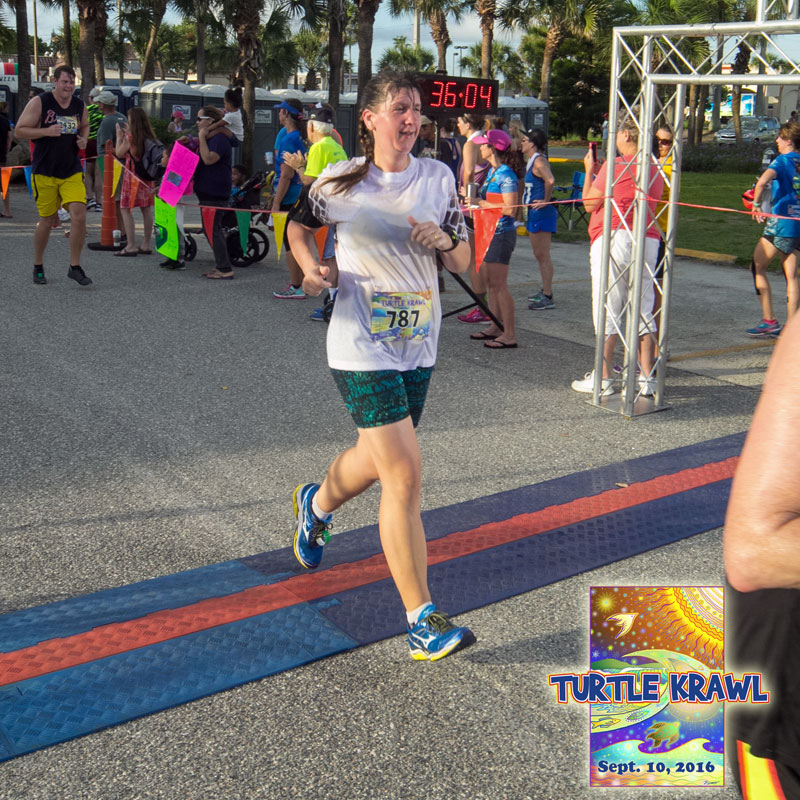 After the race I took one of the provided ice-cold cooling towels (oh so nice) and sat down with a bottle of water and a half banana. I overheard other runners complaining about the heat and being disappointed with their own slow times. After eating and resting I felt much better. The post-race amenities included a huge spread of muffins of all types, all neatly labeled with flavor and allergy information (vegan, gluten-free, nut-free, etc). A few vendors were there giving away swag like sunglasses and water bottles. Later in the morning there was going to be a public sea turtle release. 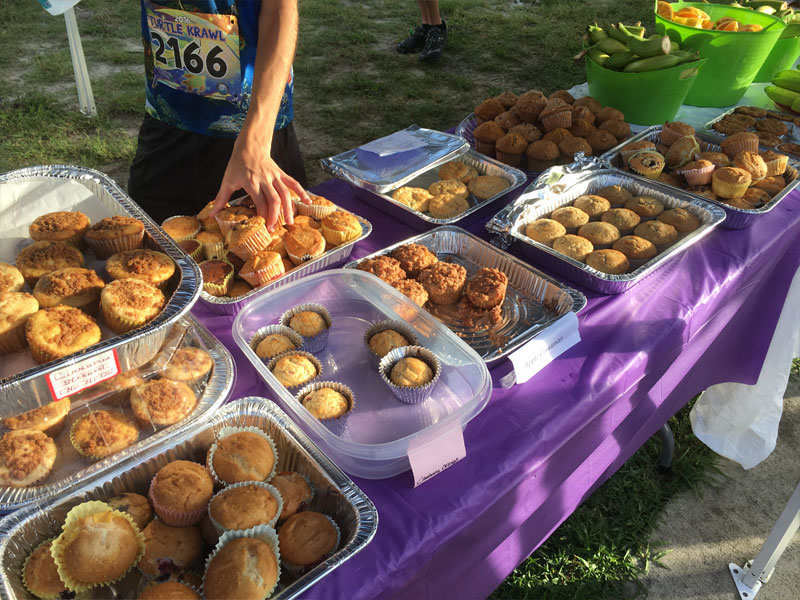 I'm not surprised this is the largest 5K in Brevard County. It was very well organized and supports a great cause. I'm not sure I'll run this one again just because of the distance from home, but otherwise I would recommend this race to other runners for sure.

Chip time: 35:27
Placement details: 47th of 156 in Age Group, 730 out of 2255 total finishers
Race Amenities: Swag included an awesome tech shirt, and a cool (optional) finisher medal. Cold washcloths at the end. A huge spread of fruit and muffins at the finish line.
Cost: $45.00 including $15 for optional medal 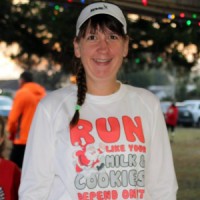 I first ran the Lake Helen Holiday Stress Buster in 2016. In 2017 it was my only holiday-themed race. Training & Goals The Dopey Challenge of four back-to-back races would start the following Thursday. For this race I was looking to have fun and remain uninjured... 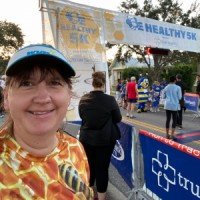 I ran the inaugural Be Healthy 5K charity race for a local non-profit community health center on Saturday, September 24th. The race was put on by Track Shack and took place in Sanford, following a familiar route from Fort Mellon Park, along the beautiful lakefront, and through downtown Sanford. 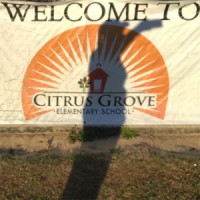 This was the second time I participated in this local race that benefits Citrus Grove Elementary School in Deland, Florida. When I ran Groovin' at the Grove in 2016 it was free because it was on my birthday. Training & GoalsI'm still slowly easing... 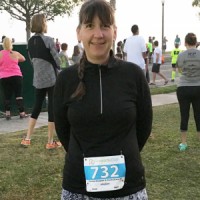 I was suffering from a lame case of FOMO (Fear Of Missing Out) and ended up registering for this race rather late. Race reps were at the vendor area for Swamp House and since then I had been coveting the nice race shirt. A late, unexpected promo...