I ran the Global Energy 10K in 2016, the first time it was held in Orlando. Then as now I used it as part of back-to-back training runs, preparing for a runDisney race challenge.

Following the Mermaid fiasco the previous day, the slick and professional managment of this race stood out more than I might normally notice.

Training & Goals
I treated this like a training run as part of my ongoing Dopey training plan, which calls for some back-to-back runs. My only goal was to finish healthy and hopefully score some free bagels like I did last year.

Race Day: September 24, 2017
I drove to Festival Park in Orlando for the race. Parking and packet pickup were both a breeze (just like last year) and I was ready to run with plenty of time to spare.

The staging area had a DJ and a couple of MCs kept the crowd informed and entertained as we waited to start.

It was 77° with 89% humidity at the start of the race (2 degrees cooler with the same humidity as last year!).

I didn't take any photos during the race or before or after, so here's a nifty video of the route from Relive.

Mile 5: 13:14
I felt okay but slowed my pace when I started feeling overheated. I've been struggling with my runs a bit since we returned from our summer holiday. I've also been super paranoid about overdoing it and unnecessarily stressing my body during training. So... slow down and don't push it.

Mile 6+: 13:48, 8:50*
Even though I'm trying not to stress out about stuff, I was still kind of disappointed with my slow time. At least I was feeling fine when it was over.

After Party
There were plenty of treats for runners after the event. Water, bananas, and oranges were given out in the finish line chute. We also got a drawstring backpack, small sport towel, and arm band. Around the "runner village" there were stands giving out treats, including sleeves of bagels (score!). All bibs had a food voucher attached that we runners could exchange for a grilled cheese sandwich (I passed on this).

Recommendation
It's a well-organized event with a nice 10K route, above-par swag, and an extremely affordable price. Highly recommended. I'll run this again as long as I don't have any conflicts. 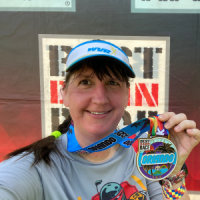 This year I participated in the 2nd annual Moonlight Beach Run event in Daytona Beach. The event offered races of 4 distances: Half Marathon; 15K; 10K; and 5K. Runners could participate in any of the longer races and add the 5K for a bonus challenge medal. All races...