Yay, my first Dark Side 10K! I missed the race last year because of newbie reasons so I was happy to be running it this year, along with the half marathon for the Dark Side Challenge.

For this race I ran as Han Solo. I bought a Han Solo skirt from ThinkGeek.com, and I used a tan tech shirt I already had with a thrift store vest on top. I wore a SparkleSkirt under my Han Solo skirt so I would have pockets a-plenty during the race (I'm hooked on these skirts and hated having to run with an arm holster for my phone and running belt for the 5K).

For Han's holster I cut out pieces of foam sheets and attached them together with paper fasteners that were supposed to look like metal studs. I used cardboard to make a template before cutting the foam. I cut out a blaster shape from black foam and glued it into the holster. I fortified some of the studs with glue as well, and attached the belt together with safety pins that were hidden in the back underneath the vest. 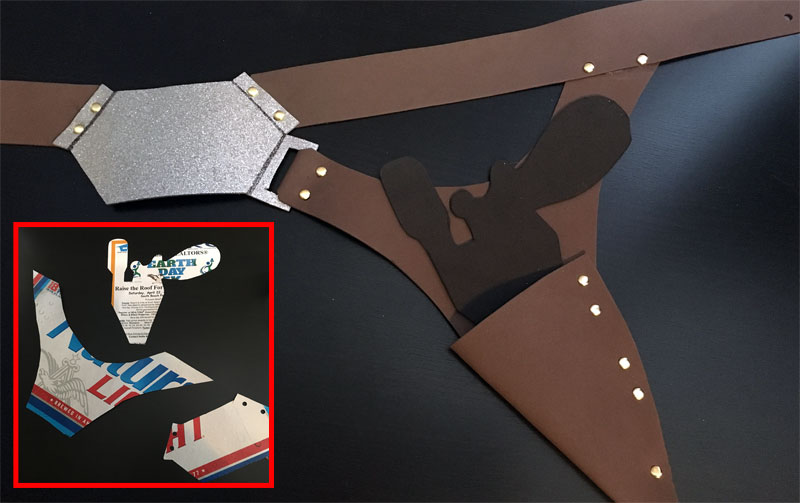 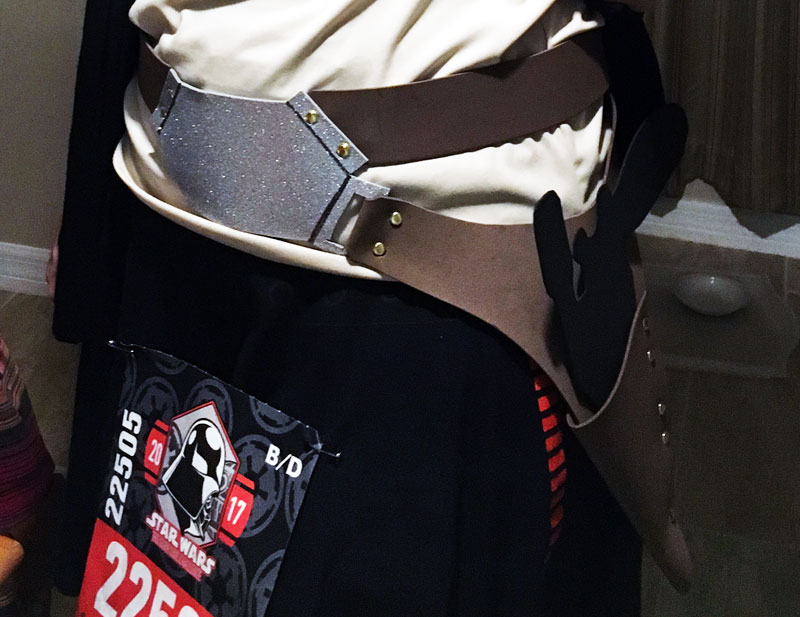 I didn't have a lot of confidence that my rinky dink belt would last the entire 6.2 miles, but it did! I brought along extra safety pins in case of costume malfunction (I had a worry that the vest might flop around as well) and while standing in line for a photo I did end up pinning the belt in place to my shirt because it kept shifting to one side when I was running. Anyway it might not look like much but I was pretty pleased with how it came out for my first attempt at a DIY running costume prop piece.

Training & Goals
Same as yesterday -- I was well-prepared for this mid-distance race since I'd be running at half-speed or slower. Have a good time, and don't get hurt.

Race Day: April 22, 2017
Arthur came with me for the 10K. We left home at about 3:30AM and Arthur dropped me off at the starting area at Magic Kingdom for this point-to-point race that would finish at Epcot. Runner drop-off was pretty great from this runner's perspective; it was a short walk to the starting area and then on to the 10K corrals. I had time to get a photo with Kylo Ren ("hello, son" -- no reaction) before getting into my corral. 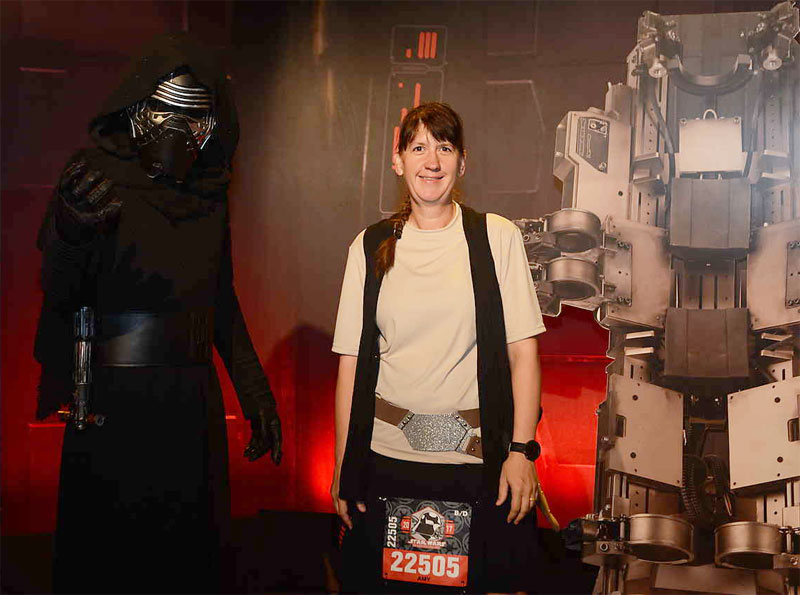 On the way I saw the "balloon ladies" so I asked for a quick photo. This team of runners starts at the back of the last corral and maintains a 16-minute-mile pace, which is the required minimum for runDisney races. If you fall behind the balloon ladies you are in danger of being swept from the course and not finishing the race. For this reason they are deeply feared by some runners. 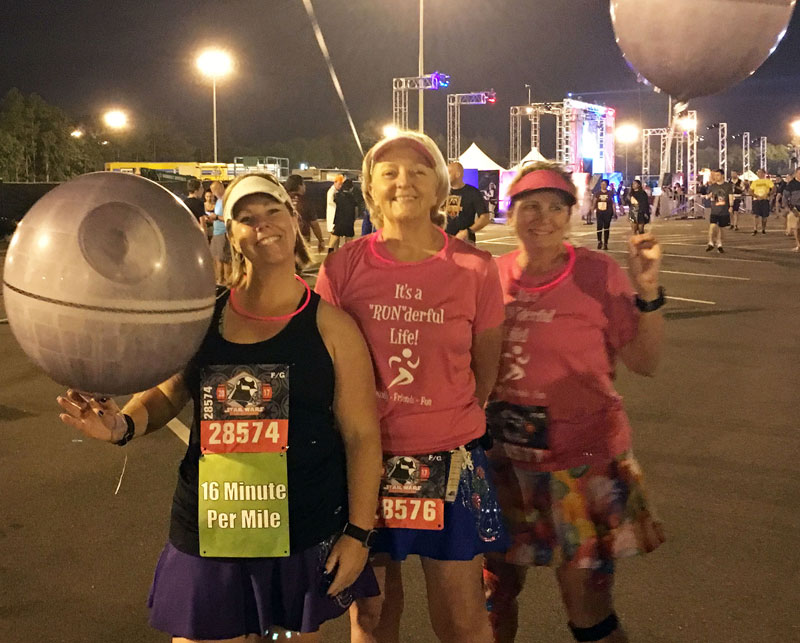 The course would take us from the Magic Kingdom parking area, along World Drive, through the Boardwalk area, and through part of Epcot to the finish line. It was 66°F at the start with 94% humidity. I was in Corral B and started running at 5:39AM (5:30AM start for the elites). 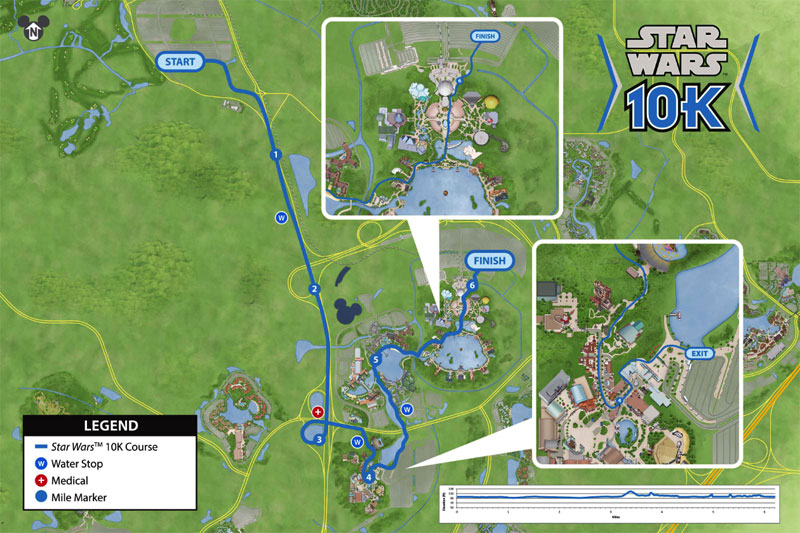 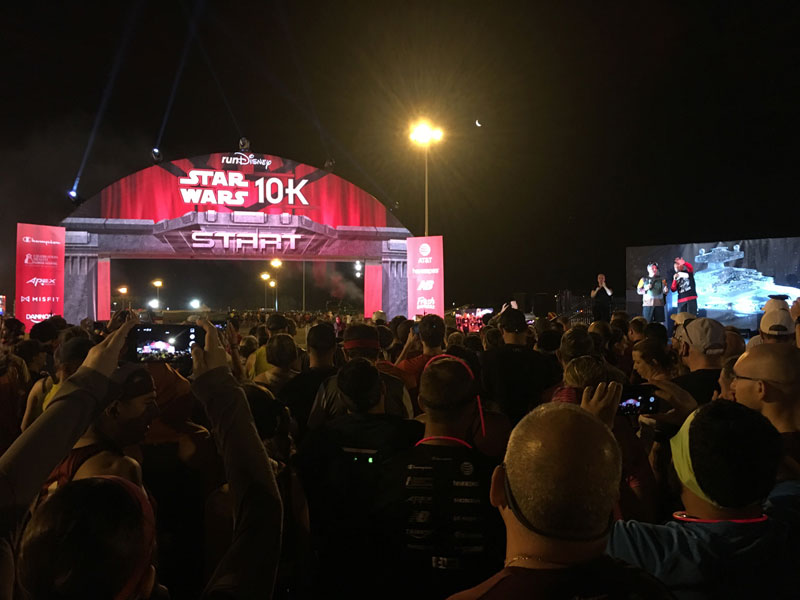 Mile 1: 11:36
Shortly after hitting the road a school marching band was playing Star Wars music along the side of the road. The best! The first photo stop for the 10K was R2D2 once more, with the expected long line. I skipped the droid again. We exited the Magic Kingdom area under the parking lot arches as we headed on to mile 2. 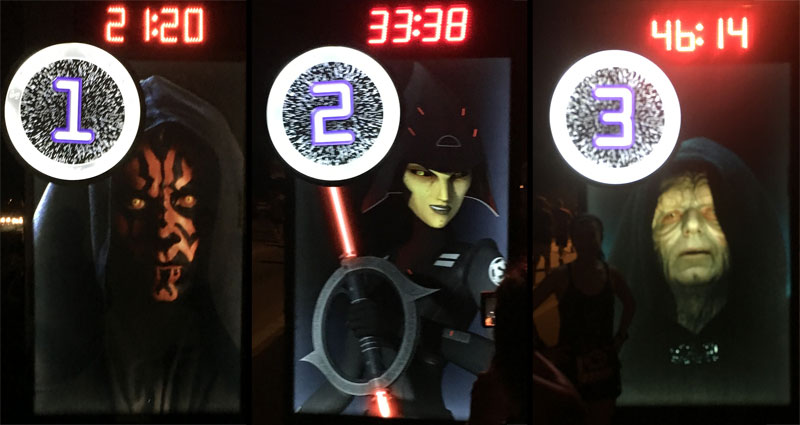 Mile 2: 12:04
Sabine & Ezra's photo op was placed along the road in this mile. I was just taking it easy and kept moving. 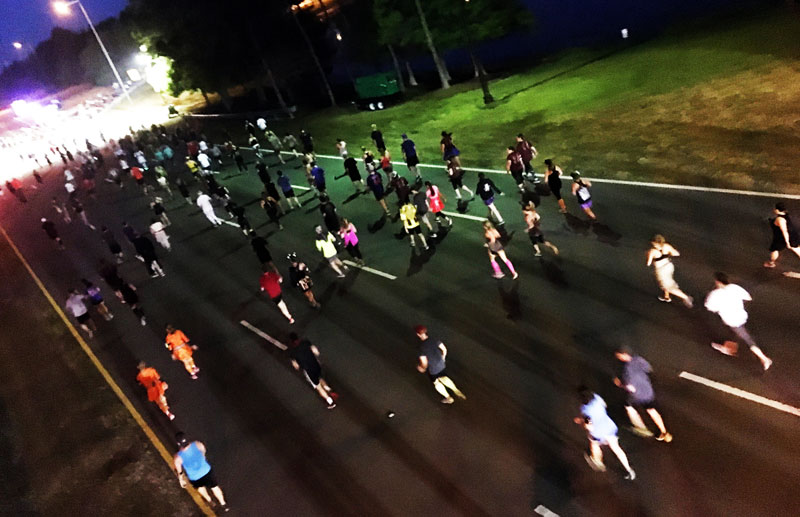 Darth Maul was set up just outside of Hollywood Studios so I stopped for a quick picture. 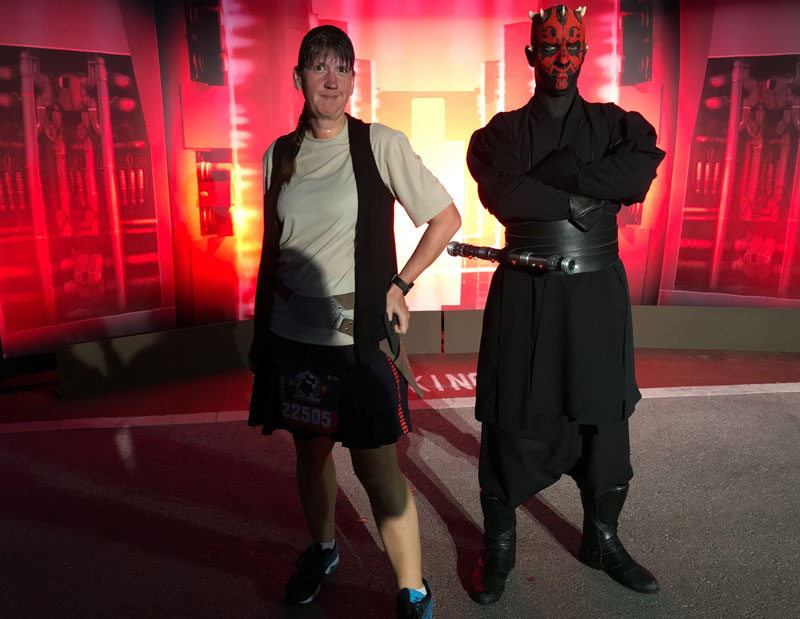 Next we were inside the park proper, greeted by a large contigent of the 501st Legion. Photo time! The 501st are what make the 10K and half marathon the best runDisney races around. It was a bit chaotic with runners forming short lines by each character but some people jumping from photo to photo with little waiting and others squeezing in for quick selfies. For the most part runners could pass their camera to the next runner in line for minimal waiting, though Disney castmembers did arrange a couple of lines for some characters and even took photos for us runners. It was a lot of fun to see these guys and grab some photos. Unfortunately the backlighting was intense so some photos didn't come out very well. 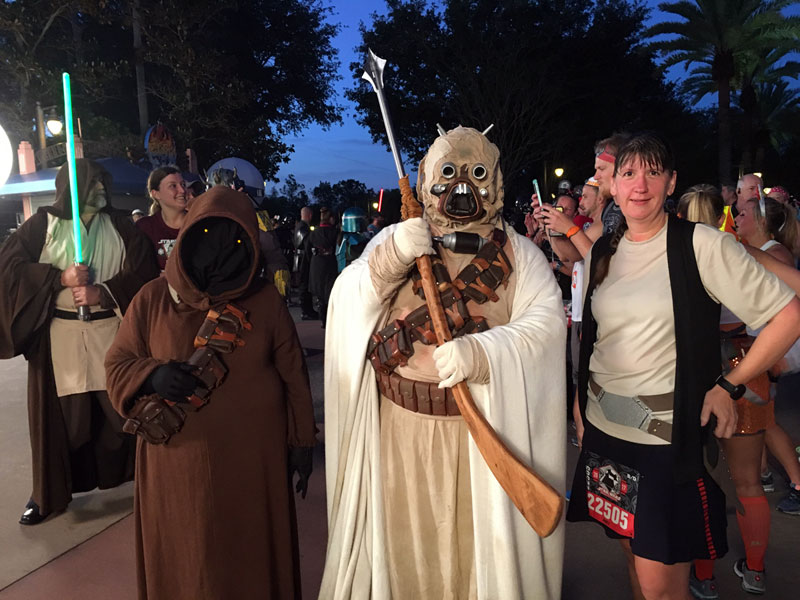 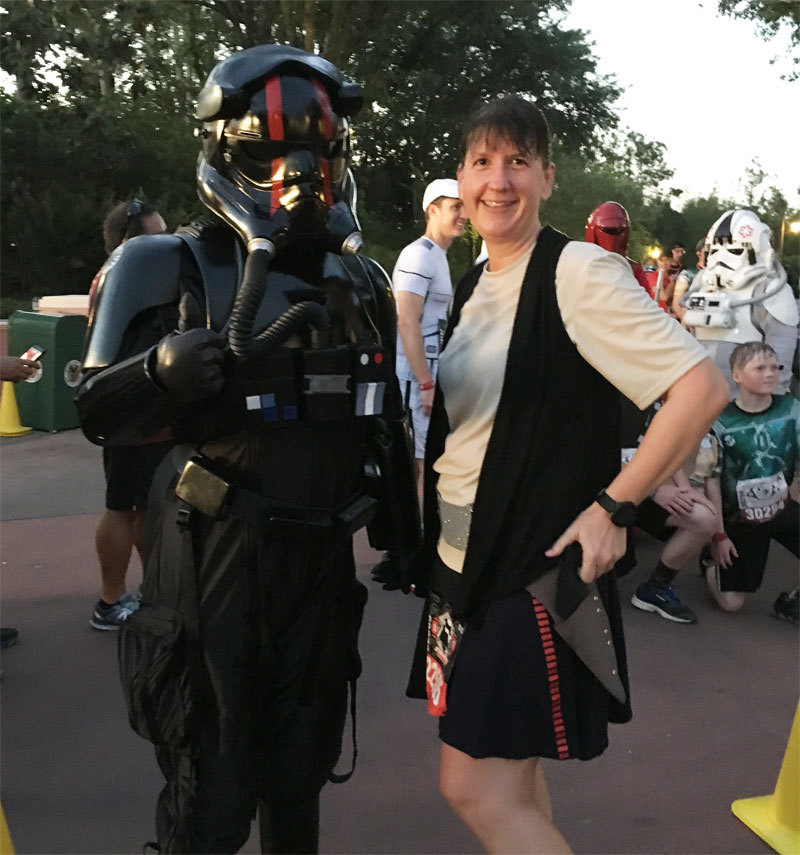 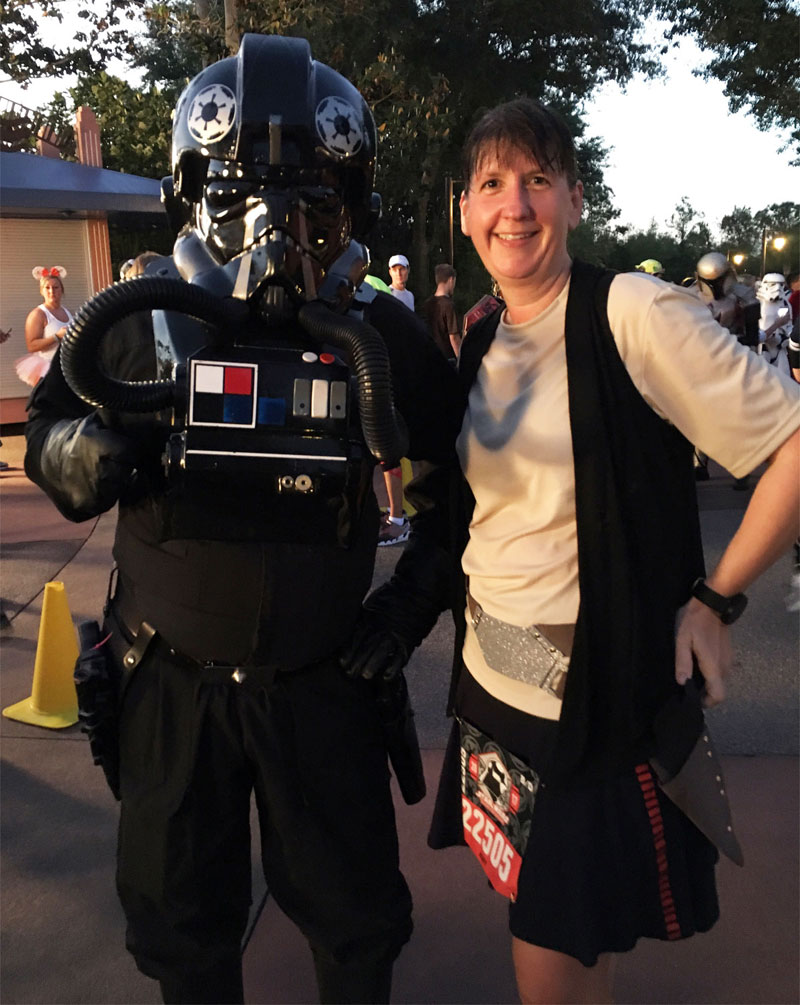 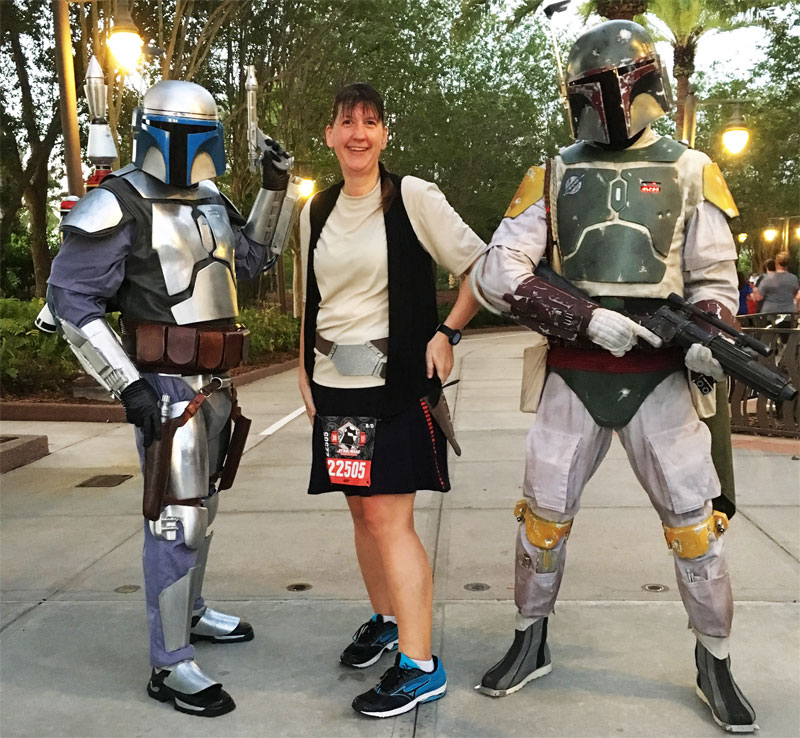 A little bit further into the park we were greeted by two sets of two Stormtrooper "official" Disney photo ops. 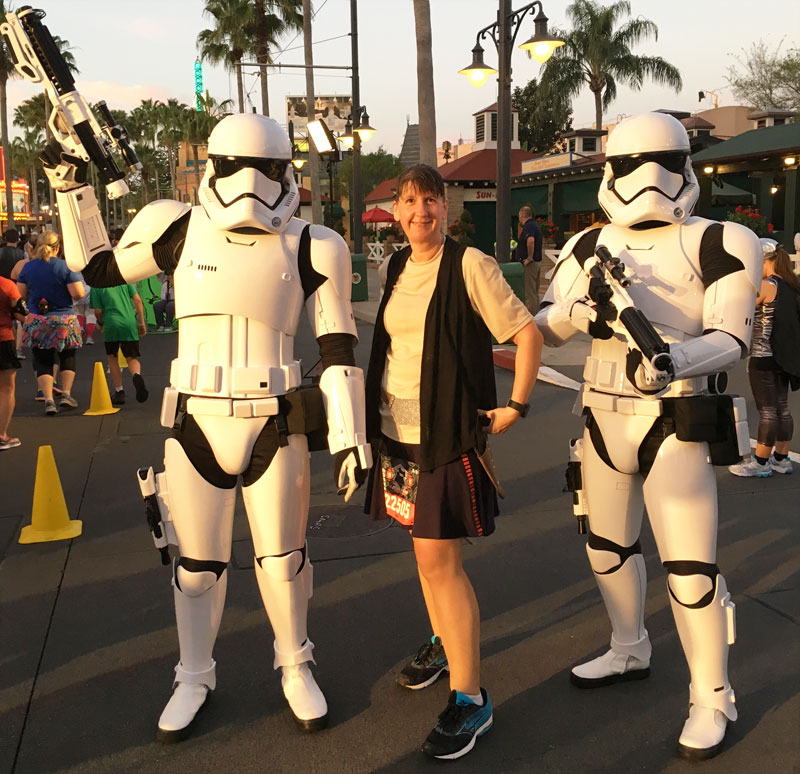 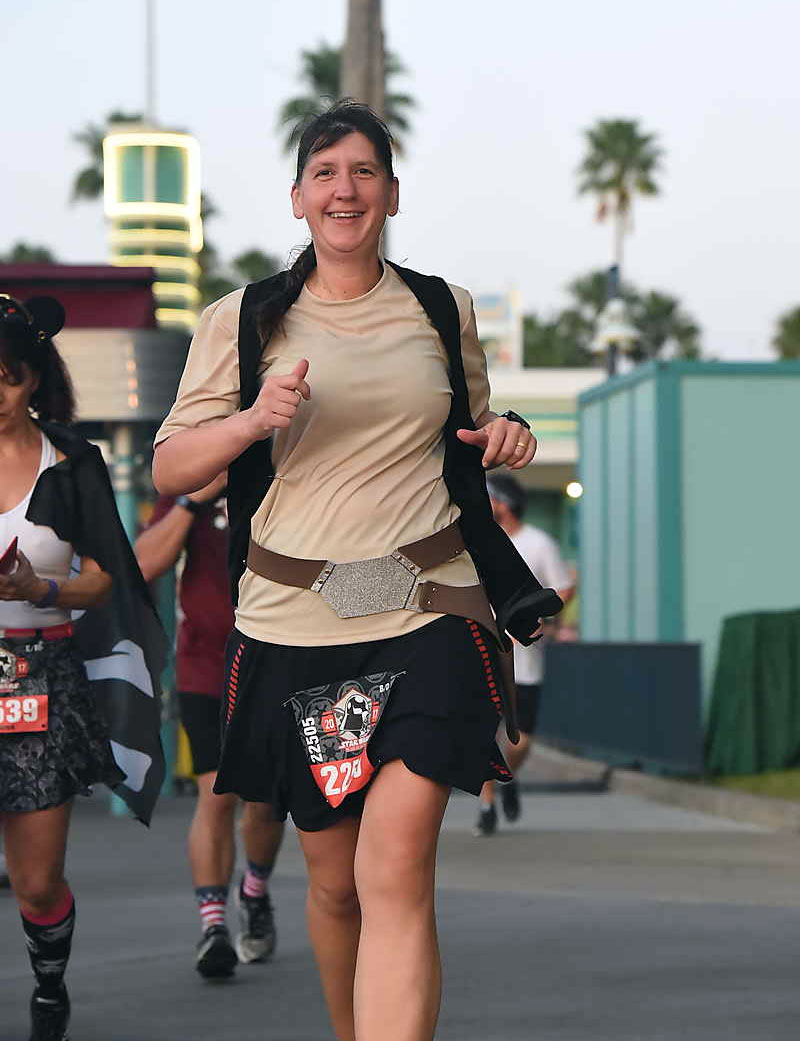 A pair of Speeder Bikes was out for photo ops but I thought it would be sad to have that photo taken solo so I skipped it.

Mile 5: 16:58
Next we ran from Hollywood Studios out to the Boardwalk area, where there were lots of spectators cheering on the runners.

Mile 6+: 13:45, 10:57
The final mile took us from Boardwalk through part of Epcot to the parking lot finish line. Again we passed Chewie posing for photos on the way into Epcot. And again a pair of Stormtroopers patrolled the stage in front of Spaceship Earth for a fun photo op. Just out of Epcot we were greeted by another fun group from the 501st. 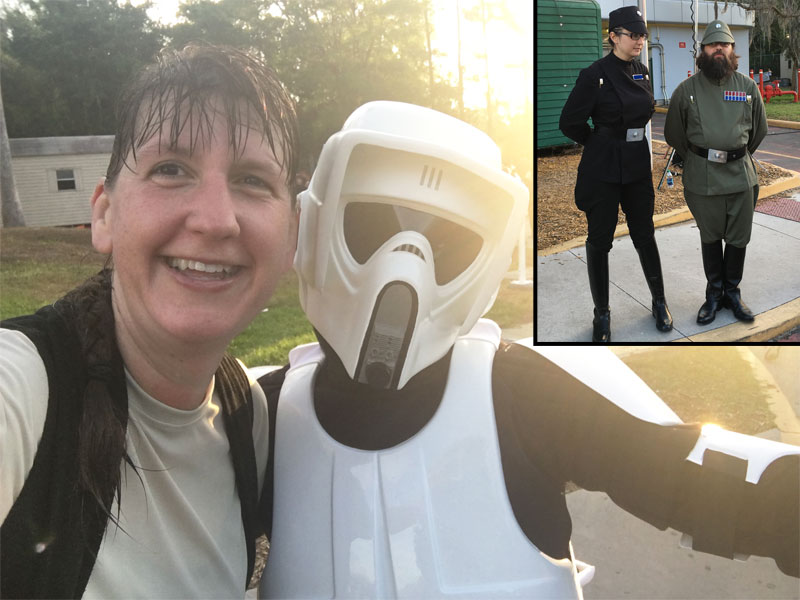 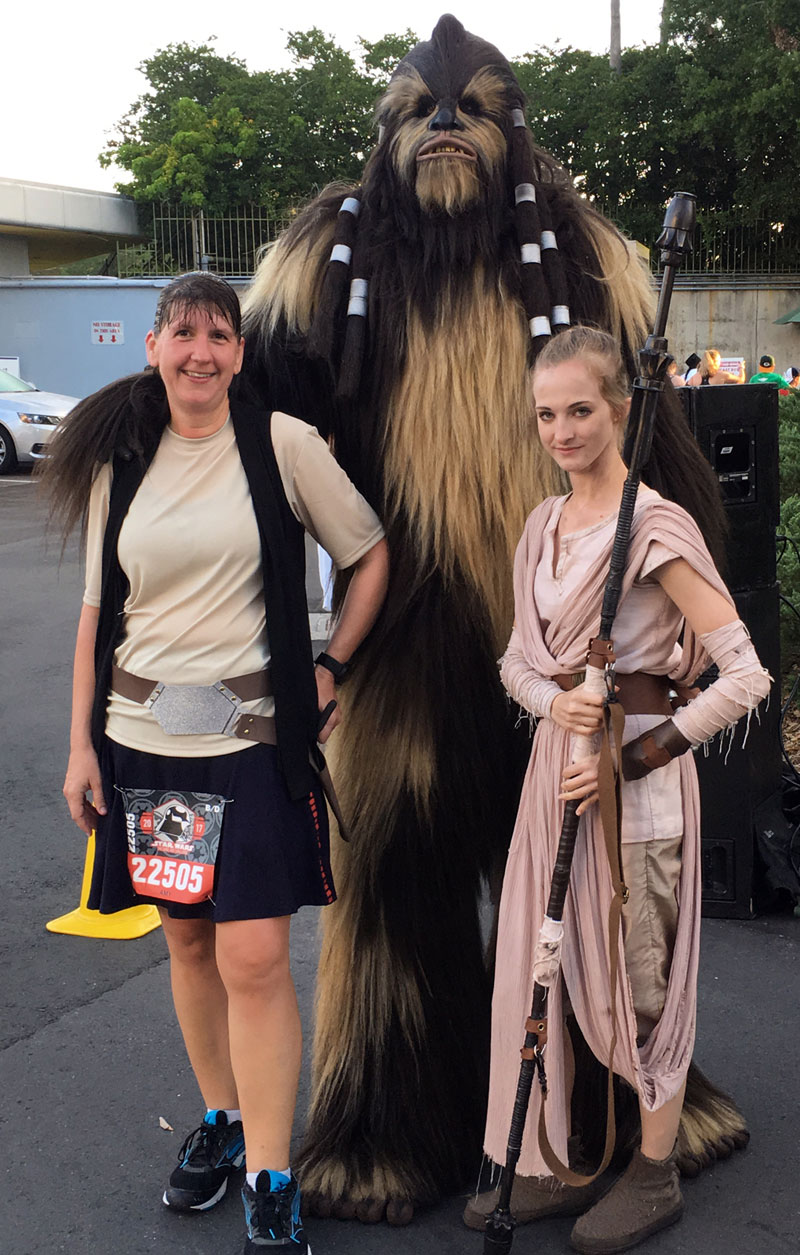 Then it was a quick sprint across the parking lot to finish. 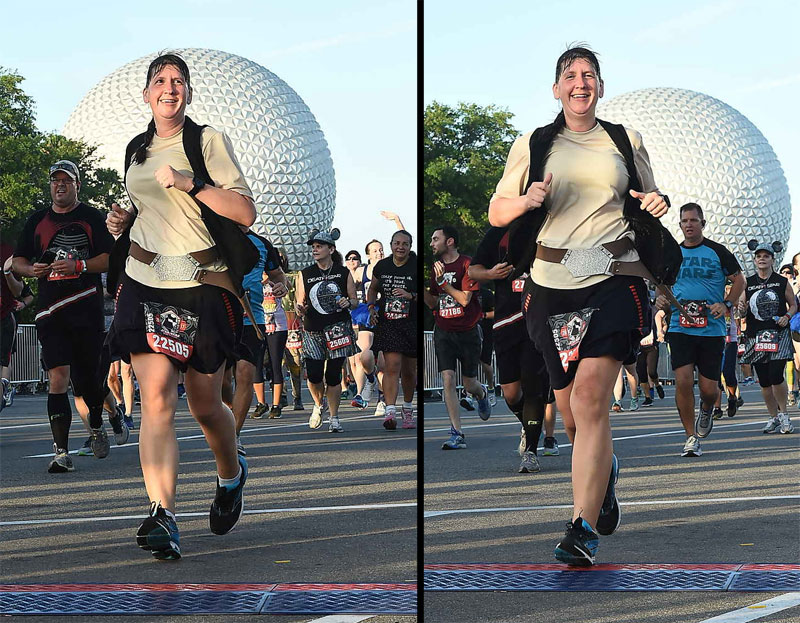 After the race I met up with Arthur and we headed to Art of Animation so I could freshen up and change and we could have some breakfast from the food court. Next we headed to Hollywood Studios which wasn't too busy when we arrived about 15 minutes after rope drop. We rode a few rides and then met with BB8 and Chewie in the Launch Bay. Chewie gave us both a big hug but after he had a look at my medal, which features an Imperial Stormtrooper, he acted mad at me. I tried to explain but he wasn't having it. 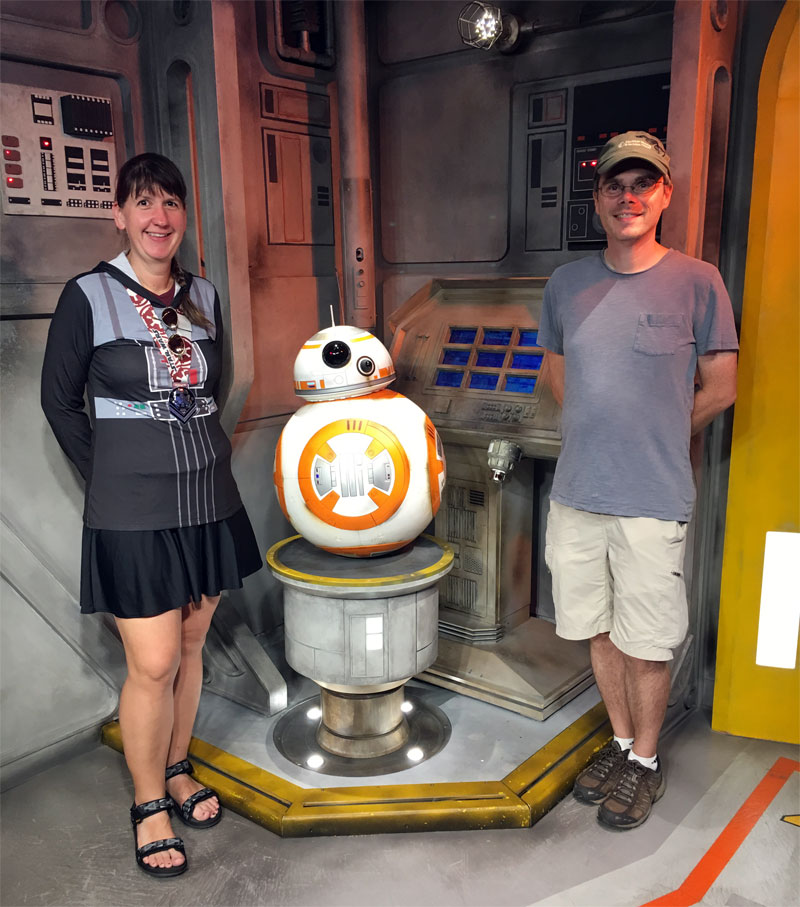 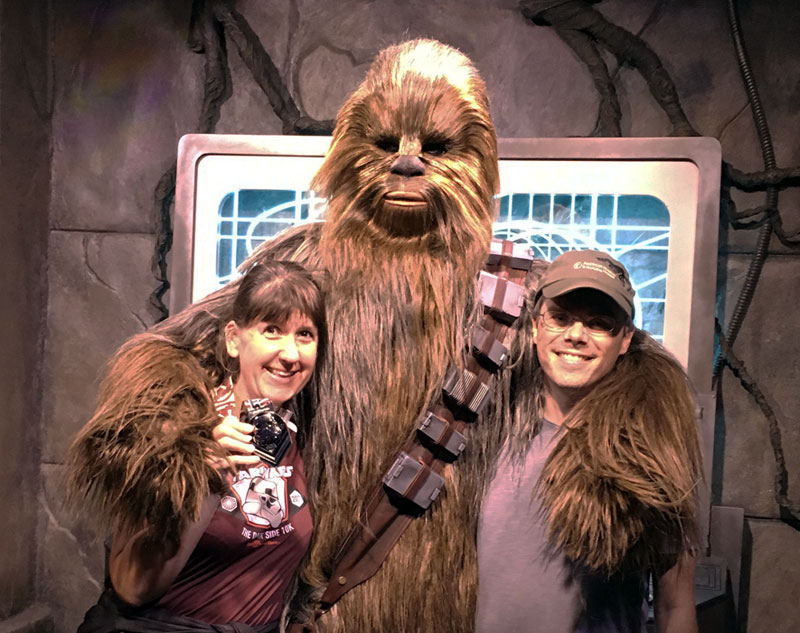 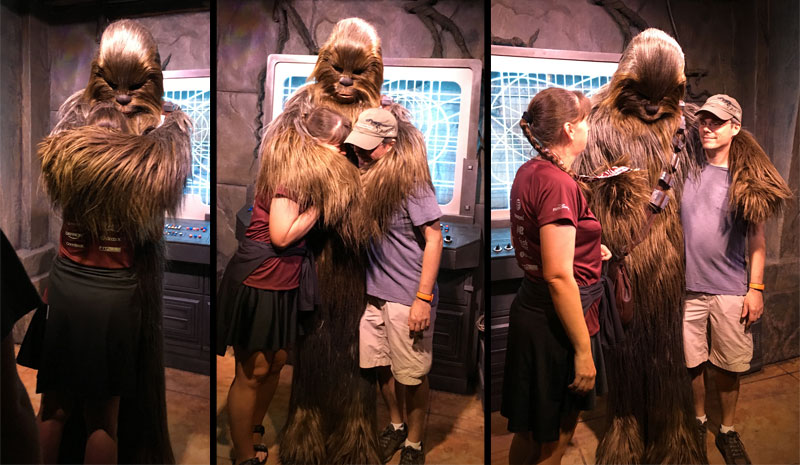 Back out in the Launch Bay a Jawa tried to steal my medal when we asked for a selfie. 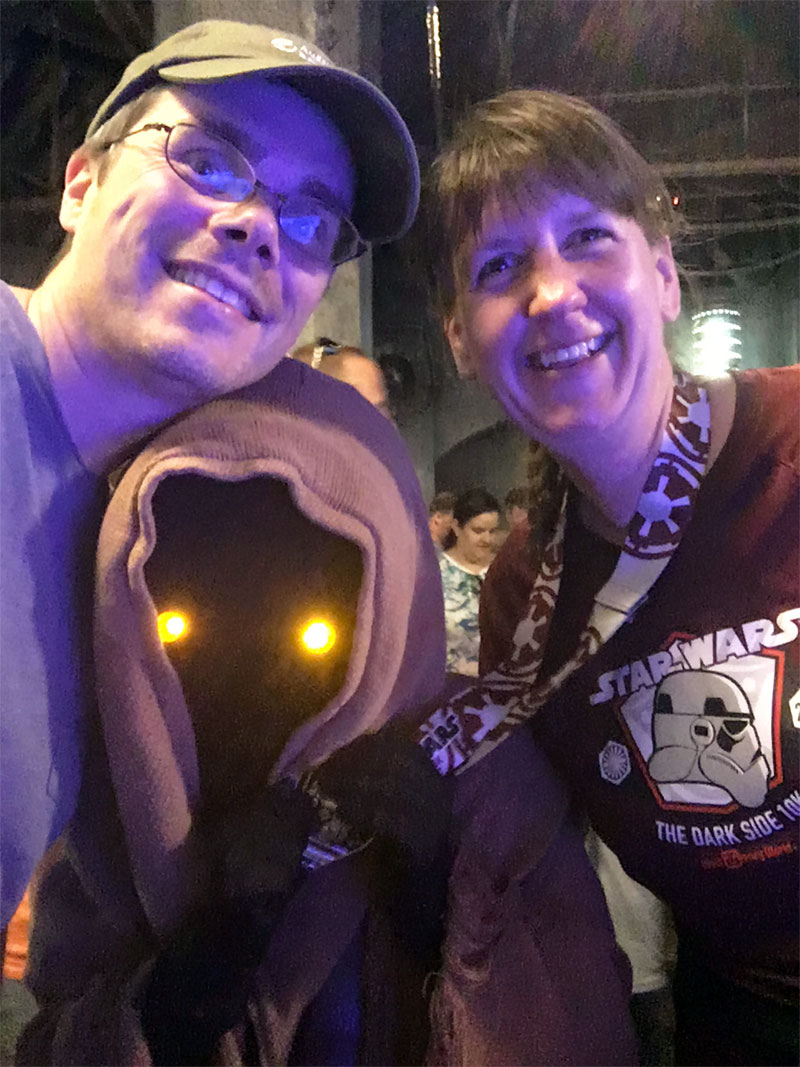 Finally we headed to Starbucks to get a celebratory Darth Cupcake before heading home in the afternoon. 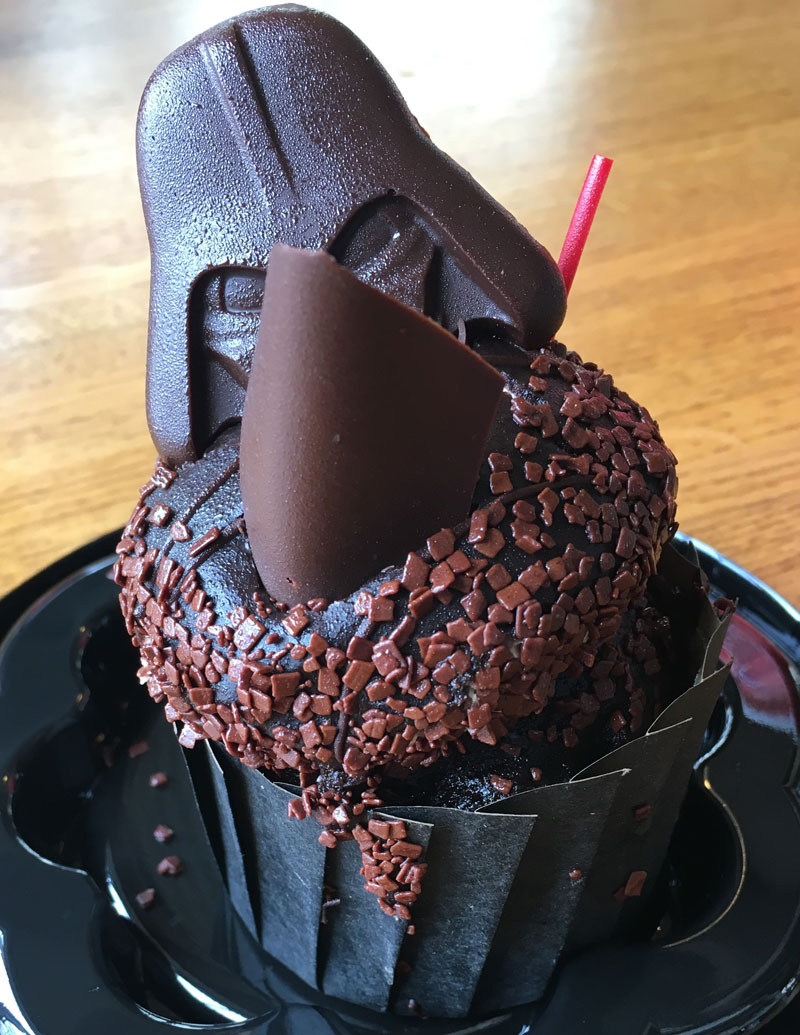 Recommendation
So much fun for Disney and Star Wars fans. Also, so expensive, so crowded, so hot (Florida in April). I love it! 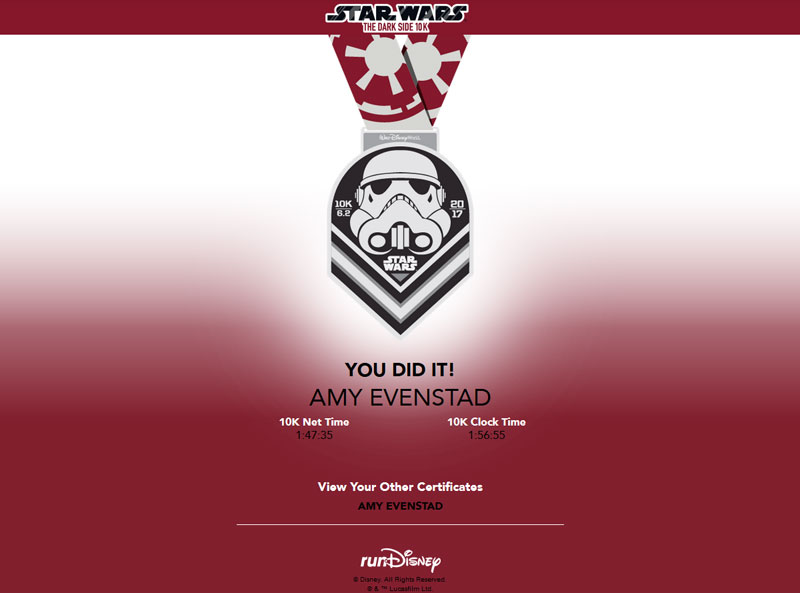 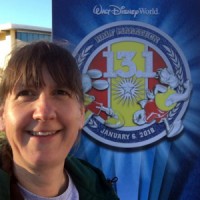 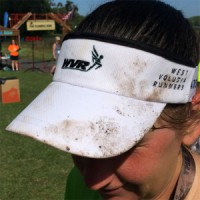 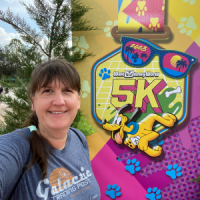