This run would be another fairly standard Disney route, taking us from the Epcot parking lot, through the park and around Crescent Lake, back through Epcot to the parking lot finish.

I dressed up as classic Donald Duck, using a white Sparkle Skirt with long yellow socks, a blue tech shirt with simple DIY embellishment. I wore a thermal undershirt and white armsleeves underneath. The final piece was a fun vintage hat I found at Goodwill some months ago. 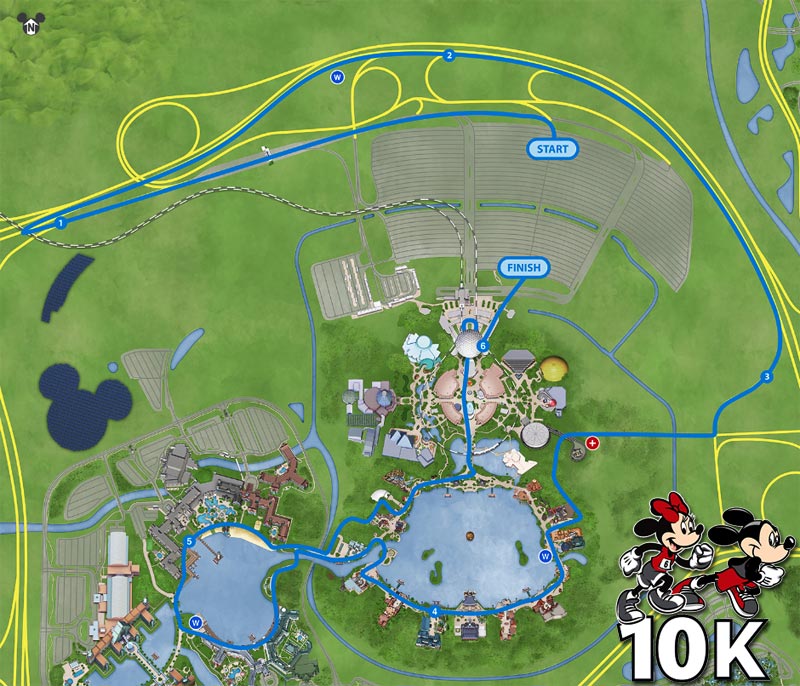 Training & Goals
The last 3+ months had been all about Dopey training, with the goal being to finish and have fun.

Race Day: January 5, 2018
I left home at about 3:19AM and drove down I-4 with very little traffic. I had the car parked by 4:13AM. I headed to the staging area and stood in a long line to have my photo taken with Dopey (I hoped to get him each morning). Because of the frigid cold, I brought along throw-away pants, a throw-away hoodie, and my warm beanie hat from the day before.

The line for Dopey was long -- really long. Cast members minding the line kept warning us that those of us towards the back wouldn't make it. Finally the last of us reached the front of the line and the cast members gave us the 5 minute warning. I think most of us got our photo but the staging area was eerily deserted when I headed out to the corrals. 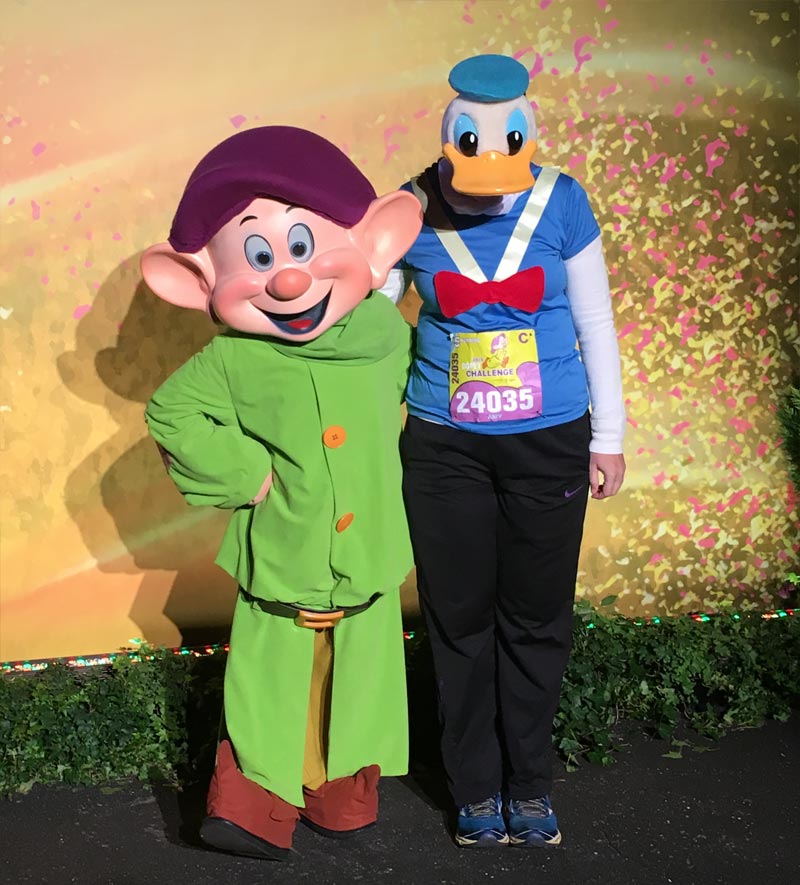 Since it was so close to race time I made the last-minute decision to gEARcheck my throwaway hoodie and pants before heading to the corrals. I got to keep my clothes (picked them up after the run) but I ended up missing the cut-off for my corral! I had to start in D instead of C. Worth it! I was glad I got the picture with Dopey out of the way before the race.

It was warmer than Thursday but still cold at race time. By the time I started running at 5:55AM it was 37°F.

During the creep up to the start I picked up a discarded runDisney mylar blanket to keep warm. Right before reaching the start I dumped the mylar and picked up a fleece blanket that I kept over my shoulders as a shawl for the first couple of miles. 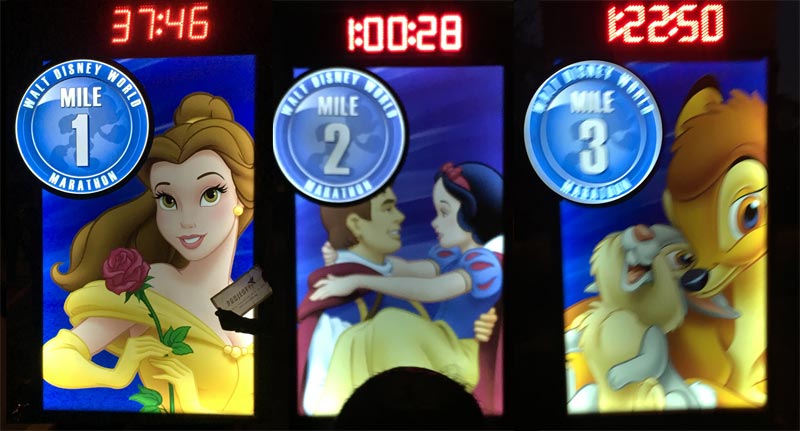 Mile 1: 12:26
My hat fit on my head but it was a little bit uncomfortable and I worried about it falling off, so I carried it in my hand. I noticed it was making a flapping sound and I was dismayed to see that the old plastic snapback had broken! Oh no!

Mile 2: 21:32
I decided to stop for a photo with Meeko. With my warm beanie on my head, the Donald hat stayed on, even with my head down, at least when I wasn't running. Good news. I picked up my blanket after the photo and ran on. 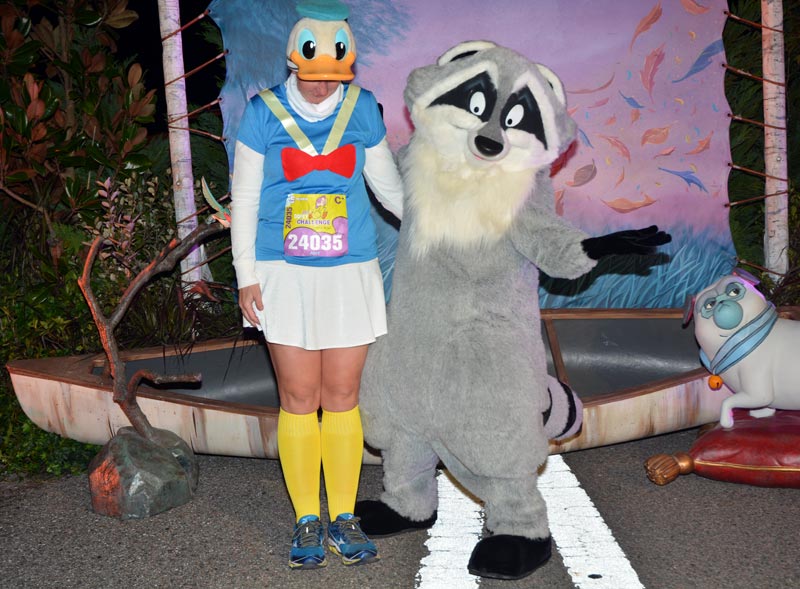 Mile 3: 21:25
The first three miles were on the highway around Epcot. There were three photo ops: Meeko; Flik & Atta from A Bug's Life; and the Evil Queen in Wicked Witch mode. I skipped the ants and stood in line for the old hag. After about 10 minutes the line didn't seem to be moving so I changed my mind and got back on course, discarding my blanket along the side somewhere around here.

I did stop for a selfie by a parade bus (sweeper bus).

I should have practiced taking selfies with the hat -- it was pretty hit or miss.

Mile 4: 14:57
Finally we reached World Showcase. Backstage there were some stilt walkers and I snapped some pictures of old Maelstrom ride boats along the side of the road. I also ran by Pinocchio in Italy. There always seems to be a huge line for the boy puppet. I tested out running with Donald the hat on and while it stayed on, it shifted around from side to side a lot. Oh well. 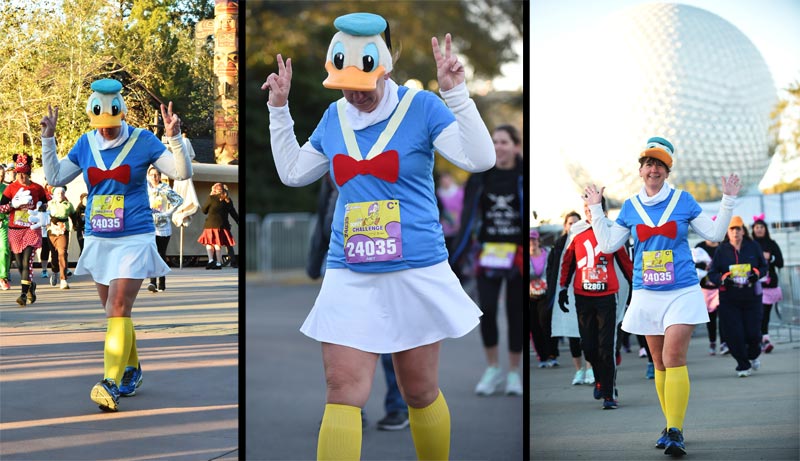 Mile 5: 18:36
I ran by Marie in France and Vacation Genie in his usual spot by ESPN Zone. There were some enthusiastic spectators with signs around the Boardwalk. 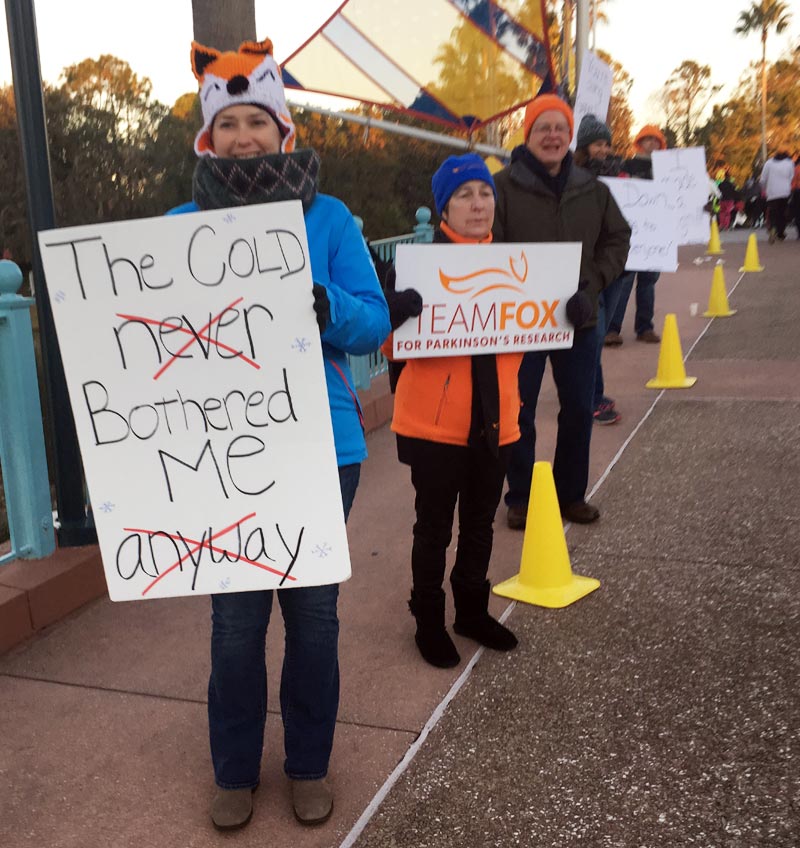 Just before the finish there were some more stilt walkers out for photos. 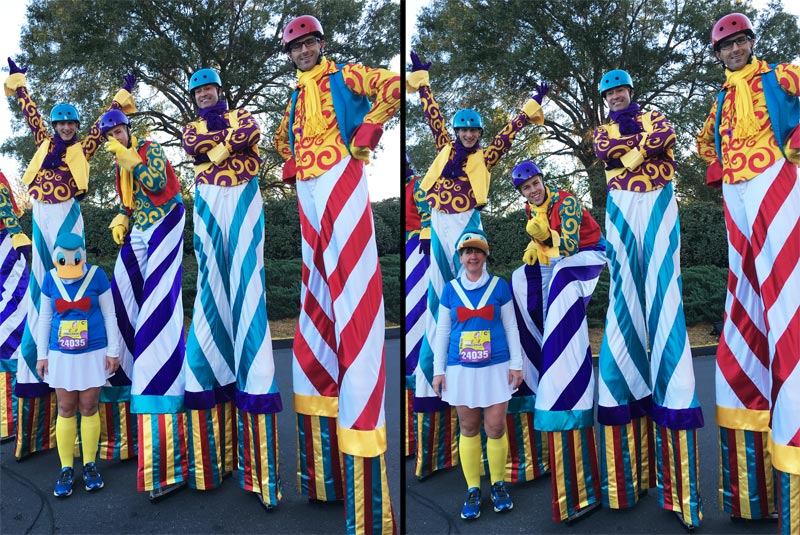 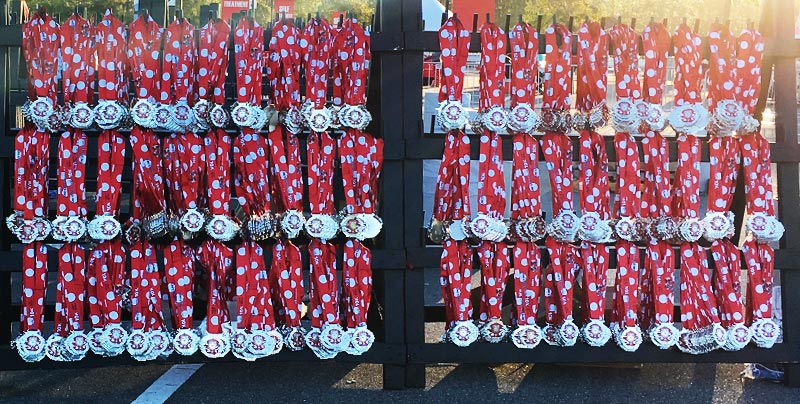 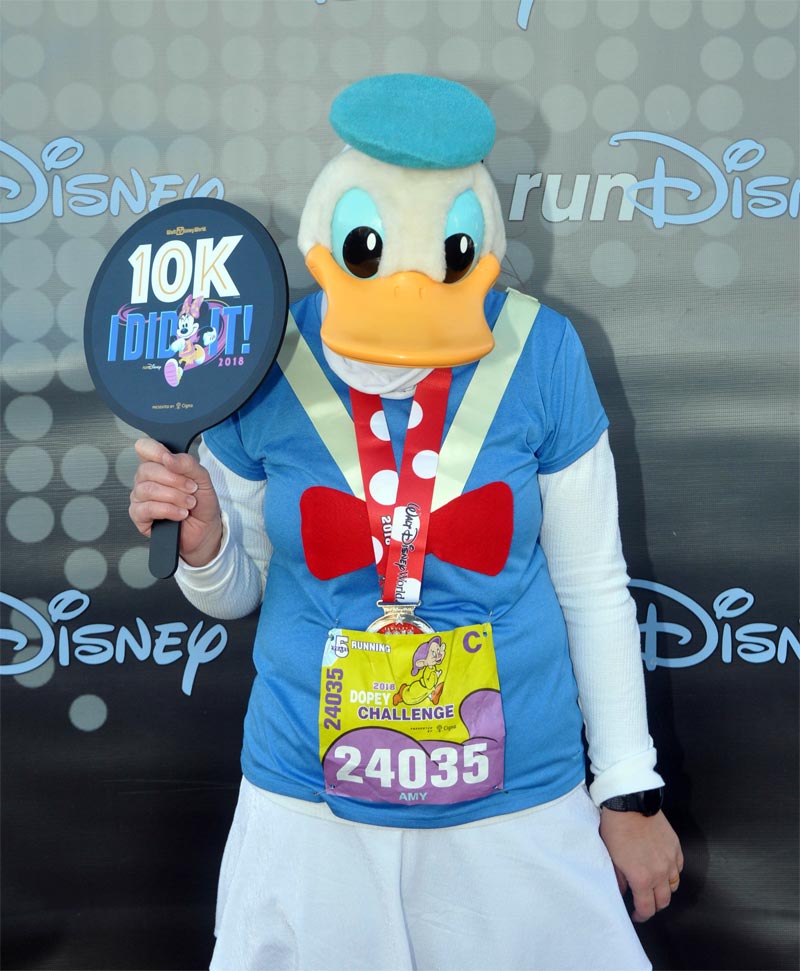 After the Race
I was glad I remembered to pick up my throwaway clothes from gEARcheck. Since I got my photo with Dopey before the race I didn't see any reason to linger. It was still very cold. 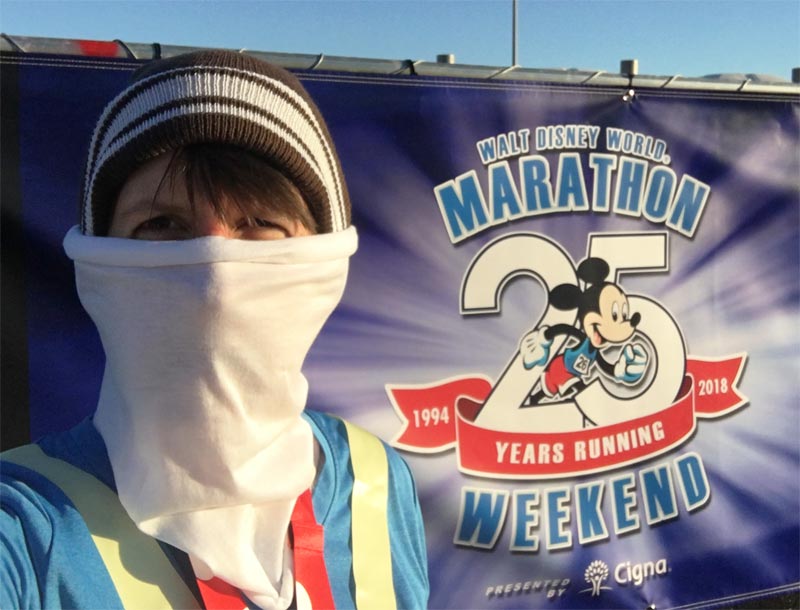 I headed home to collect Arthur -- we'd return to Disney later in the day to look around Disney Springs, have dinner in the area, and check into All-Star Sports for the following two nights. Just a Goofy 39.3 miles to go! 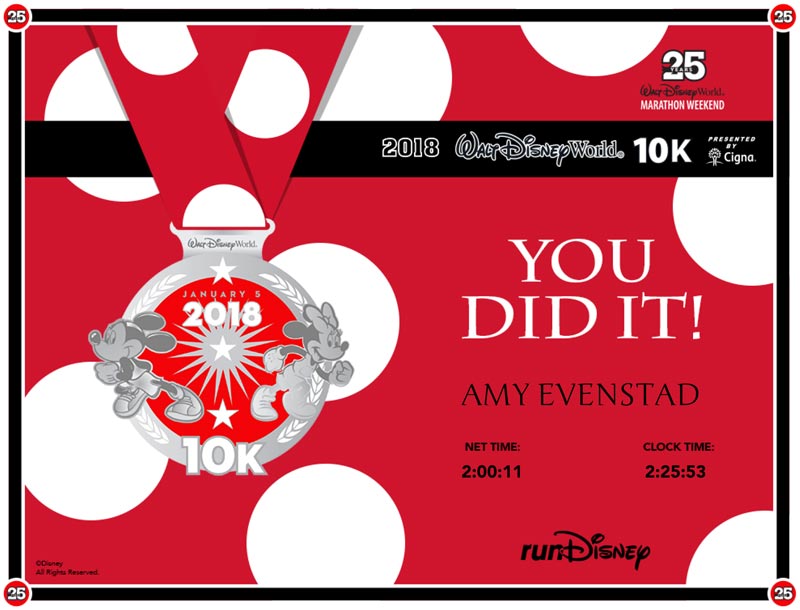 *I often forget to turn off my Garmin after a race, plus there was obviously something wonky going on with my GPS as it gave me .7 miles overage, so those split times are skewed. 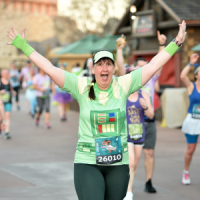 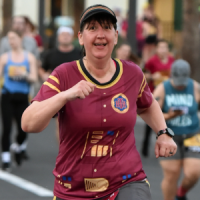